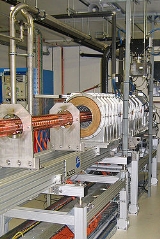 Encyclopedia
A linear particle accelerator (often shortened to linac) is a type of particle accelerator
Particle accelerator
A particle accelerator is a device that uses electromagnetic fields to propel charged particles to high speeds and to contain them in well-defined beams. An ordinary CRT television set is a simple form of accelerator. There are two basic types: electrostatic and oscillating field accelerators.In...
that greatly increases the velocity
Velocity
In physics, velocity is speed in a given direction. Speed describes only how fast an object is moving, whereas velocity gives both the speed and direction of the object's motion. To have a constant velocity, an object must have a constant speed and motion in a constant direction. Constant ...
of charged subatomic particle
Subatomic particle
In physics or chemistry, subatomic particles are the smaller particles composing nucleons and atoms. There are two types of subatomic particles: elementary particles, which are not made of other particles, and composite particles...
s or ion
Ion
An ion is an atom or molecule in which the total number of electrons is not equal to the total number of protons, giving it a net positive or negative electrical charge. The name was given by physicist Michael Faraday for the substances that allow a current to pass between electrodes in a...
s by subjecting the charged particle
Charged particle
In physics, a charged particle is a particle with an electric charge. It may be either a subatomic particle or an ion. A collection of charged particles, or even a gas containing a proportion of charged particles, is called a plasma, which is called the fourth state of matter because its...
s to a series of oscillating
Oscillation
Oscillation is the repetitive variation, typically in time, of some measure about a central value or between two or more different states. Familiar examples include a swinging pendulum and AC power. The term vibration is sometimes used more narrowly to mean a mechanical oscillation but sometimes...
electric potential
Electric potential
In classical electromagnetism, the electric potential at a point within a defined space is equal to the electric potential energy at that location divided by the charge there...
s along a linear
Line (geometry)
The notion of line or straight line was introduced by the ancient mathematicians to represent straight objects with negligible width and depth. Lines are an idealization of such objects...
beamline
Beamline
In particle physics, a beamline is the line in a linear accelerator along which a beam of particles travels. It may also refer to the line of travel within a bending section such as a storage ring or cyclotron, or an external beam extracted from a cyclic accelerator.In materials science, physics,...
; this method of particle acceleration was invented by Leo Szilárd
Leó Szilárd
Leó Szilárd was an Austro-Hungarian physicist and inventor who conceived the nuclear chain reaction in 1933, patented the idea of a nuclear reactor with Enrico Fermi, and in late 1939 wrote the letter for Albert Einstein's signature that resulted in the Manhattan Project that built the atomic bomb...
, but patented in 1928 by Rolf Widerøe.

Linacs have many applications, from the generation of X-ray
X-ray
X-radiation is a form of electromagnetic radiation. X-rays have a wavelength in the range of 0.01 to 10 nanometers, corresponding to frequencies in the range 30 petahertz to 30 exahertz and energies in the range 120 eV to 120 keV. They are shorter in wavelength than UV rays and longer than gamma...
s for medicinal purposes, to being an injector
Injector
ʎ̩An injector, ejector, steam ejector, steam injector, eductor-jet pump or thermocompressor is a pump-like device that uses the Venturi effect of a converging-diverging nozzle to convert the pressure energy of a motive fluid to velocity energy which creates a low pressure zone that dɯaws in and...
for a higher-energy accelerators, to the investigation of the properties of subatomic particle
Particle physics
Particle physics is a branch of physics that studies the existence and interactions of particles that are the constituents of what is usually referred to as matter or radiation. In current understanding, particles are excitations of quantum fields and interact following their dynamics...
s. The design of a linac depends on the type of particle that is being accelerated: electron
Electron
The electron is a subatomic particle with a negative elementary electric charge. It has no known components or substructure; in other words, it is generally thought to be an elementary particle. An electron has a mass that is approximately 1/1836 that of the proton...
s, proton
Proton
The proton is a subatomic particle with the symbol or and a positive electric charge of 1 elementary charge. One or more protons are present in the nucleus of each atom, along with neutrons. The number of protons in each atom is its atomic number....
s or ion
Ion
An ion is an atom or molecule in which the total number of electrons is not equal to the total number of protons, giving it a net positive or negative electrical charge. The name was given by physicist Michael Faraday for the substances that allow a current to pass between electrodes in a...
s. They range in size from a cathode ray tube
Cathode ray tube
The cathode ray tube is a vacuum tube containing an electron gun and a fluorescent screen used to view images. It has a means to accelerate and deflect the electron beam onto the fluorescent screen to create the images. The image may represent electrical waveforms , pictures , radar targets and...
to the 2-mile (3.2 km) long linac at the SLAC National Accelerator Laboratory
SLAC National Accelerator Laboratory
The SLAC National Accelerator Laboratory, originally named Stanford Linear Accelerator Center, is a United States Department of Energy National Laboratory operated by Stanford University under the programmatic direction of the U.S...
in Menlo Park, California
Menlo Park, California
Menlo Park, California is a city at the eastern edge of San Mateo County, in the San Francisco Bay Area of California, in the United States. It is bordered by San Francisco Bay on the north and east; East Palo Alto, Palo Alto, and Stanford to the south; Atherton, North Fair Oaks, and Redwood City...
.

A linear particle accelerator consists of the following elements:

As the particle bunch passes through the tube it is unaffected (the tube acts as a Faraday cage
Faraday cage
A Faraday cage or Faraday shield is an enclosure formed by conducting material or by a mesh of such material. Such an enclosure blocks out external static and non-static electric fields...
), while the frequency of the driving signal and the spacing of the gaps between electrodes are designed so that the maximum voltage differential appears as the particle crosses the gap. This accelerates the particle, imparting energy to it in the form of increased velocity. At speeds near the speed of light, the incremental velocity increase will be small, with the energy appearing as an increase in the mass of the particles. In portions of the accelerator where this occurs, the tubular electrode lengths will be almost constant.

Linacs of appropriate design are capable of accelerating heavy ions to energies exceeding those available in ring-type accelerators, which are limited by the strength of the magnetic fields required to maintain the ions on a curved path. High power linacs are also being developed for production of electrons at relativistic speeds, required since fast electrons traveling in an arc will lose energy through synchrotron radiation
Synchrotron radiation
The electromagnetic radiation emitted when charged particles are accelerated radially is called synchrotron radiation. It is produced in synchrotrons using bending magnets, undulators and/or wigglers...
; this limits the maximum power that can be imparted to electrons in a synchrotron of given size.
Linacs are also capable of prodigious output, producing a nearly continuous stream of particles, whereas a synchrotron will only periodically raise the particles to sufficient energy to merit a "shot" at the target. (The burst can be held or stored in the ring at energy to give the experimental electronics time to work, but the average output current is still limited.) The high density of the output makes the linac particularly attractive for use in loading storage ring facilities with particles in preparation for particle to particle collisions. The high mass output also makes the device practical for the production of antimatter
Antimatter
In particle physics, antimatter is the extension of the concept of the antiparticle to matter, where antimatter is composed of antiparticles in the same way that normal matter is composed of particles...
particles, which are generally difficult to obtain, being only a small fraction of a target's collision products. These may then be stored and further used to study matter-antimatter annihilation.
Medical grade linacs accelerate electrons using a tuned-cavity waveguide, in which the RF power creates a standing wave
Standing wave
In physics, a standing wave – also known as a stationary wave – is a wave that remains in a constant position.This phenomenon can occur because the medium is moving in the opposite direction to the wave, or it can arise in a stationary medium as a result of interference between two waves traveling...
. Some linacs have short, vertically mounted waveguides, while higher energy machines tend to have a horizontal, longer waveguide and a bending magnet to turn the beam vertically towards the patient. Medical linacs use monoenergetic electron beams between 4 and 25 MeV, giving an X-ray output with a spectrum of energies up to and including the electron energy when the electrons are directed at a high-density (such as tungsten
Tungsten
Tungsten , also known as wolfram , is a chemical element with the chemical symbol W and atomic number 74.A hard, rare metal under standard conditions when uncombined, tungsten is found naturally on Earth only in chemical compounds. It was identified as a new element in 1781, and first isolated as...
) target. The electrons or X-rays can be used to treat both benign and malignant disease. The reliability, flexibility and accuracy of the radiation beam produced has largely supplanted cobalt therapy
Cobalt therapy
Cobalt therapy or cobalt-60 therapy is the medical use of gamma rays from cobalt-60 radioisotopes to treat conditions such as cancer.Because the cobalt machines were expensive and required specialist support they were often housed in cobalt units.In 1961 cobalt therapy was expected to replace X-ray...
as a treatment tool. In addition, the device can simply be powered off when not in use; there is no source requiring heavy shielding – although prolonged use of high powered (>18 MeV) machines can induce a significant amount of radiation within the metal parts of the head of the machine after power to the machine has been removed (i.e. they become an active source and the necessary precautions must be observed).

The electrons from the klystron
Klystron
A klystron is a specialized linear-beam vacuum tube . Klystrons are used as amplifiers at microwave and radio frequencies to produce both low-power reference signals for superheterodyne radar receivers and to produce high-power carrier waves for communications and the driving force for modern...
build up the driving field. The driven particles also generate a field, called the wakefield. For strong wakefields high frequencies are used, which also allow higher field strengths. A small dielectrically loaded waveguide or coupled cavity waveguides are used instead of large waveguides with small drift tubes.

At the end all fields are absorbed by a dummy load
Dummy load
A dummy load is a device used to simulate an electrical load, usually for testing purposes.-Radio:In radio this device is also known as a dummy antenna or a radio frequency termination. It is a device used in place of an antenna to aid in testing a radio transmitter...
or cavity losses.