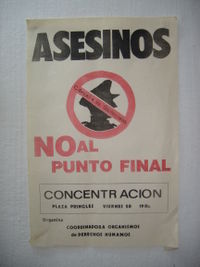 Ley de Punto Final was a law passed by the National Congress
Argentine National Congress
The Congress of the Argentine Nation is the legislative branch of the government of Argentina. Its composition is bicameral, constituted by a 72-seat Senate and a 257-seat Chamber of Deputies....
of Argentina
Argentina
Argentina , officially the Argentine Republic , is the second largest country in South America by land area, after Brazil. It is constituted as a federation of 23 provinces and an autonomous city, Buenos Aires...
after the end of the military dictatorship of the Proceso de Reorganización Nacional (which started with a coup d'état
Coup d'état
A coup d'état state, literally: strike/blow of state)—also known as a coup, putsch, and overthrow—is the sudden, extrajudicial deposition of a government, usually by a small group of the existing state establishment—typically the military—to replace the deposed government with another body; either...
in 1976 and ended in 1983). Formally, this law is referred to by number (Law No. 23492), like all others in Argentine legislation, but Ley de Punto Final is the only designation in common use, even in official speeches.
The law dictates the end of investigation and prosecution against people accused of political violence during the dictatorship, up to the restoration of democratic rule on 10 December 1983. It was passed on 24 December 1986, after only a 3-week debate. Its text is very short; it has seven articles. Article No. 5 excepts from the application of the law the cases of identity forgery and forced disappearance of minors.

The Ley de Punto Final was extremely controversial in its time and afterwards. It was proposed by the Radical
Radical Civic Union
The Radical Civic Union is a political party in Argentina. The party's positions on issues range from liberal to social democratic. The UCR is a member of the Socialist International. Founded in 1891 by radical liberals, it is the oldest political party active in Argentina...
administration of President Raúl Alfonsín
Raúl Alfonsín
Raúl Ricardo Alfonsín was an Argentine lawyer, politician and statesman, who served as the President of Argentina from December 10, 1983, to July 8, 1989. Alfonsín was the first democratically-elected president of Argentina following the military government known as the National Reorganization...
as a means to stop the escalation of trials against military and others, after the Trial of the Juntas
Juicio a las Juntas
The Trial of the Juntas was the judicial trial of the members of the de facto military government that ruled Argentina during the dictatorship of the Proceso de Reorganización Nacional, which lasted from 1976 to 1983...
had dealt with the top of the military hierarchies. Alfonsín himself was initially opposed to this law, but due to heavy military pressure (and under threat of a new coup d'etat), he accepted the legislation. In the Chamber of Deputies
Argentine Chamber of Deputies
The Chamber of Deputies is the lower house of the Argentine National Congress. This Chamber holds exclusive rights to create taxes, to draft troops, and to accuse the President, the ministers and the members of the Supreme Court before the Senate....
, 114 deputies voted for the law, 17 against, and 2 abstained; in the Senate
Argentine Senate
The Argentine Senate is the upper house of the Argentine National Congress. It has 72 senators: three for each province and three for the Autonomous City of Buenos Aires...
, 25 senators voted for, and 10 against.

This law had a complement in the Ley de Obediencia Debida
Ley de Obediencia Debida
Ley de Obediencia Debida was a law passed by the National Congress of Argentina after the end of the military dictatorship of the Proceso de Reorganización Nacional . Formally, this law is referred to by number Ley de Obediencia Debida (Spanish, Law of Due Obedience) was a law passed by the...
(Law of Due Obedience), which exempted subordinates from accusation when they were carrying out orders. These two laws were repealed by the National Congress in 2003, and then definitely voided as unconstitutional by the Supreme Court of Justice
Supreme Court of Argentina
The Supreme Court of Argentina is the highest court of law of the Argentine Republic. It was inaugurated on 15 January 1863. However, during much of the 20th century, the Court and, in general, the Argentine judicial system, has lacked autonomy from the executive power...
on 14 June 2005. This allowed for the re-opening of cases that involved crimes against humanity
Crime against humanity
Crimes against humanity, as defined by the Rome Statute of the International Criminal Court Explanatory Memorandum, "are particularly odious offenses in that they constitute a serious attack on human dignity or grave humiliation or a degradation of one or more human beings...
. The first of such cases, which involved the former Buenos Aires Provincial Police
Buenos Aires Provincial Police
The Buenos Aires Provincial Police is the police service responsible for policing the Province of Buenos Aires, in Argentina....
second-in-command Miguel Etchecolatz
Miguel Etchecolatz
Miguel Osvaldo Etchecolatz is a former senior Argentine police officer, who worked in the Buenos Aires Provincial Police during the first years of the military dictatorship. Etchecolatz was an active participant in the "anti-subversion operation" known as the National Reorganization Process...
, ended in September 2006 and laid down precedent by acknowledging that the dictatorship's state terrorism was a form of genocide
Genocide
Genocide is defined as "the deliberate and systematic destruction, in whole or in part, of an ethnic, racial, religious, or national group", though what constitutes enough of a "part" to qualify as genocide has been subject to much debate by legal scholars...
.