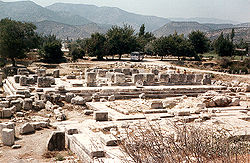 The Letoon trilingual is an inscription in three languages: standard Lycian
Lycian language
Lycian language refers to the inscriptional language of ancient Lycia, populated by Lycians, as well as its presumed spoken counterpart.-The speakers:...
or Lycian A, Greek
Ancient Greek
Ancient Greek is the stage of the Greek language in the periods spanning the times c. 9th–6th centuries BC, , c. 5th–4th centuries BC , and the c. 3rd century BC – 6th century AD of ancient Greece and the ancient world; being predated in the 2nd millennium BC by Mycenaean Greek...
and Aramaic covering the faces of a four-sided stone stele
Stele
A stele , also stela , is a stone or wooden slab, generally taller than it is wide, erected for funerals or commemorative purposes, most usually decorated with the names and titles of the deceased or living — inscribed, carved in relief , or painted onto the slab...
called the Letoon Trilingual Stele, discovered in 1973 during the archeological exploration of the Letoon
Letoon
The Letoon , sometimes Latinized as Letoum, was a sanctuary of Leto near the ancient city Xanthos that was one of the most important religious centres of the Lycian region in Anatolia...
temple complex, near Xanthos
Xanthos
Xanthos was the name of a city in ancient Lycia, the site of present day Kınık, Antalya Province, Turkey, and of the river on which the city is situated...
, ancient Lycia
Lycia
Lycia Lycian: Trm̃mis; ) was a region in Anatolia in what are now the provinces of Antalya and Muğla on the southern coast of Turkey. It was a federation of ancient cities in the region and later a province of the Roman Empire...
, in present-day Turkey
Turkey
Turkey , known officially as the Republic of Turkey , is a Eurasian country located in Western Asia and in East Thrace in Southeastern Europe...
. The inscription is a public record of a decree authorizing the establishment of a cult, with references to the deities, and provisions for officers in the new cult. The Lycian requires 41 lines; the Greek, 35 and the Aramaic, 27. They are not word-for-word translations, but each contains some information not present in the others. The Aramaic is somewhat condensed.

Although the use of the term "Letoon" with regard to the inscription and the stele is unequivocal, there is no standard name for either. Xanthos trilingual is sometimes used, which is to be distinguished from the Xanthos bilingual, meaning the Xanthos stele. However, sometimes Xanthos stele is used of the Letoon trilingual stele as well as for the tomb at Xanthos. Moreover, the term Xanthos trilingual (Lycian A, Lycian B, Greek) is sometimes used of the tomb at Xanthos. In the latter two cases only the context can provide clues as to which stele is meant.

The Lētōon was a temple complex about 4 kilometres (2 mi) south of Xanthus
Xanthos
Xanthos was the name of a city in ancient Lycia, the site of present day Kınık, Antalya Province, Turkey, and of the river on which the city is situated...
, capital of ancient Lycia
Lycia
Lycia Lycian: Trm̃mis; ) was a region in Anatolia in what are now the provinces of Antalya and Muğla on the southern coast of Turkey. It was a federation of ancient cities in the region and later a province of the Roman Empire...
. The complex dates to as early as the 7th century BC and must have been a center for the Lycian League. In it were three temples to Lētō
Leto
In Greek mythology, Leto is a daughter of the Titans Coeus and Phoebe. The island of Kos is claimed as her birthplace. In the Olympian scheme, Zeus is the father of her twins, Apollo and Artemis, the Letoides, which Leto conceived after her hidden beauty accidentally caught the eyes of Zeus...
, Artemis
Artemis
Artemis was one of the most widely venerated of the Ancient Greek deities. Her Roman equivalent is Diana. Some scholars believe that the name and indeed the goddess herself was originally pre-Greek. Homer refers to her as Artemis Agrotera, Potnia Theron: "Artemis of the wildland, Mistress of Animals"...
and Apollō
Apollo
Apollo is one of the most important and complex of the Olympian deities in Greek and Roman mythology...
. The stele was found near the temple of Apollo. It has been removed to the museum at Fethiye
Fethiye
Fethiye is a city and district of Muğla Province in the Aegean region of Turkey with about 68,000 inhabitants .-History:...
. The entire site is currently under several inches of water.

Date of the inscription

The first five lines of the Aramaic version mention that the inscription was made in the first year of the reign of the Persian king, Artaxerxes, but does not say which Artaxerxes:

In the month siwan, year 1 of King Artaxerxes. In the frontier of Arñna. Pixodarus son of Katomno, the satrap who is in Karka and Termmila.

If the king in question was Artaxerxes III Ochus, the date of the inscription is 358 BC. However, Pixodarus
Pixodarus of Caria
Pixodarus was a prince or king of Caria.-Biography:He was the youngest of the three sons of Hecatomnus, all of whom successively held the sovereignty of their native country...
was satrap
Satrap
Satrap was the name given to the governors of the provinces of the ancient Median and Achaemenid Empires and in several of their successors, such as the Sassanid Empire and the Hellenistic empires....
of Caria
Caria
Caria was a region of western Anatolia extending along the coast from mid-Ionia south to Lycia and east to Phrygia. The Ionian and Dorian Greeks colonized the west of it and joined the Carian population in forming Greek-dominated states there...
and Lycia
Lycia
Lycia Lycian: Trm̃mis; ) was a region in Anatolia in what are now the provinces of Antalya and Muğla on the southern coast of Turkey. It was a federation of ancient cities in the region and later a province of the Roman Empire...
no earlier than 341/340. Therefore the Persian king most likely was Arses
Arses of Persia
Artaxerxes IV Arses was king of Persia between 338 BC and 336 BC. He was the youngest son of King Artaxerxes III and Atossa and was not expected to succeed to the throne of Persia...
, son of Artaxerxes III, who took his father's name on coming to power. In that case the trilingual is dated to 337/336 BC.


Sample of the Lycian text