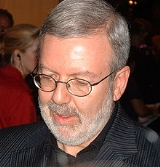 Overview
Leonard Maltin is an American film
Film
A film, also called a movie or motion picture, is a series of still or moving images. It is produced by recording photographic images with cameras, or by creating images using animation techniques or visual effects...
and animated film
Animation
Animation is the rapid display of a sequence of images of 2-D or 3-D artwork or model positions in order to create an illusion of movement. The effect is an optical illusion of motion due to the phenomenon of persistence of vision, and can be created and demonstrated in several ways...
critic
Film criticism
Film criticism is the analysis and evaluation of films, individually and collectively. In general, this can be divided into journalistic criticism that appears regularly in newspapers, and other popular, mass-media outlets and academic criticism by film scholars that is informed by film theory and...
and historian
Historian
A historian is a person who studies and writes about the past and is regarded as an authority on it. Historians are concerned with the continuous, methodical narrative and research of past events as relating to the human race; as well as the study of all history in time. If the individual is...
, author of several mainstream books on cinema, focusing on nostalgic, celebratory narratives.
Maltin was born in New York City, son of singer Jacqueline (née
Married and maiden names
A married name is the family name adopted by a person upon marriage. When a person assumes the family name of her spouse, the new name replaces the maiden name....
Gould), and Aaron Isaac Maltin, a lawyer and immigration judge. He is married to researcher and producer Alice Tlusty. He has one daughter Jessie, born in 1986, who works with him.

I recently watched To Have and Have Not, with bogie and bacall. Bogie was a fishing boat captain named Harry Morgan, but slim {bacall} keptalling him...
More
x