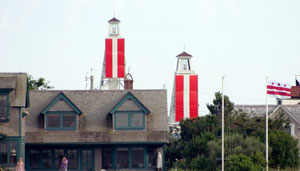 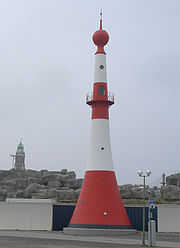 Leading lights are a pair of light beacons, used in navigation
Navigation
Navigation is the process of monitoring and controlling the movement of a craft or vehicle from one place to another. It is also the term of art used for the specialized knowledge used by navigators to perform navigation tasks...
to indicate a safe passage for vessels entering a shallow or dangerous channel; and may also be used for position fixing
Position fixing
Position fixing is the branch of navigation concerned with the use of a variety of visual and electronic methods to determine the position of a ship, aircraft or person on the surface of the Earth.These techniques include:...
. At night, the lights are a form of leading line
Leading line
A leading line, called a "range" in the United States, is a line formed by a pair of marks, which are generally man-made, that are used in position fixing and navigation, to indicate a safe passage through a shallow or dangerous channel...
that can be used for safe navigation. The beacons consist of two lights that are separated in distance and elevation, so that when they are aligned, with one above the other, they provide a bearing. Range lights are often illuminated day and night.

In some cases the two beacons are unlighted, in which case they are known as a Range in the United States or a Transit
Navigational transit
In navigation and position fixing, a transit occurs when a navigator observes two fixed reference points that are in line with the navigator. This creates a position line...
in the UK. The beacons may be artificial or natural.

Two lights are positioned near one another. One, called the front light, is lower than the one behind, which is called the rear light. At night when viewed from a ship, the two lights only become aligned vertically when a vessel is positioned on the correct bearing. If the vessel is on an incorrect course, the lights will not align.

During the day, the lights may not easily be seen and therefore leading lights are often fitted with secondary visual aids, e.g. large red flags with wide black lines running down them. When both red flags and black lines line up, the navigator knows that the vessel is on the correct bearing. The structures are usually painted to make them more prominent.

Some major rivers, such as the Elbe River
Elbe
The Elbe is one of the major rivers of Central Europe. It rises in the Krkonoše Mountains of the northwestern Czech Republic before traversing much of Bohemia , then Germany and flowing into the North Sea at Cuxhaven, 110 km northwest of Hamburg...
in Germany
Germany
Germany , officially the Federal Republic of Germany , is a federal parliamentary republic in Europe. The country consists of 16 states while the capital and largest city is Berlin. Germany covers an area of 357,021 km2 and has a largely temperate seasonal climate...
, have a series of leading lines. When it is necessary to make a turn, the navigator lines up the next pair of leading lights. This provides guidance from Hamburg
Hamburg
-History:The first historic name for the city was, according to Claudius Ptolemy's reports, Treva.But the city takes its modern name, Hamburg, from the first permanent building on the site, a castle whose construction was ordered by the Emperor Charlemagne in AD 808...
to the sea, using successive pairs of leading lights.

The first set of range lights in the United States
United States
The United States of America is a federal constitutional republic comprising fifty states and a federal district...
were privately established by subscription at Newburyport Harbor
Newburyport, Massachusetts
Newburyport is a small coastal city in Essex County, Massachusetts, United States, 35 miles northeast of Boston. The population was 21,189 at the 2000 census. A historic seaport with a vibrant tourism industry, Newburyport includes part of Plum Island...
in Massachusetts
Massachusetts
The Commonwealth of Massachusetts is a state in the New England region of the northeastern United States of America. It is bordered by Rhode Island and Connecticut to the south, New York to the west, and Vermont and New Hampshire to the north; at its east lies the Atlantic Ocean. As of the 2010...
in 1788. The technology was not used in Europe
Europe
Europe is, by convention, one of the world's seven continents. Comprising the westernmost peninsula of Eurasia, Europe is generally 'divided' from Asia to its east by the watershed divides of the Ural and Caucasus Mountains, the Ural River, the Caspian and Black Seas, and the waterways connecting...
until 1837, where the lights became known as leading lights.

Leading lights are sometimes designed to be movable, allowing their position to be shifted in the event of a change in the safe channel; these include one at Hilton Head, South Carolina
Hilton Head Range Rear Light
The Rear Lighthouse of Hilton Head Range Light Station, which is also called Leamington Lighthouse is an inactive light station on Hilton Head Island in Beaufort County, South Carolina.- Overview :...
, the original Chatham Light
Chatham Light
Chatham Lighthouse, known as Twin Lights prior to 1923, is a lighthouse in Chatham, Massachusetts, near the "elbow" of Cape Cod.The station was established in 1808, the second light on Cape Cod. To distinguish it from Highland Light, the first Cape Cod light, and to act as a range, twin octagonal...
, and the Nantucket Range Lights
Nantucket Range Lights
The Nantucket Range Lights formed a range established to guide vessels down the narrow channel into Nantucket Harbor. They were a predecessor to the current Nantucket Harbor Range Lights....
, predecessor to the Nantucket Harbor Range shown above.
The source of this article is wikipedia, the free encyclopedia.  The text of this article is licensed under the GFDL.