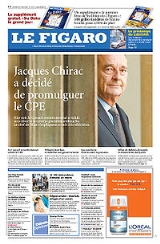 Le Figaro is owned by Groupe Le Figaro, whose publications include TV Magazine
TV Magazine
TV Magazine is a weekly French television listings magazine, published by Groupe Le Figaro.-Circulation:In 2006 TV Magazine had a circulation of 5,329,711, having suffered a small decline from 5,677,411 in 2002.-Other uses:...
and Evene. The company's chairman is Serge Dassault
Serge Dassault
Serge Dassault is a French entrepreneur and conservative politician. According to Forbes magazine, he was the 96th richest person in the world, with a net worth of $9.3 billion....
, whose Dassault Group
Dassault Group
Dassault Group, is a French group of companies led by Serge Dassault.Managing directors are Claude Dassault and Olivier Costa De Beauregard.- Subsidiaries :*Dassault Aviation;...
has controlled the paper since 2004.

The paper was founded as a satirical weekly in 1826, taking its name and motto
Motto
A motto is a phrase meant to formally summarize the general motivation or intention of a social group or organization. A motto may be in any language, but Latin is the most used. The local language is usual in the mottoes of governments...
from Le Mariage de Figaro, a play by Pierre-Augustin Caron de Beaumarchais. (The motto, "Sans la liberté de blâmer, il n'est point d'éloge flatteur" translates as "Without the freedom to criticise, there is no true praise".) It was published somewhat irregularly until 1854, when it was taken over by Hippolyte de Villemessant
Hippolyte de Villemessant
Jean Hippolyte Auguste Delaunay de Villemessant was a conservative French journalist.- Life :...
. By 1866 it had gained the greatest circulation of any newspaper in France; its first daily edition, that of 16 November 1866 sold 56,000 copies. Albert Wolff, Émile Zola
Émile Zola
Émile François Zola was a French writer, the most important exemplar of the literary school of naturalism and an important contributor to the development of theatrical naturalism...
, Alphonse Karr and Jules Claretie were among the paper's early contributors.

On 16 March 1914, Gaston Calmette
Gaston Calmette
Gaston Calmette was a French journalist.In January 1914 Calmette, who had been editor of the newspaper Le Figaro since 1902, launched a campaign against Minister of Finance Joseph Caillaux, who had introduced progressive taxation and was known for his pacifist stance towards Germany during the...
, the editor of Le Figaro, was assassinated by Henriette Caillaux
Henriette Caillaux
Henriette Caillaux was a Parisian socialite and second wife of the former Prime Minister of France. She is remembered as an assassin.-Biography:...
, the wife of Finance Minister Joseph Caillaux
Joseph Caillaux
Joseph-Marie–Auguste Caillaux was a major French politician of the Third Republic. The leader of the Radicals, he favored a policy of conciliation with Germany during his premiership from 1911 to 1912, which led to the maintenance of the peace during the Second Moroccan Crisis of 1911...
, after he published a letter that cast serious doubt on her husband's integrity.

In 1922, Le Figaro was purchased by perfume millionaire François Coty
François Coty
François Coty was a French perfume manufacturer, newspaper publisher, and founder of the fascist league Solidarité Française...
. In 1975, Le Figaro was bought by Robert Hersant
Robert Hersant
Robert Hersant was a French newspaper magnate with right-wing political views.- Biography :Hersant was born in Vertou, Loire-Atlantique....
's Socpresse
Socpresse
Socpresse was a French corporation which controlled the conservative daily newspaper Le Figaro, the weekly magazine L'Express, 40% of the weekly Le Journal du Dimanche, Valeurs Actuelles, and the football club FC Nantes. The company was acquired by the Dassault in September 2006...
. In 1999, the Carlyle Group
Carlyle Group
The Carlyle Group is an American-based global asset management firm, specializing in private equity, based in Washington, D.C. The Carlyle Group operates in four business areas: corporate private equity, real assets, market strategies and fund-of-funds, through its AlpInvest subsidiary...
obtained a 40% stake in the paper, which it later sold in March 2002. , Le Figaro is controlled by Serge Dassault
Serge Dassault
Serge Dassault is a French entrepreneur and conservative politician. According to Forbes magazine, he was the 96th richest person in the world, with a net worth of $9.3 billion....
, a conservative businessman and politician best known for running the aircraft manufacturer Dassault Aviation
Dassault Aviation
Dassault Aviation is a French aircraft manufacturer of military, regional and business jets, a subsidiary of Dassault Group.It was founded in 1930 by Marcel Bloch as Société des Avions Marcel Bloch or "MB". After World War II, Marcel Bloch changed his name to Marcel Dassault, and the name of the...
, which he inherited from his father, its founder, Marcel
Marcel Dassault
Marcel Dassault, born Marcel Bloch was a French aircraft industrialist.-Biography:Dassault was born in Paris. After graduating from the lycée Condorcet, Breguet School and Supaero, he invented a type of aircraft propeller used by the French army during World War I and founded the Société des...
(1892–1986).

Controversial both inside and outside the newspaper is its ownership by a person who also controls a major military supplier, as well as being a mayor
Mayor
In many countries, a Mayor is the highest ranking officer in the municipal government of a town or a large urban city....
and senator
French Senate
The Senate is the upper house of the Parliament of France, presided over by a president.The Senate enjoys less prominence than the lower house, the directly elected National Assembly; debates in the Senate tend to be less tense and generally enjoy less media coverage.-History:France's first...
from the ruling UMP
Union for a Popular Movement
The Union for a Popular Movement is a centre-right political party in France, and one of the two major contemporary political parties in the country along with the center-left Socialist Party...
party, and whose son Olivier Dassault
Olivier Dassault
Olivier Dassault is a French politician, currently serving as a deputy in the French National Assembly. He is also the son of Serge Dassault and grandchild of Marcel Dassault. He was elected 16 June 2002 as deputy for the first circonscription of Oise, running on the Union for a Popular Movement ...
is a member of the French National Assembly
French National Assembly
The French National Assembly is the lower house of the bicameral Parliament of France under the Fifth Republic. The upper house is the Senate ....
for the same party. In response, Dassault remarked in an interview on the public radio station France Inter
France Inter
France Inter is a major French public radio channel and part of Radio France. It is a "generalist" station, aiming to provide a wide national audience with a full service of news and intelligent spoken-word programming, both serious and entertaining, liberally punctuated with an eclectic mix of...
, that "newspapers must promulgate healthy ideas", and that "left-wing ideas are not healthy ideas."

In 2010, Lefigaro.fr created a section called Le Figaro in English, which provides the global English-speaking community with daily original or translated content from Le Figaro’s website.