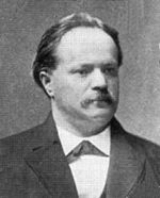 Encyclopedia
Lazarus Immanuel Fuchs was a German
German language
German is a West Germanic language, related to and classified alongside English and Dutch. With an estimated 90 – 98 million native speakers, German is one of the world's major languages and is the most widely-spoken first language in the European Union....
mathematician
Mathematician
A mathematician is a person whose primary area of study is the field of mathematics. Mathematicians are concerned with quantity, structure, space, and change....
who contributed important research in the field of linear differential equation
Linear differential equation
Linear differential equations are of the formwhere the differential operator L is a linear operator, y is the unknown function , and the right hand side ƒ is a given function of the same nature as y...
s. He was born in Mosina
Mosina
Mosina is a town in Poznań County, Greater Poland Voivodeship, Poland, about 20 km south Poznań, with 12,107 inhabitants .-External links:*...
(located in Grand Duchy of Poznań
Grand Duchy of Poznan
The Grand Duchy of Posen, or the Grand Duchy of Poznań was part of the Kingdom of Prussia, created from territories annexed by Prussia after the Partitions of Poland, and formally established following the Napoleonic Wars in 1815. Per agreements derived at the Congress of Vienna it was to have...
) and died in Berlin
Berlin
Berlin is the capital city of Germany and is one of the 16 states of Germany. With a population of 3.45 million people, Berlin is Germany's largest city. It is the second most populous city proper and the seventh most populous urban area in the European Union...
, Germany.

has at least one solution of the form