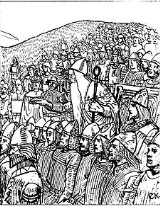 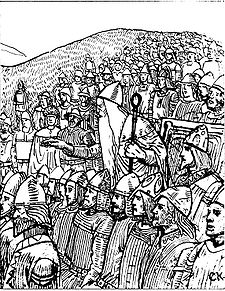 A lawspeaker is a unique Scandinavia
Scandinavia
Scandinavia is a cultural, historical and ethno-linguistic region in northern Europe that includes the three kingdoms of Denmark, Norway and Sweden, characterized by their common ethno-cultural heritage and language. Modern Norway and Sweden proper are situated on the Scandinavian Peninsula,...
n legal office. It has its basis in a common Germanic oral tradition
Oral tradition
Oral tradition and oral lore is cultural material and traditions transmitted orally from one generation to another. The messages or testimony are verbally transmitted in speech or song and may take the form, for example, of folktales, sayings, ballads, songs, or chants...
, where wise men were asked to recite the law, but it was only in Scandinavia that the function evolved into an office. Two of the most famous lawspeakers are Snorri Sturluson
Snorri Sturluson
Snorri Sturluson was an Icelandic historian, poet, and politician. He was twice elected lawspeaker at the Icelandic parliament, the Althing...
and Þorgnýr the Lawspeaker
Þorgnýr the Lawspeaker
Þorgnýr the Lawspeaker is the name of one of at least three generations of lawspeakers by the name Þorgnýr, who appear in the Heimskringla by the Icelandic scholar and chieftain Snorri Sturluson, and in the less known Styrbjarnar þáttr Svíakappa and Hróa þáttr heimska...
.

According to the Westrogothic law, the lawspeaker was appointed for life by the yeomen of the province. The office was not hereditary, but he was usually selected from the more powerful families.

From the mid-13th century and onwards, the lawspeakers became more attached to the king, and it was common that lawspeakers were members of the king's council. King Magnus Eriksson
Magnus IV of Sweden
Magnus Eriksson as Magnus IV was king of Sweden , including Finland, as Magnus VII King of Norway , including Iceland and Greenland, and also ruled Scania . He has also vindictively been called Magnus Smek...
decided that the king would influence the appointment of the lawspeakers. Six nobles and six yeomen would in consultation with two clergymen appoint three men from the jurisdiction among whom the king would select the one he deemed to be most fit. This procedure would be in effect until the 16th century when the whole process of selection was transferred to the king.

From then on, the lawspeakers only came from the nobility, and it had turned into a pension, in which a member of the Privy Council of Sweden
Privy Council of Sweden
The High Council of Sweden or Council of the Realm consisted originally of those men of noble, common and clergical background, that the king saw fit for advisory service...
was selected and received a salary, but had other people taking care of the work. This privilege was abolished during the Reduction of 1680
Reduction (Sweden)
In the reductions in Sweden, fiefs that had been granted to the Swedish nobility were returned to the Crown.The first reduction under Charles X Gustav of Sweden in 1655 restored a quarter of "donations" made after 1632. In the Great Reduction of 1680 under Charles XI of Sweden the Crown...
, after which the lawspeakers were obliged to take care of the work themselves, and there were checks on the appointment of members of the privy council. Still, the appointment remained restricted to noblemen until 1723.

By then, the functions of the office had become restricted to that of a judge, a function which also became less important by time. In 1849, the office was abolished, but the title remained occasionally in use as a title of honour for governors.

Finland being governed by Swedish law wholly until 1809, the events were the same as in Sweden. However, the laamanni offices were terminated and the term laamanni became a honorific title only in 1868. In the 1993 reform, laamanni was reintroduced as the title of the president of a court of law. The exceptions are the Supreme Court and Supreme Administrative Court, which have presidenttis.

In Norway
Norway
Norway , officially the Kingdom of Norway, is a Nordic unitary constitutional monarchy whose territory comprises the western portion of the Scandinavian Peninsula, Jan Mayen, and the Arctic archipelago of Svalbard and Bouvet Island. Norway has a total area of and a population of about 4.9 million...
, the lawspeakers remained counselors versed in the law until king Sverre I of Norway (1184–1202) made them into his officials. In the laws of Magnus VI of Norway
Magnus VI of Norway
Magnus VI Lagabøte or Magnus Håkonsson , was king of Norway from 1263 until 1280.-Early life:...
(1263–80), they were given the right to function as judges and to preside at the lagting
Lagting
Lagting, literally "Law Ting", can refer to:*Lagting, the Parliament of Åland*Lagting, the former quasi-upper house of the parliament of Norway *Løgting, the parliament of the Faroe Islands...
s (the Norwegian superior courts). The lagtings and the office of lawspeaker were abolished in 1797, but it was reinstituted in 1890 together with the introduction of the jury
Jury
A jury is a sworn body of people convened to render an impartial verdict officially submitted to them by a court, or to set a penalty or judgment. Modern juries tend to be found in courts to ascertain the guilt, or lack thereof, in a crime. In Anglophone jurisdictions, the verdict may be guilty,...
system.

In Iceland
Iceland
Iceland , described as the Republic of Iceland, is a Nordic and European island country in the North Atlantic Ocean, on the Mid-Atlantic Ridge. Iceland also refers to the main island of the country, which contains almost all the population and almost all the land area. The country has a population...
, the office was introduced in 930, when the Alþing was established. He was elected for three years. Besides his function as the president of the thing, his duties were restricted to counselling and to reciting the law. It was the sole government office of the mediaeval Icelandic Commonwealth
Icelandic Commonwealth
The Icelandic Commonwealth, Icelandic Free State, or Republic of Iceland was the state existing in Iceland between the establishment of the Althing in 930 and the pledge of fealty to the Norwegian king in 1262...
. The lawspeaker was elected for a term of three years and was supposed to declaim the law at Alþingi
Althing
The Alþingi, anglicised variously as Althing or Althingi, is the national parliament of Iceland. The Althingi is the oldest parliamentary institution in the world still extant...
, a third of it each summer. In fact, Grímr Svertingsson's term was cut short, not because of incompetence or illness, but because his voice was too weak for the job. Apart from his function as a lawsayer and chairman of the court, the lögsögumaðr had no formal power, but he would often be appointed as an arbitrator in the frequently arising disputes. The office lingered on for a few years in the transitional period after 1262, after which it was replaced with a lögmaðr. The traditional date for the founding of Alþingi is 930 with Úlfljótr
Úlfljótr
Úlfljótr brought law to Iceland and is regarded by some as Iceland's first lawspeaker. In around 927-930 AD Úlfljótr was sent to Norway by a group of chieftans to study law and cuture and bring back to Iceland sufficient understanding to help establish Iceland's legal framework and form of...
appearing as a founding figure and the original author of the laws. After the union with Norway
Norway
Norway , officially the Kingdom of Norway, is a Nordic unitary constitutional monarchy whose territory comprises the western portion of the Scandinavian Peninsula, Jan Mayen, and the Arctic archipelago of Svalbard and Bouvet Island. Norway has a total area of and a population of about 4.9 million...
in 1264, two royal lawspeakers were appointed who had an important influence on the legal processes at the thing. The office was abolished together with the Alþing in 1800.

Scholars are suspicious of the fact that Úlfljótur's first two successors have been assigned a period in office of exactly 20 summers each, but from Þorkell máni on, the chronology is probably correct; names are given in their modern Icelandic
Icelandic language
Icelandic is a North Germanic language, the main language of Iceland. Its closest relative is Faroese.Icelandic is an Indo-European language belonging to the North Germanic or Nordic branch of the Germanic languages. Historically, it was the westernmost of the Indo-European languages prior to the...
form.