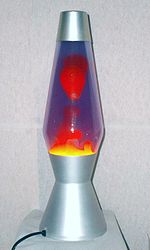 The lamp contains a standard incandescent bulb or halogen lamp
Halogen lamp
A halogen lamp, also known as a tungsten halogen lamp, is an incandescent lamp with a tungsten filament contained within an inert gas and a small amount of a halogen such as iodine or bromine. The chemical halogen cycle redeposits evaporated tungsten back on to the filament, extending the life of...
which heats a tall (often tapered) glass bottle containing water and a transparent, translucent or opaque mix of mineral oil, paraffin wax and carbon tetrachloride
Carbon tetrachloride
Carbon tetrachloride, also known by many other names is the organic compound with the formula CCl4. It was formerly widely used in fire extinguishers, as a precursor to refrigerants, and as a cleaning agent...
. The water and/or mineral oil can be colored with dye
Dye
A dye is a colored substance that has an affinity to the substrate to which it is being applied. The dye is generally applied in an aqueous solution, and requires a mordant to improve the fastness of the dye on the fiber....
s. The density of common wax is much lower than that of water and would float on top under any temperature. However, the carbon tetrachloride is heavier than water (also nonflammable and miscible with wax), and is added to the wax to make its density at room temperature slightly higher than that of the water. When heated, the wax mixture becomes less dense than the water because wax expands more than water when both are heated. It also becomes fluid, and blobs of wax ascend to the top of the device where they cool (which increases their density relative to that of the water's) and then descend. A metallic wire coil in the base of the bottle acts as a surface tension
Surface tension
Surface tension is a property of the surface of a liquid that allows it to resist an external force. It is revealed, for example, in floating of some objects on the surface of water, even though they are denser than water, and in the ability of some insects to run on the water surface...
breaker to recombine the cooled blobs of wax after they descend.

The underlying mechanism is a form of Rayleigh–Taylor instability.

The bulb is normally 25 to 40 watts. It may take 45 to 60 minutes for the wax to warm up enough to freely form rising blobs (depending on the original temperature). It may take 2 to 3 hours if it has been in a cold room for a long time.

Once the wax is molten the lamp should not be shaken or knocked over or the two fluids may emulsify
Emulsion
An emulsion is a mixture of two or more liquids that are normally immiscible . Emulsions are part of a more general class of two-phase systems of matter called colloids. Although the terms colloid and emulsion are sometimes used interchangeably, emulsion is used when both the dispersed and the...
and the wax/blobs will remain cloudy rather than clear. Some recombination will occur as part of the normal cycle of the lava in the container but the only means to recombine all of wax is to turn off the lamp and wait a few hours. The wax will settle back down at the bottom, forming one blob once again. Severe cases can require many heat-cool cycles to clear.

Briton Edward Craven-Walker invented the lava lamp in 1960. His for "Display Device" was filed in 1965 and issued in 1968.
Craven-Walker's company was named Crestworth and was based in Poole
Poole
Poole is a large coastal town and seaport in the county of Dorset, on the south coast of England. The town is east of Dorchester, and Bournemouth adjoins Poole to the east. The Borough of Poole was made a unitary authority in 1997, gaining administrative independence from Dorset County Council...
, Dorset
Dorset
Dorset , is a county in South West England on the English Channel coast. The county town is Dorchester which is situated in the south. The Hampshire towns of Bournemouth and Christchurch joined the county with the reorganisation of local government in 1974...
, in the United Kingdom
United Kingdom
The United Kingdom of Great Britain and Northern IrelandIn the United Kingdom and Dependencies, other languages have been officially recognised as legitimate autochthonous languages under the European Charter for Regional or Minority Languages...
. Craven-Walker named the lamp Astro and had variations such as the Astro Mini and the Astro Coach lantern. Craven-Walker presented it at a Brussels
Brussels
Brussels , officially the Brussels Region or Brussels-Capital Region , is the capital of Belgium and the de facto capital of the European Union...
trade show in 1965, where the entrepreneur Adolph Wertheimer noticed it. Wertheimer and his business partner William M. Rubinstein bought the U.S.
United States
The United States of America is a federal constitutional republic comprising fifty states and a federal district...
rights to manufacture and sell it as the Lava Lite via Lava Corporation or Lava Manufacturing Corporation. Wertheimer sold his shares to Hy Spector who took the product into production, manufacturing and marketing the Lava Lite in his Chicago
Chicago
Chicago is the largest city in the US state of Illinois. With nearly 2.7 million residents, it is the most populous city in the Midwestern United States and the third most populous in the US, after New York City and Los Angeles...
factory at 1650 W. Irving Park Rd in the mid-60s. Rubinstein stayed on as a vice president. The lamps were a success throughout the 1960s and early 70s. Lava Corporation's name changed to Lava-Simplex-Scribe International in the early 1970s, and made instant-loading camera-film cartridges, as well as postage-stamp vending machines.

In the late seventies Spector sold Lava Simplex International to Micheal Eddie and Lawrence Haggerty of Haggerty Enterprises. Haggerty Enterprises continues to produce and sell the Lava Lamp in the US, using the name of Lavaglass. "Lava lamp" has been used as a generic term but Lavaworld has claimed violation of trademarks.

In the 1990s, Craven-Walker, who had retained the rights for the rest of the world, took on a business partner Cressida Granger
Cressida Granger (entrepreneur)
Cressida Granger is a British entrepreneur. She is the owner and managing director of Mathmos, the lighting company founded by Edward Craven Walker, inventor of the lava lamp.-Career:...
. They changed the company name to Mathmos
Mathmos
Mathmos is a British company that sells lighting products, most famously the lava lamp invented by its founder Edward Craven Walker. It is headquartered in its factory in Poole, Dorset.-Company History:...
in 1992. Mathmos continues to make Lava Lamps and related products. Mathmos lamps are still made in the original factory in Poole
Poole
Poole is a large coastal town and seaport in the county of Dorset, on the south coast of England. The town is east of Dorchester, and Bournemouth adjoins Poole to the east. The Borough of Poole was made a unitary authority in 1997, gaining administrative independence from Dorset County Council...
.

In 2004, Phillip Quinn, a 24-year-old of Kent, Washington
Kent, Washington
Kent is a city located in King County, Washington, United States, and is the third largest city in King County and the sixth largest in the state. An outlying suburb of Seattle, Kent is also the corporate home for companies such as REI and Oberto Sausage...
, was killed during an attempt to heat up a lava lamp on his kitchen stove while closely observing it from only a few feet away. The heat from the stove built up pressure in the lamp until it exploded, spraying shards of glass with enough force to pierce his chest, with one shard piercing his heart and causing fatal injuries. The circumstances of his death were later repeated and confirmed in a 2006 episode of the popular science television series MythBusters
MythBusters
MythBusters is a science entertainment TV program created and produced by Beyond Television Productions for the Discovery Channel. The series is screened by numerous international broadcasters, including Discovery Channel Australia, Discovery Channel Latin America, Discovery Channel Canada, Quest...
. The show also proved that even if shards of glass are not thrown with lethal velocity
Velocity
In physics, velocity is speed in a given direction. Speed describes only how fast an object is moving, whereas velocity gives both the speed and direction of the object's motion. To have a constant velocity, an object must have a constant speed and motion in a constant direction. Constant ...
during such an attempt, the resulting spray of hot liquid from the lamp could easily cause severe burns to anyone nearby. The show also noted that the safety instructions clearly state that lava lamps should not be heated by any source other than the specifically rated bulbs and purpose-designed bases that are provided.
Homebrew lava lamp recipes can be found over internet, however some of them rely on combinations of highly flammable components like alcohol. Such lamps could represent a serious fire hazard in the case of rupture when heated over a light bulb.