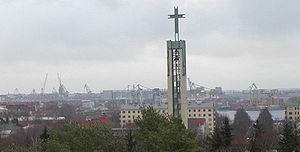 Lauttasaari is an island and neighbourhood of Western Helsinki
Helsinki
Helsinki is the capital and largest city in Finland. It is in the region of Uusimaa, located in southern Finland, on the shore of the Gulf of Finland, an arm of the Baltic Sea. The population of the city of Helsinki is , making it by far the most populous municipality in Finland. Helsinki is...
(Helsingfors in Swedish), about 3 kilometres west of the city centre.

With a population of 19000, Lauttasaari is primarily a residential area but also contains services, including several marinas and canoe clubs. Although close to the city centre, Lauttasaari is noted for its preserved forest areas and rocky outcrops. 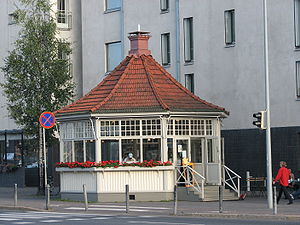 The highway Länsiväylä
Länsiväylä
is a motorway in the Greater Helsinki area of Finland, mainly at the Helsinki conurbation. It is part of the Finnish national road 51. The road begins in Ruoholahti in western Helsinki and continues west through the island of Lauttasaari and then across the city border to Espoo. The Länsiväylä road...
(Västerleden in Swedish, literally Western Route) linking central Helsinki with Espoo
Espoo
Espoo is the second largest city and municipality in Finland. The population of the city of Espoo is . It is part of the Helsinki Metropolitan Area along with the cities of Helsinki, Vantaa, and Kauniainen. Espoo shares its eastern border with Helsinki and Vantaa, while enclosing Kauniainen....
, passes through Lauttasaari.

The name Lauttasaari literally means "ferry island" although the island is now connected to Helsinki and Espoo
Espoo
Espoo is the second largest city and municipality in Finland. The population of the city of Espoo is . It is part of the Helsinki Metropolitan Area along with the cities of Helsinki, Vantaa, and Kauniainen. Espoo shares its eastern border with Helsinki and Vantaa, while enclosing Kauniainen....
by bridges and causeways. 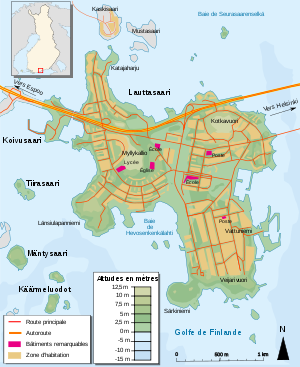 Vattuniemi is a section of Lauttasaari on the southern end of the island. The area was built up in the 1950s as an industrial zone. Since 2000, there has been a significant change in the markup of the area, and several office and industrial facilities have been demolished, with apartments being built to replace them. Currently, the median price of residential property is relatively high, causing the residential makeup to consist of the young and affluent. The main street on the western side of the area is Särkiniementie, and the eastern main street is Vattuniemenkatu.

Katajaharju is a section of Lauttasaari in the north-western side of the island. The entire area is on the north side of Länsiväylä highway, and is primarily private residential houses. The area is or has been the home of several notable Finns, including the national entertainer Spede Pasanen
Spede Pasanen
Pertti Olavi "Spede" Pasanen was a Finnish film director and producer, comedian, humorist, inventor, TV personality and practitioner of gags....
, the Finnish Rally Driver Markku Alen
Markku Alén
Markku Allan Alén is a Finnish former rally and race car driver. He drove for Fiat, Lancia, Subaru and Toyota in the World Rally Championship, and held the record for most stage wins in the series until 2011...
and formerly, the great Finnish hockey legend, Teemu Selänne
Teemu Selänne
Teemu Ilmari Selänne nicknamed "The Finnish Flash" is a Finnish professional ice hockey winger, an alternate captain of the Anaheim Ducks of the National Hockey League . An offensive player known for his skill and speed, Selanne has led the NHL in goal-scoring three times and has been named to...
.

The Lauttasaari church, the Myllykallio school, and the old Management Studies Institute building are amongst the examples of 1950s construction for public spaces on the island. The church was inaugurated on October 20, 1958, and was designed by professor Keijo Petäjä, who himself was a resident of Lauttasaari. The church steeple was placed into service in the autumn of 1957.