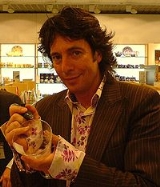 Encyclopedia
Laurence Llewelyn-Bowen (born 11 March 1965) is a successful homestyle consultant best known for his appearances on the BBC television program
Television program
A television program , also called television show, is a segment of content which is intended to be broadcast on television. It may be a one-time production or part of a periodically recurring series...
me Changing Rooms. He is noted for his flamboyant personality and dandy
Dandy
A dandy is a man who places particular importance upon physical appearance, refined language, and leisurely hobbies, pursued with the appearance of nonchalance in a cult of Self...
ish appearance.

He is sometimes credited as "Laurence Llewelyn Bowen", and the components of his name are frequently misspelled "Llewellyn" and/or "Lawrence".

Laurence R. Bowen was born in 1965 in Kensington, London, to parents Trefor and Patricia Bowen (née Wilks). His father, a Harley Street
Harley Street
Harley Street is a street in the City of Westminster in London, England which has been noted since the 19th century for its large number of private specialists in medicine and surgery.- Overview :...
orthopaedic surgeon, died of leukaemia in 1974, aged 42, when Laurence was just nine years of age. His mother, a teacher
Teacher
A teacher or schoolteacher is a person who provides education for pupils and students . The role of teacher is often formal and ongoing, carried out at a school or other place of formal education. In many countries, a person who wishes to become a teacher must first obtain specified professional...
, died in 2002. He has a brother called Edward and a sister called Frances. He is of Welsh
Welsh people
The Welsh people are an ethnic group and nation associated with Wales and the Welsh language.John Davies argues that the origin of the "Welsh nation" can be traced to the late 4th and early 5th centuries, following the Roman departure from Britain, although Brythonic Celtic languages seem to have...
descent.

Bowen was educated at Alleyn's School
Alleyn's School
Alleyn's School is an independent, fee-paying co-educational day school situated in Dulwich, south London, England. It is a registered charity and was originally part of the historic Alleyn's College of God's Gift charitable foundation, which also included James Allen's Girls' School , Dulwich...
in Dulwich before graduating from the Camberwell School of Arts and Crafts (now a constituent college of the University of the Arts London
University of the Arts London
The University of the Arts London, formerly known as the London Institute, is a collegiate university comprising six internationally recognised art, design, fashion and media colleges in London, England...
) in 1986 with a Fine Art
Fine art
Fine art or the fine arts encompass art forms developed primarily for aesthetics and/or concept rather than practical application. Art is often a synonym for fine art, as employed in the term "art gallery"....
degree
Academic degree
An academic degree is a position and title within a college or university that is usually awarded in recognition of the recipient having either satisfactorily completed a prescribed course of study or having conducted a scholarly endeavour deemed worthy of his or her admission to the degree...
.

After graduating, Llewelyn-Bowen worked for the Harefield Group of Companies and the interior design firm Peter Leonard Associates. In 1989 he started his own design consultancy.

His wife Jackie (born in 1964), an author, had heard through her agent that a production company was searching for a designer and in 1996 he appeared on the first episode of Changing Rooms.

In 2004 Llewelyn-Bowen designed the interior of the Inc Bar in Greenwich, England in a former 1830s music hall. The design features Larry's Bar, named after Llewelyn-Bowen and "the Divan", a dimly lit nook, a sort of make-out room.

He has also presented a three-part BBC special Taste (2002), about the history of interior design, and in autumn 2005 he began presenting the weekly BBC1 travel show Holiday 2006. His books include Fantasy Rooms: Inspirational Designs from the BBC Series (1999), Display (2001), "Home Front": Inside Out (2002), Design Rules (2003) and A Pinch of Posh (2006) co-written with his wife, Jackie. He has also made a guest appearance on Changing Rooms American counterpart, Trading Spaces
Trading Spaces
Trading Spaces is an hour-long American television reality program that aired from 2000 to 2008 on the cable channels TLC and Discovery Home. The format of the show was based on the BBC TV series Changing Rooms. The show ran for eight seasons....
.

In March 2005 he starred in a one-off mockumentary
Mockumentary
A mockumentary , is a type of film or television show in which fictitious events are presented in documentary format. These productions are often used to analyze or comment on current events and issues by using a fictitious setting, or to parody the documentary form itself...
as a prospective candidate for Parliament. His party, the Purple Party, "lobbied
Lobbying
Lobbying is the act of attempting to influence decisions made by officials in the government, most often legislators or members of regulatory agencies. Lobbying is done by various people or groups, from private-sector individuals or corporations, fellow legislators or government officials, or...
" for a restoration of Britain's heritage
Cultural heritage
Cultural heritage is the legacy of physical artifacts and intangible attributes of a group or society that are inherited from past generations, maintained in the present and bestowed for the benefit of future generations...
, and several extreme architectural
Architecture
Architecture is both the process and product of planning, designing and construction. Architectural works, in the material form of buildings, are often perceived as cultural and political symbols and as works of art...
measures such as tearing down all buildings that did not conform to their surroundings.


Who Wants to Be a Millionaire? controversy 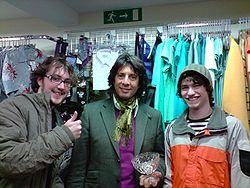 In November 2007 he and his family were featured in the Living TV series To The Manor Bowen. The designer created a line of wallpaper in collaboration with the British Home Decor Company Graham & Brown. In December of that year he and his family took part in the ITV1
ITV1
ITV1 is a generic brand that is used by twelve franchises of the British ITV Network in the English regions, Wales, southern Scotland , the Isle of Man and the Bailiwicks of Jersey and Guernsey. The ITV1 brand was introduced by Carlton and Granada in 2001, alongside the regional identities of their...
game show All Star Family Fortunes.

In 2008 he began hosting a show "The Sunday Spa" on Classic FM
Classic FM (UK)
Classic FM, one of the United Kingdom's three Independent National Radio stations, broadcasts classical music in a popular and accessible style.-Overview:...
.

A study of Laurence's family tree featured in the BBCs 'Who Do You Think You Are?' programme first aired on 29 September 2008. It showed that Llewelyn-Bowen's mother's family had a seafaring history.

On 13 April 2009 he presented a documentary on BBC One in the West region in which he went "In Search of England's Green & Pleasant Land". http://news.bbc.co.uk/local/bristol/hi/people_and_places/newsid_7992000/7992524.stm The programme explored the threats to the rural way of life from urban creep and the loss of local services.

In 2009, Laurence also released two ranges of papercrafting products in conjunction with Trimcraft. The ranges were called Retro Rose and Venaissence. http://rubberstamping.about.com/od/supplies/p/LaurenceLlewelynBowen.htm

Laurence appeared on the 2010 series of the ITV1 reality show 'Popstar to Operastar
Popstar to Operastar
Popstar to Operastar is a British television programme singing competition based around the training of pop stars of current to be able to sing opera. The show began airing on ITV on 15 January 2010 at 9pm. The show is repeated on TV3 Ireland on Saturday evening. The programme is produced by...
' as a critic along side Meat Loaf
Meat Loaf
Michael Lee Aday , better known by his stage name, Meat Loaf, is an American hard rock musician and actor...
, and classically trained mentors Katherine Jenkins
Katherine Jenkins
Katherine Jenkins is a Welsh mezzo-soprano. She is a classical-popular crossover singer who performs across a spectrum of operatic arias, popular songs, musical theatre and hymns.-Early life and education:...
and Rolando Villazon
Rolando Villazón
Emilio Rolando Villazón Mauleón is a Mexican tenor. He settled in France and in 2007 became a French citizen.-Early life and education:...
.

Since 2010, Laurence has presented the daytime ITV1 show Auction Party.

Until 2004 Llewelyn-Bowen lived in Kidbrooke
Kidbrooke
Kidbrooke is a district of South East London, England, located in the London Borough of Greenwich.The district takes its name from the Kyd Brook, a watercourse which runs from Orpington to Lewisham, by which point it is part of the River Quaggy...
, South East London. With his wife Jackie and their two daughters, Cecile (born 1995) and Hermione (born 1998), he moved to a 17th century, grade-II listed manor house in Gloucestershire in April 2007.
He and his wife are ambassadors to the aid agency CARE International UK and in February 2008 visited the cyclone-hit areas of Bangladesh. They are also active patrons for children's cancer charity CLIC Sargent
CLIC Sargent
CLIC Sargent is charity in the United Kingdom that was formed by the merger of Sargent Cancer Care for Children and Cancer and Leukaemia in Childhood in 2005. The charity specializes in providing support for children with cancer....
and Shooting Star Children's Hospice
Shooting Star Children's Hospice
The Shooting Star Children's Hospice is a UK-based children's charity.The charity provides care, support and advice for children and young people with life-limiting conditions and their families...

Laurence is also a patron of the children's charity MERU, co-founded by his father Trefor Llewlyn-Bowen with Bill Bond in 1970.

He has recently acquired a home in Port Isaac
Port Isaac
Port Isaac is a small and picturesque fishing village on the Atlantic Coast of North Cornwall, United Kingdom. The nearest towns are Wadebridge and Camelford, both ten miles away in opposite directions. Port Gaverne, commonly mistaken to be part of Port Isaac, is a hamlet that has its own...
, Cornwall
Cornwall
Cornwall is a unitary authority and ceremonial county of England, within the United Kingdom. It is bordered to the north and west by the Celtic Sea, to the south by the English Channel, and to the east by the county of Devon, over the River Tamar. Cornwall has a population of , and covers an area of...
, which is well-known as the filming location of the TV series Doc Martin
Doc Martin
Doc Martin is a British television comedy drama series starring Martin Clunes in the title role. It was created by Mark Crowdy, Craig Ferguson and Dominic Minghella. The show is filmed on location in the fishing village of Port Isaac, Cornwall, United Kingdom, with filming of most interior scenes...
.


Other appearances within pop-culture