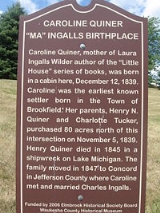 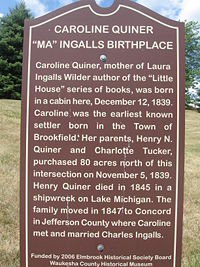 For information on the relatives, see : List of real-life individuals from Little House on the Prairie

She was born 15 miles west of Milwaukee, Wisconsin
Milwaukee, Wisconsin
Milwaukee is the largest city in the U.S. state of Wisconsin, the 28th most populous city in the United States and 39th most populous region in the United States. It is the county seat of Milwaukee County and is located on the southwestern shore of Lake Michigan. According to 2010 census data, the...
, in the town of Brookfield
Brookfield (town), Wisconsin
Brookfield is a town in Waukesha County, Wisconsin, United States. The population was 6,390 at the 2000 census. The unincorporated community of Goerke's Corner is located in the town.-Religion:...
, in the county of Waukesha, the fifth of seven children of Henry Quiner and Charlotte (Tucker) Quiner. Her brothers were Joseph, Henry, and Thomas, and her sisters were Martha Jane and Eliza (the Quiners' first child, Martha Morse Quiner, died in 1836).

When Caroline was five, her father died in an accident, reportedly on Lake Michigan
Lake Michigan
Lake Michigan is one of the five Great Lakes of North America and the only one located entirely within the United States. It is the second largest of the Great Lakes by volume and the third largest by surface area, after Lake Superior and Lake Huron...
near the Straits of Mackinac
Straits of Mackinac
The Straits of Mackinac is the strip of water that connects two of the Great Lakes, Lake Michigan and Lake Huron, and separates the Lower Peninsula of Michigan from the Upper Peninsula of Michigan. It is a shipping lane providing passage for raw materials and finished goods, connecting, for...
. In 1849, her mother married Frederick Holbrook, a farmer who lived nearby. They had one child together, Charlotte "Lottie" Holbrook. Caroline evidently loved and respected her stepfather, and would later honor his memory by naming her son after him.

At the age of sixteen and a half, Caroline started working as a teacher. On February 1, 1860 she married Charles Ingalls
Charles Ingalls
Charles Phillip Ingalls was the father of Laura Ingalls Wilder, known for her Little House on the Prairie series of books...
. They had five children: Mary, Laura, Caroline ("Carrie")
Carrie Ingalls
Caroline Celestia "Carrie" Ingalls Swanzey was the third child of Charles and Caroline Ingalls, and was born in Montgomery County, Kansas...
, Charles Frederick ("Freddie"), and Grace.

Freddie died at the age of 9 months. He was born November 1, 1875 in Walnut Grove, Minnesota
Walnut Grove, Minnesota
As of the census of 2000, there were 599 people, 291 households, and 178 families residing in the city. The population density was 577.7 people per square mile . There were 341 housing units at an average density of 328.9 per square mile...
, and died August 27, 1876 in South Troy, Minnesota
South Troy, Minnesota
South Troy is a small unincorporated community on U.S. Route 63 in Zumbro Township, Wabasha County, Minnesota, United States, west of the city of Hammond.-Notable people:...
, of undetermined causes. In her unpublished autobiography Pioneer Girl, Laura remembers that "Little Brother was not well" and that "one terrible day, he straightened out his little body and was dead". Wilder scholar William Anderson noted, "Nearly forty years after Freddie’s death, Ma mourned him, telling relatives how different everything would be 'if Freddie had lived'." Laura Ingalls Wilder never mentioned him in her books, but he appears in Old Town in the Green Groves
Old Town in the Green Groves
Old Town in the Green Groves novel by Cynthia Rylant is a fictional midquel book based on some notes left by Laura Ingalls Wilder and a general knowledge about her life and the times....
, a Laura's Lost Years novel by Cynthia Rylant
Cynthia Rylant
Cynthia Rylant is an American author. She has written more than 100 children's books in English and Spanish. With the divorce of her parents when she was four and living without running water and electricity she became an author including works of fiction, nonfiction, and poetry...
. The history of Freddie is also mentioned in The Lord Is My Shepherd, Part 1 episode of the Little House on the Prairie
Little House on the Prairie (TV series)
Little House on the Prairie is an American Western drama television series, starring Michael Landon and Melissa Gilbert, about a family living on a farm in Walnut Grove, Minnesota, in the 1870s and 1880s. The show was an adaptation of Laura Ingalls Wilder's best-selling series of Little House books...
series. Certain circumstances and consequences of his death (appearing in the part 2 of the episode) were, however, fictionalized, including his death when he was only a few weeks old.

Laura Ingalls Wilder's only son also died. It is not known exactly how old he was, but he was supposedly a few weeks old, sick, and was never even named. He died of unspecified causes and Laura did not have any more children after his death. He is not buried with his parents Laura and Almanzo in Mansfield, Missouri. Instead "baby son of A.J. Wilder" is buried with his maternal grandparents and aunts in the De Smet, South Dakota cemetery.

Laura's only surviving child, daughter Rose Wilder Lane
Rose Wilder Lane
Rose Wilder Lane was an American journalist, travel writer, novelist, and political theorist...
, like her mother and grandmother, also had a son who died shortly after birth or who was still born around 1910. Like her mother Laura, Rose never had any more children after his tragic death. Supposedly, the end of the pregnancy required Rose to have an operation which left her unable to have children. She eventually divorced her husband, Gillette Lane around 1915 or 1916 and does not appear to have dated men after her divorce. Although she was a prolific writer, Rose never wrote about what exactly happened to her son or when he was born. The death was so painful, as was Freddie Ingalls' and Baby Son Wilder's deaths, that Rose did not want to speak about the loss. Decades later she would only write a friend and say that she never forgot it.

The Ingalls family traveled by covered wagon from Wisconsin
Wisconsin
Wisconsin is a U.S. state located in the north-central United States and is part of the Midwest. It is bordered by Minnesota to the west, Iowa to the southwest, Illinois to the south, Lake Michigan to the east, Michigan to the northeast, and Lake Superior to the north. Wisconsin's capital is...
, Kansas
Kansas
Kansas is a US state located in the Midwestern United States. It is named after the Kansas River which flows through it, which in turn was named after the Kansa Native American tribe, which inhabited the area. The tribe's name is often said to mean "people of the wind" or "people of the south...
(Indian Territory), Burr Oak, Iowa and Minnesota
Minnesota
Minnesota is a U.S. state located in the Midwestern United States. The twelfth largest state of the U.S., it is the twenty-first most populous, with 5.3 million residents. Minnesota was carved out of the eastern half of the Minnesota Territory and admitted to the Union as the thirty-second state...
. In 1879 they settled on a homestead near De Smet. When Charles and Caroline Ingalls decided to sell their farm because of the persistent pattern of dry years of weather, combined with Charles Ingalls advancing age and inability to take care of his large acreage, he built the family a home on Third Street in the town of De Smet
De Smet, South Dakota
-External links:* * * * *...
in Dakota Territory
Dakota Territory
The Territory of Dakota was an organized incorporated territory of the United States that existed from March 2, 1861, until November 2, 1889, when the final extent of the reduced territory was split and admitted to the Union as the states of North and South Dakota.The Dakota Territory consisted of...
. He made his living primarily as a carpenter from that time onward until his death of heart disease at age 66 - a normal lifespan for an adult male at that time.

After her husband Charles died in 1902 of heart disease, Caroline rented rooms out in her house for income. De Smet residents remember Caroline sometimes sitting outside with her blind daughter Mary. Although they attended church, Caroline was a very private person who very rarely left home. She was deeply religious and Mary's blindness was an extreme blow to Caroline's hopes for her bright daughter.

The series The Caroline Years, an extension of the Little House series, by Maria D. Wilkes and Celia Wilkins, follows Caroline Quiner from her fifth year to her late teens, up to her engagement to Charles. The names, dates and people mentioned in the books are true, but much of the content of the books is, by necessity, fictionalized. The first title in the series is Little House in Brookfield.

Additionally, Caroline was portrayed in the television adaptation of Little House on the Prairie by :