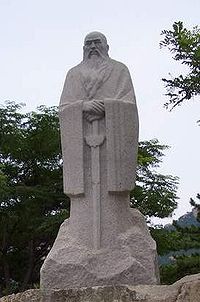 Laoshan is a famous mountain
Mountain
Image:Himalaya_annotated.jpg|thumb|right|The Himalayan mountain range with Mount Everestrect 58 14 160 49 Chomo Lonzorect 200 28 335 52 Makalurect 378 24 566 45 Mount Everestrect 188 581 920 656 Tibetan Plateaurect 250 406 340 427 Rong River...
in Qingdao
Qingdao
' also known in the West by its postal map spelling Tsingtao, is a major city with a population of over 8.715 million in eastern Shandong province, Eastern China. Its built up area, made of 7 urban districts plus Jimo city, is home to about 4,346,000 inhabitants in 2010.It borders Yantai to the...
, Shandong
Shandong
' is a Province located on the eastern coast of the People's Republic of China. Shandong has played a major role in Chinese history from the beginning of Chinese civilization along the lower reaches of the Yellow River and served as a pivotal cultural and religious site for Taoism, Chinese...
province, China
People's Republic of China
China , officially the People's Republic of China , is the most populous country in the world, with over 1.3 billion citizens. Located in East Asia, the country covers approximately 9.6 million square kilometres...
. It lies about 30 km east of the downtown of Qingdao, and is an important tourist destination. It is the highest coastal mountain in China, peaking at 1132.7m. It is known as one of the birthplaces of Taoism
Taoism
Taoism refers to a philosophical or religious tradition in which the basic concept is to establish harmony with the Tao , which is the mechanism of everything that exists...
.

Laoshan of Taoism
Taoism
Taoism refers to a philosophical or religious tradition in which the basic concept is to establish harmony with the Tao , which is the mechanism of everything that exists...
in China for many centuries. In 412
412
Year 412 was a leap year starting on Monday of the Julian calendar. At the time, it was known as the Year of the Consulship of Honorius and Theodosius...
the Chinese Buddhist
Buddhism
Buddhism is a religion and philosophy encompassing a variety of traditions, beliefs and practices, largely based on teachings attributed to Siddhartha Gautama, commonly known as the Buddha . The Buddha lived and taught in the northeastern Indian subcontinent some time between the 6th and 4th...
pilgrim Faxian
Faxian
Faxian was a Chinese Buddhist monk who traveled to India, Sri Lanka and Kapilavastu in today's Nepal between 399 and 412 to acquire Buddhist scriptures...
landed at Laoshan on his return from India
India
India , officially the Republic of India , is a country in South Asia. It is the seventh-largest country by geographical area, the second-most populous country with over 1.2 billion people, and the most populous democracy in the world...
.

Many of the mountains' numerous palaces, Taoist temples, and nunneries have not survived to the present. Taiqing Palace Taoism Temple (or Xiaqing Palace Taoism Temple), built during the North Song Dynasty
Song Dynasty
The Song Dynasty was a ruling dynasty in China between 960 and 1279; it succeeded the Five Dynasties and Ten Kingdoms Period, and was followed by the Yuan Dynasty. It was the first government in world history to issue banknotes or paper money, and the first Chinese government to establish a...
, is the largest. Sanhuang Palace, part of the Taiging complex, has two ancient Cypress
Cypress
Cypress is the name applied to many plants in the cypress family Cupressaceae, which is a conifer of northern temperate regions. Most cypress species are trees, while a few are shrubs...
trees, said to have been planted during the Han Dynasty
Han Dynasty
The Han Dynasty was the second imperial dynasty of China, preceded by the Qin Dynasty and succeeded by the Three Kingdoms . It was founded by the rebel leader Liu Bang, known posthumously as Emperor Gaozu of Han. It was briefly interrupted by the Xin Dynasty of the former regent Wang Mang...
.

Many gamblers visit Laoshan for the famous tree located in the mountain, as it is said that three pats of the tree's trunk will bring instant luck for those seeking money.

Tsingtao Brewery
Tsingtao Brewery
Tsingtao Brewery Co.,Ltd. is China's second largest brewery. It was founded in 1903 by German settlers and now claims about 15% of domestic market share. The beer is produced in Tsingtao/Qingdao in Shandong province , but the name of the beer uses the old École française d'Extrême-Orient...
is made famous because its beer is said to be brewed with Laoshan spring water.
The source of this article is wikipedia, the free encyclopedia.  The text of this article is licensed under the GFDL.