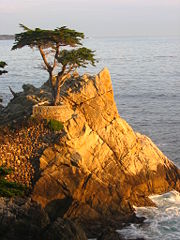 Cypress is the name applied to many plant
Plant
Plants are living organisms belonging to the kingdom Plantae. Precise definitions of the kingdom vary, but as the term is used here, plants include familiar organisms such as trees, flowers, herbs, bushes, grasses, vines, ferns, mosses, and green algae. The group is also called green plants or...
s in the cypress family Cupressaceae
Cupressaceae
The Cupressaceae or cypress family is a conifer family with worldwide distribution. The family includes 27 to 30 genera , which include the junipers and redwoods, with about 130-140 species in total. They are monoecious, subdioecious or dioecious trees and shrubs from 1-116 m tall...
, which is a conifer
Pinophyta
The conifers, division Pinophyta, also known as division Coniferophyta or Coniferae, are one of 13 or 14 division level taxa within the Kingdom Plantae. Pinophytes are gymnosperms. They are cone-bearing seed plants with vascular tissue; all extant conifers are woody plants, the great majority being...
of northern temperate regions. Most cypress species are tree
Tree
A tree is a perennial woody plant. It is most often defined as a woody plant that has many secondary branches supported clear of the ground on a single main stem or trunk with clear apical dominance. A minimum height specification at maturity is cited by some authors, varying from 3 m to...
s, while a few are shrub
Shrub
A shrub or bush is distinguished from a tree by its multiple stems and shorter height, usually under 5–6 m tall. A large number of plants may become either shrubs or trees, depending on the growing conditions they experience...
s. Most plants bearing the common name cypress are in the genera Cupressus
Cupressus
The genus Cupressus is one of several genera within the family Cupressaceae that have the common name cypress; for the others, see cypress. It is considered a polyphyletic group...
and Chamaecyparis
Chamaecyparis
Chamaecyparis is a genus of conifers in the cypress family Cupressaceae, native to eastern Asia and western and eastern North America. In the nursery trade it is often incorrectly known as "false cypress" for lack of other common name, so as to distinguish it from other similar genera bearing...
, but several other genera in the family also carry the name.

The word "cypress" is derived from Old French
Old French
Old French was the Romance dialect continuum spoken in territories that span roughly the northern half of modern France and parts of modern Belgium and Switzerland from the 9th century to the 14th century...
"cipres", which was imported from Latin
Latin
Latin is an Italic language originally spoken in Latium and Ancient Rome. It, along with most European languages, is a descendant of the ancient Proto-Indo-European language. Although it is considered a dead language, a number of scholars and members of the Christian clergy speak it fluently, and...
"cyparissus," the latinisation
Latinisation (literature)
Latinisation is the practice of rendering a non-Latin name in a Latin style. It is commonly met with for historical personal names, with toponyms, or for the standard binomial nomenclature of the life sciences. It goes further than Romanisation, which is the writing of a word in the Latin alphabet...
of the Greek
Greek language
Greek is an independent branch of the Indo-European family of languages. Native to the southern Balkans, it has the longest documented history of any Indo-European language, spanning 34 centuries of written records. Its writing system has been the Greek alphabet for the majority of its history;...
κυπάρισσος (kyparissos).


The Cupressaceae
Cupressaceae
The Cupressaceae or cypress family is a conifer family with worldwide distribution. The family includes 27 to 30 genera , which include the junipers and redwoods, with about 130-140 species in total. They are monoecious, subdioecious or dioecious trees and shrubs from 1-116 m tall...
family also contains 13-16 other genera (not listed above) that as of yet do not bear cypress in their common names.

The word cypress is also used as a descriptor for the angiosperm
Flowering plant
The flowering plants , also known as Angiospermae or Magnoliophyta, are the most diverse group of land plants. Angiosperms are seed-producing plants like the gymnosperms and can be distinguished from the gymnosperms by a series of synapomorphies...
vine in the bindweed
Bindweed
Bindweed may refer to:* Convolvulaceae , a family including about 60 genera and more than 1,650 species** Calystegia , a genus of about 25 species of flowering plants...
family Convolvulaceae
Convolvulaceae
Convolvulaceae, known commonly as the bindweed or morning glory family, are a group of about 60 genera and more than 1,650 species of mostly herbaceous vines, but also trees, shrubs and herbs.- Description :...
, known as the Cypress vine  (Ipomoea quamoclit).

The plant called "summer cypress" is Bassia scoparia (Amaranthaceae
Amaranthaceae
The flowering plant family Amaranthaceae, the Amaranth family, contains about 176 genera and 2,400 species.- Description :Most of these species are herbs or subshrubs; very few are trees or climbers. Some species are succulent....
).
The source of this article is wikipedia, the free encyclopedia.  The text of this article is licensed under the GFDL.