Lantapan is a first class municipality in the province of Bukidnon, Philippines. It used to be a barrio of Malaybalay City until its creation, by virtue of Republic Act No. 4787 enacted on 18 June 1968, as a separate municipality. According to the 2007 census of the National Census and Statistics Office, it has a population of 51,406 people with 9,880 households.

The Kitanglad Range is a very significant landmark in the cultural history of the indigenous peoples of Bukidnon with Mt. Dulangdulang considered as a sacred place. Being an ancestral domain, permission to enter must be secured from the tribal leaders of the Tala’andig tribe of Lantapan in deference to the Free Prior and Informed Consent (FPIC) mandated under the IPRA Law. Before a climb is made to Mt. Dulangdulang, a ritual is done to obtain the blessings of entering the sacred place.

The long trek to Mt. Dulangdulang’s summit offers a mountain climber the gift of picturesque landscapes, the unruffled ambiance of the dense forests, and the challenges of arduous trails. It’s pristine, natural beauty is nothing but perfect. The intricate kaleidoscope of old trees covered with moss and lichens render the forest with a mystical feel that would endear anyone who has a heart for nature and beauty. At the highest peak, a breathtaking panoramic view of the entire Kitanglad range is simply majestic. A particular plain at the summit offers a grandiose look at the distant Mt. Apo.

Lantapan’s genuinely virgin forests are home to a diverse variety of flora and fauna. There are orchids, berries, pitcher plants, lichens, and a host of other wild flowers. A number of mammal species also thrive in the dense forests, including squirrels, monkeys, bats, flying lemurs, deer, tarsiers and wild pigs among others. The Philippine eagle (Pithecophaga jefferyi) along with other bird species such as the serpent eagle and sparrow hawk takes its home within the Mt. Kitanglad Range.

The Tala’andig (one of the 7 tribes of Bukidnon) Ancestral Territory is native to Songco, Lantapan. It is a community of people who are consciously reviving and preserving the ancient ways and wisdom of the tribe. Customary law is also enforced in the community where traditional and tribal ways of resolving conflicts and maintaining peace are employed thereby protecting tribal relations and harmony among the dwellers. A school for living tradition was built as an avenue for elders to teach the young to learn and appreciate embroidery, dance, music, arts and literature. The rituals, music and arts, traditional knowledge and history – embodying the Tala’andig way of life – are taught and consciously practiced amidst the insurgence of modern ways and influences. Other activities involved earth paintings (painting utilizing soil as a medium), singing and dancing to traditional music, and making musical instruments and indigenous accessories among others.

Lantapan is also home to two world-class banana plantations: the Mount Kitanglad Agri-Ventures Inc. (MKAVI) and the Dole Banana Plantation with thousands of hectares of lands in the highland-barangays of the town planted with export quality bananas. The plantations started their operation in 1998 with thousand of residents of the municipality employed while ensuring that environmental conservation practices are observed.

Lantapan also boasts of plantations that are exemplary in their fields of specialization. The Binahon Agro-forestry Farm, located at Sitio Bol-ogan, Barangay Songco, Lantapan - along the slopes of Mt. Kitanglad – epitomizes the ideals of a balanced coexistence with nature. Situated some 1,300 meters above level, it has gained acclaim as a learning institution for farmers, agriculturists, and rural development workers interested in agroforestry and sustainable farming. The farm passes on to visitors remarkable farming techniques that value a harmonious relation with nature and the environment.

Run by the family of Henry Binahon, who is himself a farmer, forester, and sociologist, the Binahon Agro-forestry Farm utilizes modern technology to improve agroforestry but maintains the traditional way of growing agricultural produce done by our forebears. It is laden with various forest species such as Caribbean pine trees, lawaan, falcata, abaca, and eucalyptus. Fruit trees are also planted in the area with vegetables sown in between. Farm animals such as carabaos, horse, goats, sheep, hogs and other livestock animals are grown in the farm together with exotic honeybees and tilapia. The farm also offers facilities for lodging to visiting tourists, researchers, scientists and mountaineers that proffer a once-in-a-lifetime experience.

The Cinchona Plantation was established at Barangay Kaatuan, Lantapan in 1929 and is considered as one of the main tourist attractions in the municipality. Overlooking the Simayha Plains of Central Bukidnon, the plantation is said to be the only of its kind left in Asia and the Pacific where the medicinal plant Cinchona (Cinchona ledgeriana) is grown. Cinchona, is a medium-sized tropical tree that can grow up 80 feet with a 60-centimeter diameter, is a source of quinine that is used for malaria treatment.

The farm covers an area of 1,725 hectares where seven (7) Cinchona tree species are found and is planted mostly with Alvizza falcataria and other medicinal trees. Located 1,140 meters above sea level, the area is considered as the coldest place in Bukidnon with temperatures ranging from 64 to 56°F. Through a presidential proclamation issued in 1936, it was declared as the Cinchona Forest Reserve and now forms part of the protected area of the Mt. Kitanglad Range Natural Park. The Forest Reserve has since then been maintaining ecological balance in its surrounding communities and is protecting the watershed of the locality.

Barangay Kaatuan is also home to eight (8) amazing conjoint water falls – seven (7) water falls pouring its contents onto another water falls. This conjoint water falls is supplied by the Kulasihan River, acknowledged as one of the cleanest bodies of waters in the province of Bukidnon. Situated five kilometers from the barangay proper of Kaatuan called Block 2, the shortest route towards the Wonder Falls is through the land owned by the native Villanuevas. The amazing, soothing and relaxing atmosphere exuded by these conjoint waterfalls will surely entice one to come back after a trailing experience.

Lastly, Lantapan is known as the “vegetable basket” of Mindanao where high valued vegetables crops are grown, transported and marketed to the major cities of Malaybalay, Valencia, Cagayan de Oro, other parts of Mindanao and even as far as Metro Cebu. 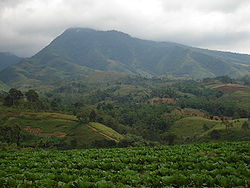 The climatic condition of Lantapan is relatively cool and humid with winds blowing northward direction. November to April is relatively dry and May brings the start of the rains which continue 'til October. Mountains of neighboring towns in the north protect it from cyclone storms.

Originally, the Talaandig were the main inhabitants of Lantapan. Then, migrants from the Visayas and Northern Luzon started to settle in the area, even during the Spanish colonial period. More inflow took place after the Second World War. This stream of settlers eventually led to the varied mix of ethnic groups in Lantapan. Visayan is the predominant language, followed by "Binukid". 1990 Census showed Lantapan's population have reached 41,581 with Kibangay as the most populated barangay. Its population growth rate between 1980-1990 of 4.18% was well above the national rate of 2.3 percent. With this, the population is expected to double in less than twenty years. In general, Lantapanons are friendly, you feel at home with them, straight away.

Presently, there is a total of 24 primary, elementary and secondary schools in Lantapan. These schools serve approximately 7,000 children. Day care centers under the Department of Social Welfare and Development provide preparatory education to pre-schoolers in the barangays.

Lantapan has agri-based economy. Farming has remained a dominant economic activity among the Lantapanons. The major crops grown are corn, coffee, cabbage and potatoes, sugarcane and other high valued crops and bananas also becoming an important commercial crop.

There are 428 commercial establishments registered at the Licensing Division of the municipality, 15 of which are classified under agro-industrial, manufacturing and servicing. Trading activities include wholesale buying of corn, coffee and vegetables by traders from within Lantapan, neighboring towns in Bukidnon and Cagayan de Oro City.

For finance, the informal credit or "suki" system prevails. In this arrangement, the trader is usually the "suki" who provides credit too and buys the products of the farmer. A few cooperatives in some barangays also extend small loans to their members. An Asian Hills Bank located at the Poblacion and established in 1978, is owned by a private corporation. Its portfolio includes agricultural, commercial and real estate loans.
Health Services

Potable water is distributed through individual installations of 3,958 households. A feasibility study is being developed for the establishments of an improved and modern water system for Lantapan which entails tapping the Kulasihan and Songco water sources for an estimated flow of 45,018.168 cubic meter per hour.
Peace and Order

Lantapan is generally peaceful. Security in the area is ably maintained by the local police force. Trained civilian forces, the "Bantay-Bayan" and the Civilian Volunteer Organization (CVO) in the barangays also provide support to crime prevention. 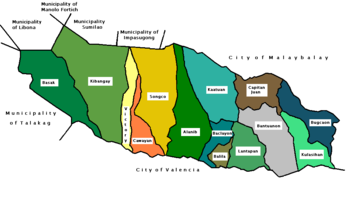 Lantapan is politically subdivided into 14 barangay
Barangay
A barangay is the smallest administrative division in the Philippines and is the native Filipino term for a village, district or ward...
s.