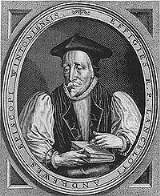 Overview
Lancelot Andrewes was an English bishop and scholar, who held high positions in the Church of England
Church of England
The Church of England is the officially established Christian church in England and the Mother Church of the worldwide Anglican Communion. The church considers itself within the tradition of Western Christianity and dates its formal establishment principally to the mission to England by St...
during the reigns of Queen Elizabeth I
Elizabeth I of England
Elizabeth I was queen regnant of England and Ireland from 17 November 1558 until her death. Sometimes called The Virgin Queen, Gloriana, or Good Queen Bess, Elizabeth was the fifth and last monarch of the Tudor dynasty...
and King James I
James I of England
James VI and I was King of Scots as James VI from 24 July 1567 and King of England and Ireland as James I from the union of the English and Scottish crowns on 24 March 1603...
. During the latter's reign, Andrewes served successively as Bishop of Chichester
Bishop of Chichester
The Bishop of Chichester is the Ordinary of the Church of England Diocese of Chichester in the Province of Canterbury. The diocese covers the Counties of East and West Sussex. The see is in the City of Chichester where the seat is located at the Cathedral Church of the Holy Trinity...
, Ely
Bishop of Ely
The Bishop of Ely is the Ordinary of the Church of England Diocese of Ely in the Province of Canterbury. The diocese roughly covers the county of Cambridgeshire , together with a section of north-west Norfolk and has its see in the City of Ely, Cambridgeshire, where the seat is located at the...
and Winchester
Bishop of Winchester
The Bishop of Winchester is the head of the Church of England diocese of Winchester, with his cathedra at Winchester Cathedral in Hampshire.The bishop is one of five Church of England bishops to be among the Lords Spiritual regardless of their length of service. His diocese is one of the oldest and...
and oversaw the translation of the Authorized Version
King James Version of the Bible
The Authorized Version, commonly known as the King James Version, King James Bible or KJV, is an English translation of the Christian Bible by the Church of England begun in 1604 and completed in 1611...
(or King James Version) of the Bible
Bible
The Bible refers to any one of the collections of the primary religious texts of Judaism and Christianity. There is no common version of the Bible, as the individual books , their contents and their order vary among denominations...
. In the Church of England he is commemorated on 25 September with a Lesser Festival
Lesser Festival
Lesser Festivals are a type of observance in the Church of England, considered to be less significant than a Principal Feast, Principal Holy Day, or Festival, but more significant than a Commemoration. Whereas Principal Feasts must be celebrated, it is not obligatory to observe Lesser Festivals...
.
Andrewes was born in 1555 in Barking
Barking
Barking is a suburban town in the London Borough of Barking and Dagenham, in East London, England. A retail and commercial centre situated in the west of the borough, it lies east of Charing Cross. Barking was in the historic county of Essex until it was absorbed by Greater London. The area is...
, Essex
Essex
Essex is a ceremonial and non-metropolitan county in the East region of England, and one of the home counties. It is located to the northeast of Greater London. It borders with Cambridgeshire and Suffolk to the north, Hertfordshire to the west, Kent to the South and London to the south west...
(now Greater London
Greater London
Greater London is the top-level administrative division of England covering London. It was created in 1965 and spans the City of London, including Middle Temple and Inner Temple, and the 32 London boroughs. This territory is coterminate with the London Government Office Region and the London...
), of an ancient Suffolk
Suffolk
Suffolk is a non-metropolitan county of historic origin in East Anglia, England. It has borders with Norfolk to the north, Cambridgeshire to the west and Essex to the south. The North Sea lies to the east...
family later domiciled at Chichester Hall, Rawreth
Rawreth
Rawreth is situated between Wickford and Rayleigh.The area is mainly agricultural, sparsely populated and with a small amount of industry.Historically, most of the farmhouses in Rawreth were moated manors, many of which survive today....
; his father, Thomas, was master of Trinity House
Trinity House
The Corporation of Trinity House of Deptford Strond is the official General Lighthouse Authority for England, Wales and other British territorial waters...
.
x