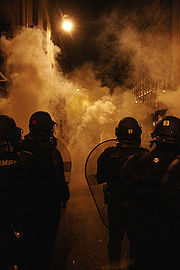 Tear gas, formally known as a lachrymatory agent or lachrymator (from lacrima meaning "a tear
Tears
Tears are secretions that clean and lubricate the eyes. Lacrimation or lachrymation is the production or shedding of tears....
" in Latin
Latin
Latin is an Italic language originally spoken in Latium and Ancient Rome. It, along with most European languages, is a descendant of the ancient Proto-Indo-European language. Although it is considered a dead language, a number of scholars and members of the Christian clergy speak it fluently, and...
), is a non-lethal chemical weapon that stimulates the corneal nerves
Cornea
The cornea is the transparent front part of the eye that covers the iris, pupil, and anterior chamber. Together with the lens, the cornea refracts light, with the cornea accounting for approximately two-thirds of the eye's total optical power. In humans, the refractive power of the cornea is...
in the eye
Human eye
The human eye is an organ which reacts to light for several purposes. As a conscious sense organ, the eye allows vision. Rod and cone cells in the retina allow conscious light perception and vision including color differentiation and the perception of depth...
s to cause tears
Tears
Tears are secretions that clean and lubricate the eyes. Lacrimation or lachrymation is the production or shedding of tears....
, pain
Pain
Pain is an unpleasant sensation often caused by intense or damaging stimuli such as stubbing a toe, burning a finger, putting iodine on a cut, and bumping the "funny bone."...
, and even blindness
Blindness
Blindness is the condition of lacking visual perception due to physiological or neurological factors.Various scales have been developed to describe the extent of vision loss and define blindness...
. Common lachrymators include OC, CS
CS gas
2-chlorobenzalmalononitrile is the defining component of a "tear gas" commonly referred to as CS gas, which is used as a riot control agent...
, CR
CR gas
CR gas or dibenzoxazepine, chemically dibenz[b,f][1,4]oxazepine, is an incapacitating agent and a lachrymatory agent. CR was developed by the British Ministry of Defence as a riot control agent in the late 1950s and early 1960s....
, CN
CN gas
Phenacyl chloride is a substituted acetophenone. It is a useful building block in organic chemistry. Apart from that, it has been historically used as a riot control agent, where it is designated CN.-Preparation:...
, nonivamide
Nonivamide
Nonivamide, also called pelargonic acid vanillylamide or PAVA, is an organic compound and a capsaicinoid. It is an amide of pelargonic acid and vanillyl amine. It is present in chili peppers, but is commonly manufactured synthetically...
, bromoacetone
Bromoacetone
Bromoacetone is a chemical compound with the formula 3CCH2. This colorless liquid is a lachrymatory agent. It is a precursor to other organic compounds....
, phenacyl bromide
Phenacyl bromide
Phenacyl bromide is the organic compound with the formula C6H5CCH2Br. This colourless solid is a powerful lachrymator as well as a useful precursor to other organic compounds.It is prepared by bromination of acetophenone:...
, xylyl bromide
Xylyl bromide
Xylyl bromide, also known as methylbenzyl bromide or T-stoff, is a poisonous organic chemical compound with the formula C8H9Br, formerly used as a tear gas...
and syn-propanethial-S-oxide
Syn-propanethial-S-oxide
syn-Propanethial S-oxide is a gas that acts as a lachrymatory agent . The chemical is released from onions, Allium cepa, as they are sliced...
(from onions).

Tear gas works by irritating mucous membranes in the eyes, nose, mouth and lungs, and causes crying, sneezing, coughing, difficulty breathing, pain in the eyes, temporary blindness, etc. Lachrymators are thought to act by attacking sulphydryl
Thiol
In organic chemistry, a thiol is an organosulfur compound that contains a carbon-bonded sulfhydryl group...
functional groups in enzyme
Enzyme
Enzymes are proteins that catalyze chemical reactions. In enzymatic reactions, the molecules at the beginning of the process, called substrates, are converted into different molecules, called products. Almost all chemical reactions in a biological cell need enzymes in order to occur at rates...
s. One of the most probable protein targets is the TRPA1 ion channel that is expressed in sensory nerves (trigeminal nerve) of the eyes, nose and mouth. First used in 1915, xylyl bromide was a popular tearing agent since it was easily brewed.

Lachrymatory agents are commonly used as riot control
Riot control
Riot control refers to the measures used by police, military, or other security forces to control, disperse, and arrest civilians who are involved in a riot, demonstration, or protest. Law enforcement officers or soldiers have long used non-lethal weapons such as batons and whips to disperse crowds...
and chemical warfare
Chemical warfare
Chemical warfare involves using the toxic properties of chemical substances as weapons. This type of warfare is distinct from Nuclear warfare and Biological warfare, which together make up NBC, the military acronym for Nuclear, Biological, and Chemical...
agents. During World War I, more toxic lachrymatory agents were used. Certain lachrymatory agents are often used by police
Police
The police is a personification of the state designated to put in practice the enforced law, protect property and reduce civil disorder in civilian matters. Their powers include the legitimized use of force...
to force compliance, most notably tear gas. In some countries (e.g. Finland, Australia, and the United States), another issued substance is mace
Mace (spray)
Chemical Mace is a tear gas in the form of an aerosol spray which propels a lachrymatory agent mixed with a volatile solvent. It is sometimes used as a self-defense device...
, which is used as a personal attack repellent.