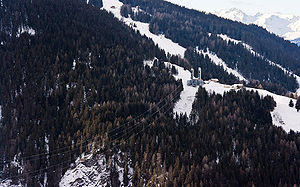 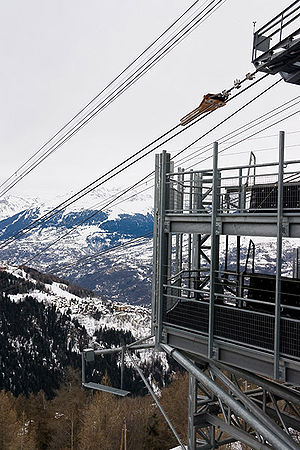 The Vanoise Express is a double-decker cable car
Aerial tramway
An aerial tramway , cable car , ropeway or aerial tram is a type of aerial lift which uses one or two stationary ropes for support while a third moving rope provides propulsion...
that links La Plagne
La Plagne
La Plagne is a French ski area in the alpine valley of the Tarentaise . Since 2003, La Plagne and the neighbouring resort of Les Arcs form Paradiski's ski area...
with Les Arcs
Les Arcs
Les Arcs is a ski resort located in Savoie, France, in the Tarentaise Valley town of Bourg-Saint-Maurice. Initially created by Robert Blanc and Roger Godino...
ski resorts in the Alps
Alps
The Alps is one of the great mountain range systems of Europe, stretching from Austria and Slovenia in the east through Italy, Switzerland, Liechtenstein and Germany to France in the west....
, acting as a vital link in the Paradiski
Paradiski
Paradiski is a ski-area in the Tarentaise Valley offering uninterrupted skiing in between the areas of Les Arcs, Peisey-Vallandry and La Plagne. The area is linked, since December 2003, by the Vanoise Express...
area.

Ordered by Compagnie des Alpes
Compagnie des Alpes
Compagnie des Alpes is a French company created in 1989 to operate many ski resorts in Europe. Compagnie des Alpes is a part of Caisse des dépôts et consignations.-History:...
and built by Poma
Poma
Poma, also known as Pomagalski S.A. is a French company, specialising in construction of cable-driven lift systems, including fixed and detachable chairlifts, gondola lifts, funiculars, aerial tramways, people movers, and surface lifts. Poma has installed more than 7800 devices on five continents,...
in time for the '03-'04 season, the lift stretches 1,800 metres, 380 metres over the valley, takes 4 minutes to cross, and cost over 15 million Euros to complete. It was officially opened in December 2003. It has a capacity of over 200 people. It is not a conventional cable car but the two units can operate separately and have as well individual spare engines. The lift operates without a single supporting pylon.

As a result of safety inspections in December 2007, the operators announced that this lift would remain shut for the entire 2007/2008 season as repairs could not be undertaken until the spring. This closure effectively shut down Paradiski for that season. It opened up again for 2008-09.