The Kvichak River is part of the watershed downstream of the proposed Pebble Mine
Pebble Mine
Pebble Mine is the common name of an advanced mineral exploration project investigating a very large porphyry copper, gold, and molybdenum mineral deposit in the Bristol Bay region of Southwest Alaska, near Lake Iliamna and Lake Clark. The proposal to mine the ore deposit, using large-scale...
. 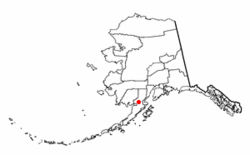