Encyclopedia
Kurs is a radio
Radio
Radio is the transmission of signals through free space by modulation of electromagnetic waves with frequencies below those of visible light. Electromagnetic radiation travels by means of oscillating electromagnetic fields that pass through the air and the vacuum of space...
telemetry
Telemetry
Telemetry is a technology that allows measurements to be made at a distance, usually via radio wave transmission and reception of the information. The word is derived from Greek roots: tele = remote, and metron = measure...
system used by the Soviet
Soviet space program
The Soviet space program is the rocketry and space exploration programs conducted by the former Union of Soviet Socialist Republics from the 1930s until its dissolution in 1991...
and later Russian space program. 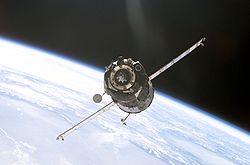 Kurs was developed by the Research Institute of Precision Instruments (NII TP) before 1985 and manufactured by the Kiev Radio Factory .

Kurs was the successor to the IGLA system and today provides navigation beaconing for Russian space vehicles including the Soyuz spacecraft
Soyuz spacecraft
Soyuz , Union) is a series of spacecraft initially designed for the Soviet space programme by the Korolyov Design Bureau in the 1960s, and still in service today...
and Progress spacecraft
Progress spacecraft
The Progress is a Russian expendable freighter spacecraft. The spacecraft is an unmanned resupply spacecraft during its flight but upon docking with a space station, it allows astronauts inside, hence it is classified manned by the manufacturer. It was derived from the Soyuz spacecraft, and is...
. Kurs provided the automated docking system for all Russian spacecraft that docked with the Mir
Mir
Mir was a space station operated in low Earth orbit from 1986 to 2001, at first by the Soviet Union and then by Russia. Assembled in orbit from 1986 to 1996, Mir was the first modular space station and had a greater mass than that of any previous spacecraft, holding the record for the...
space station. When used for docking, the Soyuz or Progress vehicle broadcasts radar pulses from multiple antennas. The variation in strength between the antennas allows the system to compute relative position, attitude, and approach rate. The system is designed for automatic rendezvous and docking, but in an emergency cosmonauts may take command of the vehicle either locally, or from the International Space Station.

After the dissolution of the Soviet Union in 1991, the Kurs system became the property of Ukraine
Ukraine
Ukraine is a country in Eastern Europe. It has an area of 603,628 km², making it the second largest contiguous country on the European continent, after Russia...
; its manufacturer became a competitor in the space launch business with RKA. Due to hard-currency problems, Kiev also raised the price of the Kurs system. Consequently, RKA sought to phase out its use in its vehicles.

The now Russian-built antenna part of the Kurs system also serves as an independent and redundant docking monitoring system for the European Automated Transfer Vehicle
Automated Transfer Vehicle
The Automated Transfer Vehicle or ATV is an expendable, unmanned resupply spacecraft developed by the European Space Agency . ATVs are designed to supply the International Space Station with propellant, water, air, payload and experiments...
. It serves as an additional monitoring system but cannot be used to control the approach or docking of ATV in any way.
The source of this article is wikipedia, the free encyclopedia.  The text of this article is licensed under the GFDL.