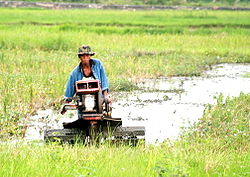 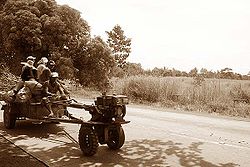 A kuliglig is a vehicle
Vehicle
A vehicle is a device that is designed or used to transport people or cargo. Most often vehicles are manufactured, such as bicycles, cars, motorcycles, trains, ships, boats, and aircraft....
composed of a two-wheeled trailer
Trailer (vehicle)
A trailer is generally an unpowered vehicle pulled by a powered vehicle. Commonly, the term trailer refers to such vehicles used for transport of goods and materials....
pulled by a two wheeled tractor
Two-wheel tractor
Two-wheel tractor or walking tractor are generic terms understood in the USA and in parts of Europe to represent a single-axle tractor, which is a tractor with one axle, self-powered and self-propelled, which can pull and power various farm implements such as a trailer, cultivator or harrow, a...
similar to a rotary tiller. It is powered by multi-purpose diesel or gasoline
Gasoline
Gasoline , or petrol , is a toxic, translucent, petroleum-derived liquid that is primarily used as a fuel in internal combustion engines. It consists mostly of organic compounds obtained by the fractional distillation of petroleum, enhanced with a variety of additives. Some gasolines also contain...
engine
Engine
An engine or motor is a machine designed to convert energy into useful mechanical motion. Heat engines, including internal combustion engines and external combustion engines burn a fuel to create heat which is then used to create motion...
, commonly used in the provinces of the Philippines
Philippines
The Philippines , officially known as the Republic of the Philippines , is a country in Southeast Asia in the western Pacific Ocean. To its north across the Luzon Strait lies Taiwan. West across the South China Sea sits Vietnam...
. The kuliglig traces its etymology
Etymology
Etymology is the study of the history of words, their origins, and how their form and meaning have changed over time.For languages with a long written history, etymologists make use of texts in these languages and texts about the languages to gather knowledge about how words were used during...
from the Filipino
Filipino language
This move has drawn much criticism from other regional groups.In 1987, a new constitution introduced many provisions for the language.Article XIV, Section 6, omits any mention of Tagalog as the basis for Filipino, and states that:...
term kuliglig, meaning "cricket
Cricket (insect)
Crickets, family Gryllidae , are insects somewhat related to grasshoppers, and more closely related to katydids or bush crickets . They have somewhat flattened bodies and long antennae. There are about 900 species of crickets...
" which was adopted by one manufacturer as a brand.