Why do carabao moves its tail towards its body?
More

Encyclopedia
The carabao or Bubalus bubalis carabanesis is a subspecies of the domesticated water buffalo (Bubalus bubalis) found in the Philippines
Philippines
The Philippines , officially known as the Republic of the Philippines , is a country in Southeast Asia in the western Pacific Ocean. To its north across the Luzon Strait lies Taiwan. West across the South China Sea sits Vietnam...
, Guam
Guam
Guam is an organized, unincorporated territory of the United States located in the western Pacific Ocean. It is one of five U.S. territories with an established civilian government. Guam is listed as one of 16 Non-Self-Governing Territories by the Special Committee on Decolonization of the United...
, Indonesia
Indonesia
Indonesia , officially the Republic of Indonesia , is a country in Southeast Asia and Oceania. Indonesia is an archipelago comprising approximately 13,000 islands. It has 33 provinces with over 238 million people, and is the world's fourth most populous country. Indonesia is a republic, with an...
, Malaysia, and various parts of Southeast Asia
Southeast Asia
Southeast Asia, South-East Asia, South East Asia or Southeastern Asia is a subregion of Asia, consisting of the countries that are geographically south of China, east of India, west of New Guinea and north of Australia. The region lies on the intersection of geological plates, with heavy seismic...
. Carabaos are associated with farmers, being the farm animal of choice for pulling both a plow and the cart used to haul produce to the market.

Carabaos are indigenous to Southeast Asia
Southeast Asia
Southeast Asia, South-East Asia, South East Asia or Southeastern Asia is a subregion of Asia, consisting of the countries that are geographically south of China, east of India, west of New Guinea and north of Australia. The region lies on the intersection of geological plates, with heavy seismic...
. Adult carabaos weigh seven to eight hundred kilograms—almost 2,000 pounds—and have fairly long gray or black hair thinly covering their huge bodies. They have a tuft of hair on their forehead, and at the tip of their tail. Normally, they are silent and docile, but they will give a trembling snort if they are surprised.

Both male and female have massive horns. Since the carabao has no sweat glands, it cools itself by lying in a waterhole or mud during the heat of the day. Mud, caked on to its body, also protects it from bothersome insects.

The carabao eats grass and other vegetation, feeding mainly in the cool of the mornings and evenings. In some places of the world the carabao is a source of milk just like the cow, or it may be slaughtered for its hide and its meat. Its life span is 18 to 20 years and the female carabao can deliver one calf each year.

The carabao is considered a national symbol of Guam
Guam
Guam is an organized, unincorporated territory of the United States located in the western Pacific Ocean. It is one of five U.S. territories with an established civilian government. Guam is listed as one of 16 Non-Self-Governing Territories by the Special Committee on Decolonization of the United...
. They were imported from the Philippines in the late 17th century during the Spanish colonial administration of Guam as a beast of burden and as a means of transportation. They were used for farming and to pull "carabao carts." As recently as the early 1960s, carabao races were a popular sport in the island, especially during fiestas.

Today, carabaos are a part of the popular culture in this American territory. Carabaos are often brought to carnivals or other festivities and used as a popular ride for kids. Carabao meat is sometimes eaten as a delicacy, although this is not common these days.

While carabaos were fairly common in Guam before the 20th century, with a population numbering in the thousands, today they are rare in most parts of the island. The exception is in the U.S. Naval Magazine in the village of Santa Rita
Santa Rita
Santa Rita may refer to:*Rita of Cascia, a Catholic saint*Associação Atlética Santa Rita, a Brazilian football club-Places:*Brazil**Santa Rita, Macapá, a borough in the city of Macapá in Amapá state...
, where the carabaos were protected from hunters as the Naval Magazine is fenced on all sides. The carabao population of Naval Magazine has grown to several hundred, to the point that they have become a pest and cause environmental damage and pollute the Naval water supply in the Fena Reservoir. In 2003, the Navy, in a controversial move that was protested by many Chamorro people, began a program of extermination to control the carabao population of Naval Magazine. 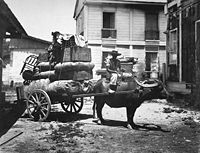 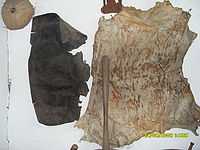 Water buffalo have been domesticated in the Philippines as far back as pre-Hispanic times and are often used by farmers in the Philippines to plow the fields and as a means of transportation. The carabao is one of the most important animals in the country, especially in agriculture. Carabao skin was once used extensively in the Philippines to create a variety of products, including the armor of pre-colonial Filipino warriors.

One of the many reasons for the failure of the attempted Japanese pacification of the Philippines during their 1941-1945 occupation was their indifference to the basics of the Filipino economy. The carabaos provided the necessary labor that allowed Filipino farmers to grow rice and other staples. Japanese army patrols would not only confiscate the rice but would also slaughter the carabos for meat, thereby preventing the farmers from growing enough rice to feed the large population. Before World War II, there were an estimated three million carabaos in the Philippines. By the end of the War it is estimated that nearly 70% of them had been lost.

The old “payatak” method of farming is still the method of choice in Northern Samar
Northern Samar
Northern Samar is a province of the Philippines located in the Eastern Visayas region. Its capital is Catarman and is located at the northern portion of the island of Samar. Bordering the province to the south are the provinces of Samar and Eastern Samar...
. The soil of the rice paddy is first softened with rainwater or diverted watershed, then the farmer guides a group of carabaos in trampling the planting area until it is soggy enough to receive the rice seedlings. This time consuming task produces lower yields and lower income when compared with the advancement in irrigated fields. In the late 1980s, the carabao puppet character Kardong Kalabaw became popular as a symbol of the Filipino people's hard work and sense of industry.