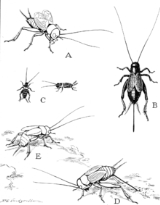 How many species of crickets are there, REALLY? There's a lot of answers and i need to know for my science project. Also, I need to understand more de...
More
x