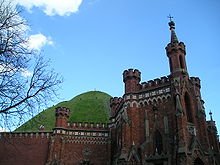 Kościuszko Mound in Kraków
Kraków
Kraków also Krakow, or Cracow , is the second largest and one of the oldest cities in Poland. Situated on the Vistula River in the Lesser Poland region, the city dates back to the 7th century. Kraków has traditionally been one of the leading centres of Polish academic, cultural, and artistic life...
, Poland
Poland
Poland , officially the Republic of Poland , is a country in Central Europe bordered by Germany to the west; the Czech Republic and Slovakia to the south; Ukraine, Belarus and Lithuania to the east; and the Baltic Sea and Kaliningrad Oblast, a Russian exclave, to the north...
, erected by Cracovians in commemoration of the Polish national leader Tadeusz Kościuszko
Tadeusz Kosciuszko
Andrzej Tadeusz Bonawentura Kościuszko was a Polish–Lithuanian and American general and military leader during the Kościuszko Uprising. He is a national hero of Poland, Lithuania, the United States and Belarus...
, is an artificial mound
Mound
A mound is a general term for an artificial heaped pile of earth, gravel, sand, rocks, or debris. The most common use is in reference to natural earthen formation such as hills and mountains, particularly if they appear artificial. The term may also be applied to any rounded area of topographically...
modeled after Kraków's prehistoric mounds of Krak
Krakus
Krakus, Krak or Grakch was a legendary Polish prince and founder of Kraków, the ruler of the tribe of Lechitians . Krakus is also credited with building Wawel Castle. The first recorded mention of Krakus, then spelled Grakch, is in the Chronica seu originale regum et principum Poloniae from 1190...
and Wanda
Princess Wanda
Princess Wanda was the legendary daughter of Krakus, legendary founder of Kraków. Upon her father's death, she became queen of the Poles, but committed suicide to avoid an unwanted marriage....
. A serpentine path leads to the top, approx. 326 metres (1,070 ft) above sea level, with a panoramic view of the Vistula River and the city. It was completed in November 1823. The location selected for the monument was the natural Blessed Bronisława Hill , also known as Sikornik, situated in the western part of Kraków's Zwierzyniec District. It is one of Kraków's four mounds.

The construction was financed by donations from Poles living in all territories of Poland under foreign occupation
Partitions of Poland
The Partitions of Poland or Partitions of the Polish–Lithuanian Commonwealth took place in the second half of the 18th century and ended the existence of the Polish–Lithuanian Commonwealth, resulting in the elimination of sovereign Poland for 123 years...
. For three years beginning in 1820, people of all ages and class voluntarily constructed the Mound to the height of 34 metres (112 ft). Work was supervised by a Committee for the Construction of the Tadeusz Kościuszko Monument. At the base of the Mound the Founding Act was deposited in a glass and marble case. At the top, a granite boulder, brought from the Tatra Mountains
Tatra Mountains
The Tatra Mountains, Tatras or Tatra , are a mountain range which forms a natural border between Slovakia and Poland, and are the highest mountain range in the Carpathian Mountains...
was placed, bearing the inscription “Kościuszce” (To Kościuszko). Inside the mound urns were buried with soil from the Polish and American battlefields where Kościuszko fought.

Between 1850 – 1854 the Austrian authorities
Habsburg Monarchy
The Habsburg Monarchy covered the territories ruled by the junior Austrian branch of the House of Habsburg , and then by the successor House of Habsburg-Lorraine , between 1526 and 1867/1918. The Imperial capital was Vienna, except from 1583 to 1611, when it was moved to Prague...
built a brick citadel
Citadel
A citadel is a fortress for protecting a town, sometimes incorporating a castle. The term derives from the same Latin root as the word "city", civis, meaning citizen....
around the Mound and began using it as a strategic lookout. As compensation for an earlier historical church that had been demolished, a neo-Gothic
Gothic Revival architecture
The Gothic Revival is an architectural movement that began in the 1740s in England...
chapel of Blessed Bronisława was also built. However, the Austrian fortifications, including the gateway and the south-western rampart
Defensive wall
A defensive wall is a fortification used to protect a city or settlement from potential aggressors. In ancient to modern times, they were used to enclose settlements...
and entrenchment
Trench warfare
Trench warfare is a form of occupied fighting lines, consisting largely of trenches, in which troops are largely immune to the enemy's small arms fire and are substantially sheltered from artillery...
were eventually dismantled following World War II
World War II
World War II, or the Second World War , was a global conflict lasting from 1939 to 1945, involving most of the world's nations—including all of the great powers—eventually forming two opposing military alliances: the Allies and the Axis...
, between 1945 and 1956.

Next to the Mound there is a museum devoted to Kościuszko, that displays artifacts and mementoes of his life and achievements. In 1997, heavy rains eroded the Mound, thus threatening its existence. It went through a restoration process from 1999 till 2003 in which state-of-the-art technology and modern materials were used. The Mound was equipped with a drainage system and a new waterproofing membrane.