Encyclopedia
Kongbap is a Korean dish consisting of white
White rice
White rice is the name given to milled rice that has had its husk, bran, and germ removed. This alters the flavour, texture and appearance of the rice and helps prevent spoilage and extend its storage life. After milling, the rice is polished, resulting in a seed with a bright, white, shiny...
or brown
Brown rice
Brown rice is unmilled or partly milled rice, a kind of whole, natural grain. It has a mild nutty flavor, is chewier and more nutritious than white rice, but goes rancid more quickly because the germ—which is removed to make white rice—contains fats that can spoil...
rice
Rice
Rice is the seed of the monocot plants Oryza sativa or Oryza glaberrima . As a cereal grain, it is the most important staple food for a large part of the world's human population, especially in East Asia, Southeast Asia, South Asia, the Middle East, and the West Indies...
cooked together with one or more bean
Bean
Bean is a common name for large plant seeds of several genera of the family Fabaceae used for human food or animal feed....
s (and sometimes also other grains). Kongbap may be made from scratch by combining and cooking together dried rice and beans, although it is also commercially available premixed packages in dried form in grocery stores throughout Korea, as well as in Korean grocery stores in other nations.photo Although the exact mixture may vary, typical ingredients include short-grain brown rice, green pea
Pea
A pea is most commonly the small spherical seed or the seed-pod of the pod fruit Pisum sativum. Each pod contains several peas. Peapods are botanically a fruit, since they contain seeds developed from the ovary of a flower. However, peas are considered to be a vegetable in cooking...
s, azuki bean
Azuki bean
The is an annual vine, Vigna angularis, widely grown throughout East Asia and the Himalayas for its small bean. The cultivars most familiar in north-east Asia have a uniform red color, but white, black, gray and variously mottled varieties are also known. Scientists presume Vigna angularis var...
s, black soybean
Soybean
The soybean or soya bean is a species of legume native to East Asia, widely grown for its edible bean which has numerous uses...
s, Job's tears
Job's Tears
Job's Tears , Coixseed, Tear Grass, adlay, or adlai, is a tall grain-bearing tropical plant of the family Poaceae native to Southeast Asia but elsewhere cultivated in gardens as an annual. It has been naturalized in the southern United States and the New World tropics...
, black glutinous rice
Glutinous rice
Glutinous rice is a type of short-grained Asian rice that is especially sticky when cooked. It is called glutinous Glutinous rice (Oryza sativa var. glutinosa or Oryza glutinosa; also called sticky rice, sweet rice, waxy rice, botan rice, biroin chal, mochi rice, and pearl rice, and pulut) is a...
, barley
Barley
Barley is a major cereal grain, a member of the grass family. It serves as a major animal fodder, as a base malt for beer and certain distilled beverages, and as a component of various health foods...
, and sorghum
Sorghum bicolor
Sorghum bicolor, commonly called sorghum and also known as durra or jowari, is a grass species cultivated for its edible grain. Sorghum originated in northern Africa, and is now cultivated widely in tropical and subtropical regions. S. bicolor is typically an annual, but some cultivars are...
. Another typical mixture consists only of white rice and green peas.photo The dried kongbap mixture is generally soaked in water for several hours or overnight before cooking, in order to ease the softening process of the beans while cooking.

Although it is generally acknowledged as a healthful and nutritious food, kongbap was not universally enjoyed as it was associated with imprisonment
Imprisonment
Imprisonment is a legal term.The book Termes de la Ley contains the following definition:This passage was approved by Atkin and Duke LJJ in Meering v Grahame White Aviation Co....
. Kongbap had long been a staple of Korean prison food
Prison food
Prison food refers to the meals served to prisoners while incarcerated in correctional institutions. While some prisons prepare their own food, many use staff from on-site catering companies.-United States:...
. The Korean
Korean language
Korean is the official language of the country Korea, in both South and North. It is also one of the two official languages in the Yanbian Korean Autonomous Prefecture in People's Republic of China. There are about 78 million Korean speakers worldwide. In the 15th century, a national writing...
phrase kongbap meokda (콩밥 먹다; literally "to eat kongbap") translates colloquially
Colloquialism
A colloquialism is a word or phrase that is common in everyday, unconstrained conversation rather than in formal speech, academic writing, or paralinguistics. Dictionaries often display colloquial words and phrases with the abbreviation colloq. as an identifier...
as "to be imprisoned."

However with a recent health food trend in South Korea, the popularity of beans has risen and kongbap is more commonly eaten in Korean households than before. 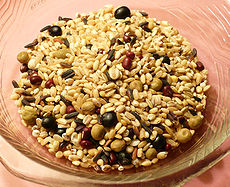