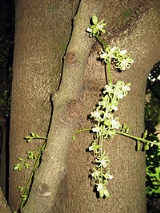 Encyclopedia
Kohekohe is a medium-sized tree native to New Zealand
New Zealand
New Zealand is an island country in the south-western Pacific Ocean comprising two main landmasses and numerous smaller islands. The country is situated some east of Australia across the Tasman Sea, and roughly south of the Pacific island nations of New Caledonia, Fiji, and Tonga...
. It is found in lowland and coastal forests throughout most of North Island
North Island
The North Island is one of the two main islands of New Zealand, separated from the much less populous South Island by Cook Strait. The island is in area, making it the world's 14th-largest island...
and also occurs in the Marlborough Sounds
Marlborough Sounds
The Marlborough Sounds are an extensive network of sea-drowned valleys created by a combination of land subsidence and rising sea levels at the north of the South Island of New Zealand...
in the north of the South Island
South Island
The South Island is the larger of the two major islands of New Zealand, the other being the more populous North Island. It is bordered to the north by Cook Strait, to the west by the Tasman Sea, to the south and east by the Pacific Ocean...
. Mature trees grow up to 15m in height, with a trunk up to a metre in diameter. Kohekohe forest used to be common in damp coastal and lowland areas in the North Island, but these forests have mostly disappeared because the land was used for settlement or they were browsed by possum
Possum
A possum is any of about 70 small to medium-sized arboreal marsupial species native to Australia, New Guinea, and Sulawesi .Possums are quadrupedal diprotodont marsupials with long tails...
s. A fairly close relative of true mahogany
Mahogany
The name mahogany is used when referring to numerous varieties of dark-colored hardwood. It is a native American word originally used for the wood of the species Swietenia mahagoni, known as West Indian or Cuban mahogany....
(Swietenia
Swietenia
Swietenia is a genus of trees in the chinaberry family, Meliaceae. It occurs natively in the Neotropics, from southern Florida, the Caribbean, Mexico and Central America south to Bolivia...
), it is also called New Zealand Mahogany. 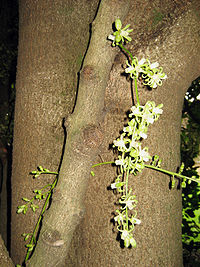 Kohekohe is notable for having characteristics normally associated with trees growing in the tropics, for example, it has white flowers which grow directly from the trunk or branches, and it has large, glossy, pinnate leaves up to 40mm in length. Kohekohe is sometimes known as New Zealand Mahogany, because its wood is light, strong and polishes to a fine red colour. 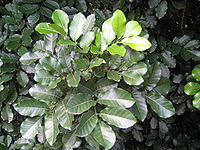 Māori boiled the bark in water and drank it as a tonic. The wood was used for building canoes but the wood is soft and not as durable as hardwoods and tends to rot quickly. It is valued for carving. Kohekohe was probably the dominant vegetation cover on Kapiti Island
Kapiti Island
-External links:* , Department of Conservation* * , Nature Coast Enterprise *...
before it was cleared in the early 19th century for cultivation and farming. The kohekohe forest on Kapiti is recovering after possums were eradicated in 1986.
The source of this article is wikipedia, the free encyclopedia.  The text of this article is licensed under the GFDL.