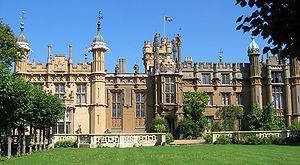 Knebworth House is a country house in the civil parish of Knebworth
Knebworth
Knebworth is a village and civil parish in the north of Hertfordshire, England immediately south of Stevenage. The civil parish covers an area between the villages of Datchworth, Woolmer Green, Codicote, Kimpton, Whitwell, St Paul's Walden and Langley, and encompasses the village of Knebworth, the...
in Hertfordshire
Hertfordshire
Hertfordshire is a ceremonial and non-metropolitan county in the East region of England. The county town is Hertford.The county is one of the Home Counties and lies inland, bordered by Greater London , Buckinghamshire , Bedfordshire , Cambridgeshire and...
, England
England
England is a country that is part of the United Kingdom. It shares land borders with Scotland to the north and Wales to the west; the Irish Sea is to the north west, the Celtic Sea to the south west, with the North Sea to the east and the English Channel to the south separating it from continental...
.

The home of the Lytton
Earl of Lytton
Earl of Lytton, in the County of Derby, is a title in the Peerage of the United Kingdom. It was created in 1880 for the diplomat and poet Robert Bulwer-Lytton, 2nd Baron Lytton. He was Viceroy of India from 1876 to 1880 and British Ambassador to France from 1887 to 1891...
family since 1490, when Thomas Bourchier sold the reversion of the manor to Sir Robert Lytton, Knebworth House was originally a genuine red-brick Late Gothic manor house
Manor house
A manor house is a country house that historically formed the administrative centre of a manor, the lowest unit of territorial organisation in the feudal system in Europe. The term is applied to country houses that belonged to the gentry and other grand stately homes...
, built round a central court as an open square. In 1813-16 the house was reduced to its west wing, which was remodelled in a Tudor Gothic style by John Biagio Rebecca for Mrs Bulwer-Lytton, and then was transformed in 1843-45 by Henry Edward Kendall, Jr. into the present Tudor Gothic structure. Its most famous resident was Edward Bulwer-Lytton, the Victorian
Victorian era
The Victorian era of British history was the period of Queen Victoria's reign from 20 June 1837 until her death on 22 January 1901. It was a long period of peace, prosperity, refined sensibilities and national self-confidence...
author, dramatist and statesman, who embellished the gardens in a formal Italianate fashion. Much of the interior was redesigned by Sir Edwin Lutyens
Edwin Lutyens
Sir Edwin Landseer Lutyens, OM, KCIE, PRA, FRIBA was a British architect who is known for imaginatively adapting traditional architectural styles to the requirements of his era...
, who simplified the main parterre
Parterre
A parterre is a formal garden construction on a level surface consisting of planting beds, edged in stone or tightly clipped hedging, and gravel paths arranged to form a pleasing, usually symmetrical pattern. Parterres need not have any flowers at all...
. A herb garden in an interlaced quincunx design was drawn by Gertrude Jekyll
Gertrude Jekyll
Gertrude Jekyll was an influential British garden designer, writer, and artist. She created over 400 gardens in the UK, Europe and the USA and contributed over 1,000 articles to Country Life, The Garden and other magazines.-Early life:...
in 1907 but not planted until 1982.

The house is open to the public together with its surrounding gardens and grounds. The grounds include an adventure playground, mini railway and dinosaur park and host various events including classic car rallies, the annual Salvo Fair of architectural salvage and, since 1974, major open air rock and pop concerts
Concerts at Knebworth House
The grounds of Knebworth House near the village of Knebworth in Hertfordshire, England has become a major venue for open air rock and pop concerts since 1974 when The Allman Brothers Band attracted 60,000 at the first large concert held at the venue....
.

It is currently the home of the UK leg of the touring rock festival Sonisphere, which in July 2009 occurred for the first time at Knebworth.

Numerous films have been shot at Knebworth, including: