Encyclopedia
Klamath National Forest is a 1737774 acre national forest
United States National Forest
National Forest is a classification of federal lands in the United States.National Forests are largely forest and woodland areas owned by the federal government and managed by the United States Forest Service, part of the United States Department of Agriculture. Land management of these areas...
, in the Klamath Mountains
Klamath Mountains
The Klamath Mountains, which include the Siskiyou, Marble, Scott, Trinity, Trinity Alps, Salmon, and northern Yolla-Bolly Mountains, are a rugged lightly populated mountain range in northwest California and southwest Oregon in the United States...
, located in Siskiyou County
Siskiyou County, California
Siskiyou County is a county located in the far northernmost part of the U.S. state of California, in the Shasta Cascade region on the Oregon border. Yreka is the county seat. Because of its substantial natural beauty, outdoor recreation opportunities, and Gold Rush era history, it is an important...
in northern California
California
California is a state located on the West Coast of the United States. It is by far the most populous U.S. state, and the third-largest by land area...
, but with a tiny extension (1.5 percent of the forest) into southern Jackson County
Jackson County, Oregon
-National protected areas:* Cascade–Siskiyou National Monument* Crater Lake National Park * Klamath National Forest * Rogue River-Siskiyou National Forest * Umpqua National Forest -Demographics:...
in Oregon
Oregon
Oregon is a state in the Pacific Northwest region of the United States. It is located on the Pacific coast, with Washington to the north, California to the south, Nevada on the southeast and Idaho to the east. The Columbia and Snake rivers delineate much of Oregon's northern and eastern...
. The forest contains continuous stands of ponderosa pine
Ponderosa Pine
Pinus ponderosa, commonly known as the Ponderosa Pine, Bull Pine, Blackjack Pine, or Western Yellow Pine, is a widespread and variable pine native to western North America. It was first described by David Douglas in 1826, from eastern Washington near present-day Spokane...
, Jeffrey pine
Jeffrey Pine
The Jeffrey Pine, Pinus jeffreyi, named in honor of its botanist documenter John Jeffrey, is a North American pine related to Ponderosa Pine.-Distribution and habitat:...
, Douglas fir, red fir
Red Fir
Abies magnifica, the Red Fir or Silvertip fir, is a western North American fir, native to the mountains of southwest Oregon and California in the United States. It is a high altitude tree, typically occurring at altitude, though only rarely reaching tree line...
, white fir
White Fir
White Fir is a fir native to the mountains of western North America, occurring at altitudes of 900-3,400 m. It is a medium to large evergreen coniferous tree growing to 25–60 m tall and with a trunk diameter of up to 2 m . It is popular as an ornamental landscaping tree and as a Christmas Tree...
and incense cedar. Old growth forest
Old growth forest
An old-growth forest is a forest that has attained great age , and thereby exhibits unique ecological features. An old growth forest has also usually reached a climax community...
is estimated to cover some 168000 acres (679.9 km²) of the forest land. Forest headquarters are located in Yreka, California
Yreka, California
Yreka is the county seat of Siskiyou County, California, United States. The population was 7,765 at the 2010 census, up from 7,290 at the 2000 census.- History:...
. There are local ranger
National Park Ranger
National Park Service Rangers are among the uniformed employees charged with protecting and preserving areas set aside in the National Park System by the United States Congress and/or the President of the United States...
district offices located in Fort Jones
Fort Jones, California
Fort Jones is a city in the Scott Valley area of Siskiyou County, California, United States. The population was 839 at the 2010 census, up from 600 as of the 2000 census.-History:...
, Happy Camp
Happy Camp, California
Happy Camp is a census-designated place in Siskiyou County, California in the United States. The population was 1,190 at the 2010 census....
, and Macdoel
Macdoel, California
Macdoel is a census-designated place in Siskiyou County, California, United States. As of the 2010 census, the CDP population was 133, down from 140 in at the 2000 census.-Geography:Macdoel is located at ....
, all in California. Klamath was established on May 6, 1905. 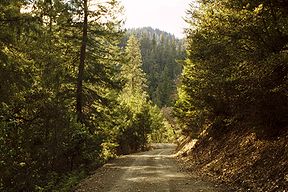