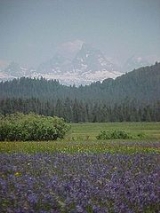 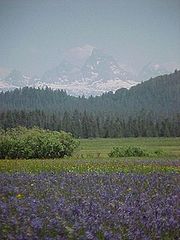 National Forests are largely forest
Forest
A forest, also referred to as a wood or the woods, is an area with a high density of trees. As with cities, depending where you are in the world, what is considered a forest may vary significantly in size and have various classification according to how and what of the forest is composed...
and woodland
Woodland
Ecologically, a woodland is a low-density forest forming open habitats with plenty of sunlight and limited shade. Woodlands may support an understory of shrubs and herbaceous plants including grasses. Woodland may form a transition to shrubland under drier conditions or during early stages of...
areas owned by the federal government
Federal government of the United States
The federal government of the United States is the national government of the constitutional republic of fifty states that is the United States of America. The federal government comprises three distinct branches of government: a legislative, an executive and a judiciary. These branches and...
and managed by the United States Forest Service
United States Forest Service
The United States Forest Service is an agency of the United States Department of Agriculture that administers the nation's 155 national forests and 20 national grasslands, which encompass...
, part of the United States Department of Agriculture
United States Department of Agriculture
The United States Department of Agriculture is the United States federal executive department responsible for developing and executing U.S. federal government policy on farming, agriculture, and food...
. Land management
Land management
Land management is the process of managing the use and development of land resources. Land resources are used for a variety of purposes which may include organic agriculture, reforestation, water resource management and eco-tourism projects.-See also:*Sustainable land management*Acreage...
of these areas focuses on timber harvesting, livestock
Livestock
Livestock refers to one or more domesticated animals raised in an agricultural setting to produce commodities such as food, fiber and labor. The term "livestock" as used in this article does not include poultry or farmed fish; however the inclusion of these, especially poultry, within the meaning...
grazing
Grazing
Grazing generally describes a type of feeding, in which a herbivore feeds on plants , and also on other multicellular autotrophs...
, water
Water
Water is a chemical substance with the chemical formula H2O. A water molecule contains one oxygen and two hydrogen atoms connected by covalent bonds. Water is a liquid at ambient conditions, but it often co-exists on Earth with its solid state, ice, and gaseous state . Water also exists in a...
, wildlife
Wildlife
Wildlife includes all non-domesticated plants, animals and other organisms. Domesticating wild plant and animal species for human benefit has occurred many times all over the planet, and has a major impact on the environment, both positive and negative....
, and recreation
Recreation
Recreation is an activity of leisure, leisure being discretionary time. The "need to do something for recreation" is an essential element of human biology and psychology. Recreational activities are often done for enjoyment, amusement, or pleasure and are considered to be "fun"...
. Unlike national parks and other federal lands managed by the National Park Service
National Park Service
The National Park Service is the U.S. federal agency that manages all national parks, many national monuments, and other conservation and historical properties with various title designations...
, commercial use of national forests is permitted, and in many cases encouraged. National Forests are categorized by the World Commission on Protected Areas
World Commission on Protected Areas
The World Commission on Protected Areas is one of six Commissions of the IUCN . WCPA is the world's premier network of protected area expertise...
as IUCN Category VI (Managed Resource Protected Area).

The National Forest System was created by the Land Revision Act of 1891
Land Revision Act of 1891
The U.S. Land Revision Act of 1891 gave the president the authority to "set aside and reserve...any part of the public lands wholly or partly covered with timber or undergrowth, whether of commercial value or not." However, it did not explicitly authorize the use or development of resources on the...
. It was the result of concerted action by Los Angeles
Los Ángeles
Los Ángeles is the capital of the province of Biobío, in the commune of the same name, in Region VIII , in the center-south of Chile. It is located between the Laja and Biobío rivers. The population is 123,445 inhabitants...
-area businessmen and property owners who were concerned by the harm being done to the watershed of the San Gabriel Mountains
San Gabriel Mountains
The San Gabriel Mountains Range is located in northern Los Angeles County and western San Bernardino County, California, United States. The mountain range lies between the Los Angeles Basin and the Mojave Desert, with Interstate 5 to the west and Interstate 15 to the east...
by ranchers and miners. Abbot Kinney
Abbot Kinney
Abbot Kinney was a developer and conservationist. Kinney is best known for his "Venice of America" development in Los Angeles.-Early life:...
and forester Theodore Lukens
Theodore Lukens
Theodore Parker Lukens was an American conservationist, real estate investor, civic leader, and forester who believed that burned over mountains could again be covered in timber which would protect watersheds. Lukens collected pine cones and seeds of different types and conducted experimental...
were key spokesmen for the effort.

There are conflicts between timber companies and environmentalists over the use of National Forest land. These conflicts center on endangered species
Endangered species
An endangered species is a population of organisms which is at risk of becoming extinct because it is either few in numbers, or threatened by changing environmental or predation parameters...
protection, logging of old-growth forests, intensive logging, undervalued stumpage
Stumpage
Stumpage is the price charged by a land owner to companies or operators for the right to harvest timber on that land. Stumpage used to be calculated on a "per stump" basis . It is now usually charged by tons, board feet or by cubic metres....
fees, mining laws and road-building in National Forests. Additional conflicts arise from concerns that the grasslands, shrublands, and forest understory are grazed by sheep, cattle, and, more recently, rising numbers of elk.

There are two distinctly different types of National Forests. Those east of the Great Plains
Great Plains
The Great Plains are a broad expanse of flat land, much of it covered in prairie, steppe and grassland, which lies west of the Mississippi River and east of the Rocky Mountains in the United States and Canada. This area covers parts of the U.S...
are primarily re-acquired or replanted forests; that is, the land had long been in the private domain but was purchased by the United States government in order to create new National Forests. In these cases, the areas of National Forest noted on most maps do not actually represent the extent of the National Forest, but only the extent of the authorized purchase zone. The actual amount of land acquired in most cases is much smaller. Those national forests west of the Great Plains are originally-owned forests. These are mostly lands reserved in the public domain by the U.S. government, and were never in private hands. In these cases, the areas of National Forests noted on maps are generally the true areas of the forest.

Many ski resort
Ski resort
A ski resort is a resort developed for skiing and other winter sports. In Europe a ski resort is a town or village in a ski area - a mountainous area, where there are ski trails and supporting services such as hotels and other accommodation, restaurants, equipment rental and a ski lift system...
s operate in National Forests.