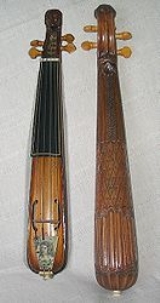 Who was the erson who made it?
More

Encyclopedia
The kit violin, dancing master's kit, or kit (Tanzmeistergeige in German), is a stringed
String instrument
A string instrument is a musical instrument that produces sound by means of vibrating strings. In the Hornbostel-Sachs scheme of musical instrument classification, used in organology, they are called chordophones...
musical instrument
Musical instrument
A musical instrument is a device created or adapted for the purpose of making musical sounds. In principle, any object that produces sound can serve as a musical instrument—it is through purpose that the object becomes a musical instrument. The history of musical instruments dates back to the...
. It is essentially a very small violin
Violin
The violin is a string instrument, usually with four strings tuned in perfect fifths. It is the smallest, highest-pitched member of the violin family of string instruments, which includes the viola and cello....
, designed to fit in a pocket — hence its other common name, the pochette (French for small pocket). It was used by dance
Dance
Dance is an art form that generally refers to movement of the body, usually rhythmic and to music, used as a form of expression, social interaction or presented in a spiritual or performance setting....
masters in royal courts and other places of nobility, as well as by street musicians up until around the 18th century. Occasionally, the rebec
Rebec
The rebecha is a bowed string musical instrument. In its most common form, it has a narrow boat-shaped body and 1-5 strings and is played on the arm or under the chin, like a violin.- Origins :The rebec dates back to the Middle Ages and was particularly popular in the 15th and 16th centuries...
was used in the same way. Several are called for (as violini piccoli alla francese - small French violins) in Monteverdi's 1607 Orfeo
Orfeo
L'Orfeo , sometimes called L'Orfeo, favola in musica, is an early Baroque opera by Claudio Monteverdi, with a libretto by Alessandro Striggio. It is based on the Greek legend of Orpheus, and tells the story of his descent to Hades and his fruitless attempt to bring his dead bride Eurydice back to...
.

The word "kit" likely arose from an abbreviation of the word "pocket" to "-cket" and subsequently "kit"; alternatively, it may be a corruption of “cittern
Cittern
The cittern or cither is a stringed instrument dating from the Renaissance. Modern scholars debate its exact history, but it is generally accepted that it is descended from the Medieval Citole, or Cytole. It looks much like the modern-day flat-back mandolin and the modern Irish bouzouki and cittern...
” (Gr. ). Trichet is said to have described the leather carrying case of the kit as a poche, hence, "The Pocket Violin". Similarly, Mersenne wrote that it was common practice among the kit violin's players (such as traveling minstrels or dance
Dance
Dance is an art form that generally refers to movement of the body, usually rhythmic and to music, used as a form of expression, social interaction or presented in a spiritual or performance setting....
teachers) to carry the violin in a pocket.
The term "kit" is believed to first have been used in the first quarter of the 16th century, in England
England
England is a country that is part of the United Kingdom. It shares land borders with Scotland to the north and Wales to the west; the Irish Sea is to the north west, the Celtic Sea to the south west, with the North Sea to the east and the English Channel to the south separating it from continental...
where it was mentioned in Interlude of the Four Elements, c. 1517.

The instrument's body is very small, but its fingerboard
Fingerboard
The fingerboard is a part of most stringed instruments. It is a thin, long strip of material, usually wood, that is laminated to the front of the neck of an instrument and above which the strings run...
is made long relative to the instrument's overall size in order to preserve as much of the instrument's melodic range as possible.

Many violinists in the eighteenth century used kits because of their portability. The pochette or pocket fiddle was used by dance masters not during the actual dances, although they could be used, but were used when teaching dance to students. Niel Gow
Niel Gow
Niel Gow was the most famous Scottish fiddler and dancie of the eighteenth century.-Biography:...
is known to have played a kit, and reportedly carried one in his pocket each time he walked from his house in Inver to Blair Castle, where he worked. Thomas Jefferson
Thomas Jefferson
Thomas Jefferson was the principal author of the United States Declaration of Independence and the Statute of Virginia for Religious Freedom , the third President of the United States and founder of the University of Virginia...
also owned at least two kits.

A common misconception is that kits were used for children. In fact, they were made for adults—their small size is so that they could be used in situations where a full-sized violin was too large to carry, or too expensive to own. The "pocket fiddle" or "pochette" should not be confused with a saddle fiddle, the latter being a proper fiddle or violin with a nearly full-sized finger board, and a violin body that is the same shape as a full-sized version.
The source of this article is wikipedia, the free encyclopedia.  The text of this article is licensed under the GFDL.