Encyclopedia
Kiowa National Grassland is a National Grassland located in New Mexico
New Mexico
New Mexico is a state located in the southwest and western regions of the United States. New Mexico is also usually considered one of the Mountain States. With a population density of 16 per square mile, New Mexico is the sixth-most sparsely inhabited U.S...
, USA. The Great Plains
Great Plains
The Great Plains are a broad expanse of flat land, much of it covered in prairie, steppe and grassland, which lies west of the Mississippi River and east of the Rocky Mountains in the United States and Canada. This area covers parts of the U.S...
grassland
Grassland
Grasslands are areas where the vegetation is dominated by grasses and other herbaceous plants . However, sedge and rush families can also be found. Grasslands occur naturally on all continents except Antarctica...
includes prairie
Prairie
Prairies are considered part of the temperate grasslands, savannas, and shrublands biome by ecologists, based on similar temperate climates, moderate rainfall, and grasses, herbs, and shrubs, rather than trees, as the dominant vegetation type...
and part of the Canadian River
Canadian River
The Canadian River is the longest tributary of the Arkansas River. It is about long, starting in Colorado and traveling through New Mexico, the Texas Panhandle, and most of Oklahoma....
Canyon.

The community of Mills
Mills, New Mexico
Mills is an unincorporated community in Harding County, New Mexico, founded in 1888. It lies on NM 39 eleven miles north of Roy. Mills lies within the Kiowa National Grassland. The post office there opened in 1889, was closed from 1901 to 1908, and has been open since.-History:Mills was named...
lies within the western unit of the Kiowa National Grassland. Clayton
Clayton, New Mexico
Clayton is a town in Union County, New Mexico, United States. The population was 2,524 at the 2000 census. It is the county seat of Union County. Tourists heading from Texas to Colorado often pass through Clayton, which is located in the northeast corner of New Mexico.Clayton is named for a son of...
is the nearest town to the eastern unit of the Grassland. 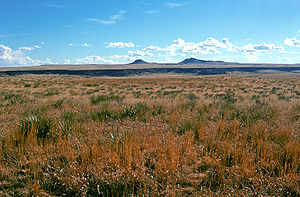 Both units of the National Grassland consist of a patchwork quilt of public land interspaced with private land. Elevations on the Grassland range from 4,500 to 6,300 which is high enough to moderate somewhat the summer temperatures of the Great Plains
Great Plains
The Great Plains are a broad expanse of flat land, much of it covered in prairie, steppe and grassland, which lies west of the Mississippi River and east of the Rocky Mountains in the United States and Canada. This area covers parts of the U.S...
. The average high and low temperatures for Clayton in July are 87 and 60 degrees (31 and 16 C) and January highs and lows are 47 and 20 (8 and -7C). Annual precipitation is about 15 inches (381 mm) throughout the Grassland with July and August the wettest months and January and February the driest.

Semi-arid steppe
Steppe
In physical geography, steppe is an ecoregion, in the montane grasslands and shrublands and temperate grasslands, savannas, and shrublands biomes, characterized by grassland plains without trees apart from those near rivers and lakes...
grassland (shortgrass prairie) is the most common vegetation, covering 79 percent of the Grassland (including the adjacent Rita Blanca National Grassland
Rita Blanca National Grassland
Rita Blanca National Grassland is a National Grassland located in northern Dallam County, Texas, in the Texas Panhandle, and in southern Cimarron County, Oklahoma, in the western Oklahoma Panhandle, USA. It is not one solid block of government owned land but rather several small blocks of...
). Ten percent of the land is covered with Pinyon – Juniper
Juniper
Junipers are coniferous plants in the genus Juniperus of the cypress family Cupressaceae. Depending on taxonomic viewpoint, there are between 50-67 species of juniper, widely distributed throughout the northern hemisphere, from the Arctic, south to tropical Africa in the Old World, and to the...
woodland, almost entirely in the western sector. A few stands of Ponderosa Pine
Ponderosa Pine
Pinus ponderosa, commonly known as the Ponderosa Pine, Bull Pine, Blackjack Pine, or Western Yellow Pine, is a widespread and variable pine native to western North America. It was first described by David Douglas in 1826, from eastern Washington near present-day Spokane...
are found in the Canadian River Canyon in the western sector. Nine percent of vegetative cover is Sand Sagebrush
Sagebrush (plant)
Sagebrush is the common name for Artemisia tridentata and a number of other species of shrubby plants in the genus Artemisia, native to the North American west and other parts of the world. It is sometimes confused with sage plants ....
and one percent is Cottonwood and Willow
Willow
Willows, sallows, and osiers form the genus Salix, around 400 species of deciduous trees and shrubs, found primarily on moist soils in cold and temperate regions of the Northern Hemisphere...
riparian forest. The Canadian River is the only permanent stream. Playa lakes
Dry lake
Dry lakes are ephemeral lakebeds, or a remnant of an endorheic lake. Such flats consist of fine-grained sediments infused with alkali salts. Dry lakes are also referred to as alkali flats, sabkhas, playas or mud flats...
(shallow lakes which hold rainwater part of the year) are commonly found.
Nearly all of the land in the Kiowa National Grassland is leased to ranchers for grazing cattle which is the main economic activity in the region.

Eastern Unit. Twenty-two miles northeast of Clayton is McNees Crossing, a reliable source of water on the Santa Fe Trail
Santa Fe Trail
The Santa Fe Trail was a 19th-century transportation route through central North America that connected Missouri with Santa Fe, New Mexico. Pioneered in 1822 by William Becknell, it served as a vital commercial and military highway until the introduction of the railroad to Santa Fe in 1880...
. Iin 1828, two young traders, Robert McNees and Daniel Munro, were killed here by Indians. In 1831, the first celebration in New Mexico of Independence Day took place at McNees Crossing. Although on private property, a short trail leads to the crossing of Corrumpa Creek and a historical marker. Seventeen miles north of Clayton is a three mile section of the Santa Fe Trail which is open for walking and horseback riding. The trail is marked by rock posts. The ruts of wagons which passed this way in the nineteenth century are still present.

Western Unit. The rim of the Canadian River Canyon, also called Mills Canyon, is six miles west of the nearly-deserted community of Mills. About 15 miles of the red-rock, well-vegetated canyon are in the National Grassland. The canyon is seven hundred feet (210 mts) deep and more than one mile (2 km) wide from rim to rim. A primitive campground is on the rim. A road down into the canyon is traversable by foot, horseback, or high-clearance vehicles. On the canyon floor are the ruins of the homestead of Melvin Mills who had an apple orchard and a home here in the early 1900s. The area is rich in wildlife including introduced Barbary Sheep
Barbary sheep
The Barbary Sheep is a species of caprid native to rocky mountains in North Africa. Six subspecies have been described. Although it is rare in its native North Africa, it has been introduced to North America, southern Europe and elsewhere...
which flourish among the cliffs. The Canadian River has a variety of sport fishes including Largemouth Bass
Largemouth bass
The largemouth bass is a species of black bass in the sunfish family native to North America . It is also known as widemouth bass, bigmouth, black bass, bucketmouth, Potter's fish, Florida bass, Florida largemouth, green bass, green trout, linesides, Oswego bass, southern largemouth...
and Channel Catfish
Channel catfish
Channel catfish, Ictalurus punctatus, is North America's most numerous catfish species. It is the official fish of Missouri, Iowa, Nebraska, Kansas, and Tennessee, and is informally referred to as a "channel cat". In the United States they are the most fished catfish species with approximately 8...
.

A Wilderness Area encompassing 6032 acres (2,441.1 ha) was proposed in 2008 for the Cimarron River Canyon. The proposal would preserve the pristine state of about eight miles of the canyon. Fishing, hunting, and non-motorized travel would be permitted in the wilderness area.