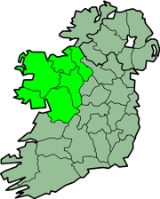 Encyclopedia
The Kings of Connacht were rulers of the cóiced (variously translated as portion, fifth, province) of Connacht
Connacht
Connacht , formerly anglicised as Connaught, is one of the Provinces of Ireland situated in the west of Ireland. In Ancient Ireland, it was one of the fifths ruled by a "king of over-kings" . Following the Norman invasion of Ireland, the ancient kingdoms were shired into a number of counties for...
, which lies west of the River Shannon
River Shannon
The River Shannon is the longest river in Ireland at . It divides the west of Ireland from the east and south . County Clare, being west of the Shannon but part of the province of Munster, is the major exception...
, Ireland
Ireland
Ireland is an island to the northwest of continental Europe. It is the third-largest island in Europe and the twentieth-largest island on Earth...
. However, the name only became applied to it in the early medieval era, being named after The Connachta.

The old name for the province was Cóiced Ol nEchmacht
Cóiced Ol nEchmacht
-Etymology and extent:Cóiced Ol nEchmacht may be translated as the portion/fifth/province of the Ol nEchmacht, also called the Fir Ol nEchmacht . They were divided up into three main tribes: the Fir Craibe, or Fir na Criabe; the Tuatha Taiden; the Gamanraige...
(the fifth of the Ol nEchmacht). Ptolemy
Ptolemy
Claudius Ptolemy , was a Roman citizen of Egypt who wrote in Greek. He was a mathematician, astronomer, geographer, astrologer, and poet of a single epigram in the Greek Anthology. He lived in Egypt under Roman rule, and is believed to have been born in the town of Ptolemais Hermiou in the...
's map of c. 150 AD. does in fact list a people called the Nagnatae
Nagnatae
The Nagnatae or Magnatae were a people of ancient Ireland, recorded in Ptolemy's 2nd century Geography as living in northern Connacht. Ptolemy also records a town, Nagnata or Magnata , in their territory, between the mouths of the rivers Ravius , thought to be the Roe, and Libnius , thought to...
as living in the west of Ireland. Some are of the opinion that Ptolemy's Map of Ireland may be based on cartography carried out as much as five hundred years before his time.

The Connachta were a group of dynasties who claimed descent from the three eldest sons of Eochaid Mugmedon
Eochaid Mugmedon
-Biography:According to medieval Irish legend and historical tradition, Eochaid was a High King of Ireland, best known as the father of Niall of the Nine Hostages and ancestor of the Uí Néill and Connachta dynasties...
: Brion
Brion (Irish)
Brión , son of Eochaid Mugmedón, was a legendary and possibly historical Irish king, fl. 4th/5th century.-Biography:The older half-brother of Niall of the Nine Hostages and one of the three brothers whose descendants were known as the Connachta, Brión is said to have been king of Connacht....
, Ailill
Ailill
Ailill a popular male given name in medieval Ireland and may refer to:* Ailill mac Máta, legendary king of Connacht and husband of queen Medb* Ailill mac Slanuill, legendary High King of Ireland of the 12th century BC...
and Fiachrae
Fiachrae
Fiachrae was an Irish prince, the son of the high king Eochaid Mugmedón by his wife Mongfind, sister of Crimthann mac Fidaig. He was ancestor of the Uí Fiachrach dynasties of Connacht. He lived in the late 4th century....
. They took their collective name from their alleged descent from Conn Cétchathach
Conn of the Hundred Battles
Conn Cétchathach , son of Fedlimid Rechtmar, was, according to medieval Irish legend and historical tradition, a High King of Ireland, and the ancestor of the Connachta, and, through his descendant Niall Noígiallach, the Uí Néill dynasties, which dominated Ireland in the early middle ages, and...
. Their younger brother, Niall Noigiallach was ancestor to the Uí Néill
Uí Néill
The Uí Néill are Irish and Scottish dynasties who claim descent from Niall Noigiallach , an historical King of Tara who died about 405....
.

The following is a list of kings of Connacht from the fifth to fifteenth centuries. Biographical details will follow.