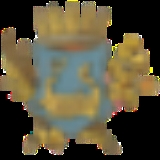 Encyclopedia
The Kingdom of Illyria was an administrative unit of the Austrian Empire
Austrian Empire
The Austrian Empire was a modern era successor empire, which was centered on what is today's Austria and which officially lasted from 1804 to 1867. It was followed by the Empire of Austria-Hungary, whose proclamation was a diplomatic move that elevated Hungary's status within the Austrian Empire...
from 1816 to 1849. Its administrative centre was Ljubljana
Ljubljana
Ljubljana is the capital of Slovenia and its largest city. It is the centre of the City Municipality of Ljubljana. It is located in the centre of the country in the Ljubljana Basin, and is a mid-sized city of some 270,000 inhabitants...
and it included the western and central part of present-day Slovenia
Slovenia
Slovenia , officially the Republic of Slovenia , is a country in Central and Southeastern Europe touching the Alps and bordering the Mediterranean. Slovenia borders Italy to the west, Croatia to the south and east, Hungary to the northeast, and Austria to the north, and also has a small portion of...
, the present Austria
Austria
Austria , officially the Republic of Austria , is a landlocked country of roughly 8.4 million people in Central Europe. It is bordered by the Czech Republic and Germany to the north, Slovakia and Hungary to the east, Slovenia and Italy to the south, and Switzerland and Liechtenstein to the...
n state of Carinthia
Carinthia (state)
Carinthia is the southernmost Austrian state or Land. Situated within the Eastern Alps it is chiefly noted for its mountains and lakes.The main language is German. Its regional dialects belong to the Southern Austro-Bavarian group...
, as well as some territories in north-western Croatia
Croatia
Croatia , officially the Republic of Croatia , is a unitary democratic parliamentary republic in Europe at the crossroads of the Mitteleuropa, the Balkans, and the Mediterranean. Its capital and largest city is Zagreb. The country is divided into 20 counties and the city of Zagreb. Croatia covers ...
(Istria
Istria
Istria , formerly Histria , is the largest peninsula in the Adriatic Sea. The peninsula is located at the head of the Adriatic between the Gulf of Trieste and the Bay of Kvarner...
and Kvarner Gulf
Kvarner Gulf
The Kvarner Gulf ); sometimes also Kvarner Bay, in Italian Quarnaro or Carnaro) is a bay in the northern Adriatic Sea, located between the Istrian peninsula and the northern Croatian seacoast....
islands) and north-eastern Italy
Italy
Italy , officially the Italian Republic languages]] under the European Charter for Regional or Minority Languages. In each of these, Italy's official name is as follows:;;;;;;;;), is a unitary parliamentary republic in South-Central Europe. To the north it borders France, Switzerland, Austria and...
(namely the Provinces of Trieste
Province of Trieste
The Province of Trieste is a province in the autonomous Friuli-Venezia Giulia region of Italy. Its capital is the city of Trieste.It has an area of 212 km², and a total population of 236,520...
and Gorizia
Province of Gorizia
The Province of Gorizia is a province in the autonomous Friuli–Venezia Giulia region of Italy.-Overview:Its capital is the city of Gorizia. It belonged to the Province of Udine between 1924 and 1927 and the communes of Sonzia, Plezzo, Bergogna, Caporetto, Tolmino, Circhina, Santa Lucia d'Isonzo,...
).

The Kingdom of Illyria was formed after the end of the Napoleonic wars
Napoleonic Wars
The Napoleonic Wars were a series of wars declared against Napoleon's French Empire by opposing coalitions that ran from 1803 to 1815. As a continuation of the wars sparked by the French Revolution of 1789, they revolutionised European armies and played out on an unprecedented scale, mainly due to...
, when the territory of the former Illyrian Provinces
Illyrian provinces
The Illyrian Provinces was an autonomous province of the Napoleonic French Empire on the north and east coasts of the Adriatic Sea between 1809 and 1816. Its capital was established at Laybach...
which had belonged to the First French Empire
First French Empire
The First French Empire , also known as the Greater French Empire or Napoleonic Empire, was the empire of Napoleon I of France...
between 1809 and 1813, were again incorporated in the Austrian Empire
Austrian Empire
The Austrian Empire was a modern era successor empire, which was centered on what is today's Austria and which officially lasted from 1804 to 1867. It was followed by the Empire of Austria-Hungary, whose proclamation was a diplomatic move that elevated Hungary's status within the Austrian Empire...
. The legal and administrative reforms made by the French authorities deeply transformed the administrative structures of these territories, so the Austrian Imperial authorities thought it better to group most of them as a separate administrative entity, enabling a slow incorporation into the Austrian legal, judicial and administrative system.

The Kingdom of Illyria was officially established in 1816. In the first years, it comprised territory both in the Slovene Lands
Slovene Lands
Slovene Lands or Slovenian Lands is the historical denomination for the whole of the Slovene-inhabited territories in Central Europe. It more or less corresponds to modern Slovenia and the adjacent territories in Italy, Austria and Hungary in which autochthonous Slovene minorities live.-...
and of the Kingdom of Croatia
Kingdom of Croatia (Habsburg)
The Kingdom of Croatia was an administrative division that existed between 1527 and 1868 within the Habsburg Monarchy . The Kingdom was a part of the Lands of the Crown of St. Stephen, but was subject to direct Imperial Austrian rule for significant periods of time, including its final years...
. Already in the early 1820s, however, the pre-Napoleonic Kingdom of Croatia and Slavonia was again established, in which also the territories forming part of the Kingdom of Illyria were included. Thus from the 1820s on, the Kingdom of Illyria only included the following traditional provinces: the Duchy of Carinthia
Duchy of Carinthia
The Duchy of Carinthia was a duchy located in southern Austria and parts of northern Slovenia. It was separated from the Duchy of Bavaria in 976, then the first newly created Imperial State beside the original German stem duchies....
, the Duchy of Carniola
Duchy of Carniola
The Duchy of Carniola was an administrative unit of the Holy Roman Empire and the Habsburg Monarchy from 1364 to 1918. Its capital was Ljubljana...
, as well as the Princely County of Gorizia and Gradisca
Gorizia and Gradisca
The County of Gorizia and Gradisca was a Habsburg county in Central Europe, in what is now a multilingual border area of Italy and Slovenia. It was named for its two major urban centers, Gorizia and Gradisca d'Isonzo.-Province of the Habsburg Empire:...
, the City of Trieste
Trieste
Trieste is a city and seaport in northeastern Italy. It is situated towards the end of a narrow strip of land lying between the Adriatic Sea and Italy's border with Slovenia, which lies almost immediately south and east of the city...
and the March of Istria
Istria
Istria , formerly Histria , is the largest peninsula in the Adriatic Sea. The peninsula is located at the head of the Adriatic between the Gulf of Trieste and the Bay of Kvarner...
. 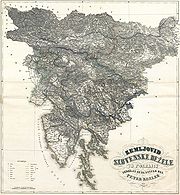 In the Spring of Nations in 1848, Slovenes advanced a proposal to include Lower Styria
Lower Styria
Lower Styria or Slovenian Styria is a traditional region in northeastern Slovenia, comprising the southern third of the former Duchy of Styria. The population of Lower Styria in its historical boundaries amounts to around 705,000 inhabitants, or 34.5% of the population of Slovenia...
in the Kingdom of Illyria, so most of the Slovene Lands would be united in a single administrative entity and the idea of an United Slovenia
United Slovenia
United Slovenia is the name of an unrealized political programme of the Slovene national movement, formulated during the Spring of Nations in 1848...
would thus be achieved. Peter Kozler
Peter Kozler
Peter Kozler or Kosler was a Slovene lawyer, geographer, cartographer, activist and manufacturer...
designed a map of such an enlarged Kingdom of Illyria, which would later become an important national symbol in the Slovenian national awakening. The proposal was, however, rejected by the Habsburg emperor. In 1849 the Kingdom of Illyria ceased to exist as a separate administrative entity and the old crown territories of Carinthia, Carniola and Gorizia (with Trieste and Istria forming the Austrian Littoral
Austrian Littoral
The Austrian Littoral was established as a crown land of the Austrian Empire in 1849. In 1861 it was divided into the three crown lands of the Imperial Free City of Trieste and its suburbs, the Margraviate of Istria, and the Princely County of Gorizia and Gradisca, which each had separate...
) were again re-established. This division lasted until 1918.