Encyclopedia
Kifissia or Kifisia is one of the most expensive northern suburbs of Athens
Athens
Athens , is the capital and largest city of Greece. Athens dominates the Attica region and is one of the world's oldest cities, as its recorded history spans around 3,400 years. Classical Athens was a powerful city-state...
, mainly accessed via Kifissias Avenue
Kifissias Avenue
Kifissias Avenue is one of the longest avenues in the Greater Athens area. Its total length is about 20 km, beginning 4 km northeast of downtown Athens and ending by the municipal boundary of Nea Erythraia north of Kifissia...
, running all the way from central Athens up to Theseos Avenue in the suburb of Nea Erythraia
Nea Erythraia
Nea Erythraia , is a suburb in the northeastern part of Athens, Greece. Since the 2011 local government reform it is part of the municipality Kifisia, of which it is a municipal unit....
. It has traditionally been home to the major Greek political families
Politics of Greece
The Politics of Greece takes place in a large parliamentary representative democratic republic, whereby the Prime Minister of Greece is the head of government, and of a multi-party system. Legislative power is vested in both the government and the Hellenic Parliament...
. It is home to ISAP
ISAP
I.S.A.P. is the acronym for the Athens-Piraeus Electric Railways , the oldest urban rapid transit system of Athens metropolitan area in Greece. It is the second-oldest underground metro system in the world, after the Metropolitan Railway, of 1863, now a part of the London Underground...
's terminal station
Kifissia station
The Kifissia or Kifisia station, is an ISAP train station in Kifissia, Greece and is also the northermost station. The station is situated several kilometres north of Athens and is marked at the 25.655 km from the starting point in Piraeus...
, presently a part of the Athens Metro
Athens Metro
The Athens Metro is an underground rapid transit system serving Athens, the capital city of Greece. It was constructed and owned by Attiko Metro S.A. and operated until 2011 by Attiko Metro Etaireia Leitourgias S.A....
project. The Cephissus
Cephissus (Athenian plain)
Cephissus , Kifissós) or Cephisus Kifisos), a river flowing through the Athenian plain.In his summary of Greek mythology Apollodorus declares that Erechtheus' wife Praxithea was daughter of Phrasimus by Diogenia daughter of Cephissus.This river is found in the western part of the...
river runs to the west of Kifissia and has his name derived from Kifissia, and half of the municipality is taken up by part of the Penteli
Penteli
Pentéli or Pendeli, , and Vrilissos or Vrilittos , Mendeli in medieval times) is a tall mountain and mountain range situated northeast of Athens and southwest of Marathon. Its elevation is 1,109 m...
mountain; the rest is made up of elegant urban areas to the west, surrounded by popular and upmarket areas such as Kefallari and Politeia
Politeia
Politeia is an Ancient Greek word with no single English translation. Derived from the word polis , it is an important term in Ancient Greek political thought, especially that of Plato and Aristotle....
to the north, and Nea Kiffisia to the south-west. Kifissia is a famous recreational neighbourhood for people of all ages (but mostly teenagers) from all over Athens, because of its many available forms of entertainment; the Cinemax Cinemas, the Kifissia Bowling Center, numerous more fashionable shopping malls, as well as many smaller designer shops and upmarket restaurants, bars and nightclubs. It is also home to the Kefalari Park, the most popular place for younger groups to socialize.

The municipality Kifissia was formed at the 2011 local government reform by the merger of the following 3 former municipalities, that became municipal units:

Kifissia, as Cephissia, dates back to ancient times, along with the ancient municipality of Epicephesia. It was the home of the famous dramatist Menander
Menander
Menander , Greek dramatist, the best-known representative of Athenian New Comedy, was the son of well-to-do parents; his father Diopeithes is identified by some with the Athenian general and governor of the Thracian Chersonese known from the speech of Demosthenes De Chersoneso...
(circa 342-291 BC).
Kifissia had become a famous retreat of philosophers during the reign of the Roman emperor Hadrian
Hadrian
Hadrian , was Roman Emperor from 117 to 138. He is best known for building Hadrian's Wall, which marked the northern limit of Roman Britain. In Rome, he re-built the Pantheon and constructed the Temple of Venus and Roma. In addition to being emperor, Hadrian was a humanist and was philhellene in...
, when the wealthy Herodes Atticus
Herodes Atticus
Lucius Vibullius Hipparchus Tiberius Claudius Atticus Herodes, otherwise known as Herodes Atticus was a very distinguished, rich Greek aristocrat who served as a Roman Senator and a Sophist. He is notable as a proponent in the Second Sophistic by Philostratus.-Ancestry and Family:Herodes Atticus...
of Marathon, Greece
Marathon, Greece
Marathon is a town in Greece, the site of the battle of Marathon in 490 BC, in which the heavily outnumbered Athenian army defeated the Persians. The tumulus or burial mound for the 192 Athenian dead that was erected near the battlefield remains a feature of the coastal plain...
built the Villa Kifissia. In his Attic Nights, Aulius Gellius describes the unique ambiance of intellectual ferment and aristocratic leisure in an idyllic setting which he created there. It was also the practice of Herodes to provide free instruction in philosophy for selected youths from Athens
Athens
Athens , is the capital and largest city of Greece. Athens dominates the Attica region and is one of the world's oldest cities, as its recorded history spans around 3,400 years. Classical Athens was a powerful city-state...
.
The remains of the some of his family funeral monuments lie at the centre of the town in Platonas Square. He also beautified a sanctuary to the Nymph
Nymph
A nymph in Greek mythology is a female minor nature deity typically associated with a particular location or landform. Different from gods, nymphs are generally regarded as divine spirits who animate nature, and are usually depicted as beautiful, young nubile maidens who love to dance and sing;...
s in the ravine of Kokkinara, in the nearby district of Kefalari.

The history of Kifissia during the medieval period is obscure, but the remains of a monastery church dedicated to the Virgin of the Swallow
Swallow
The swallows and martins are a group of passerine birds in the family Hirundinidae which are characterised by their adaptation to aerial feeding...
(Panaghia Chelidonas)is associated with a story about a battle fought there between local people and unspecified "invaders". This chapel is a rare example of a monastery church originally provided with a fireplace, for the chimney remains. 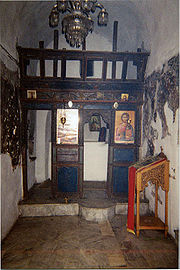 During Ottoman period, in 1667, Kifissia was visited by the Turkish traveler Evliya Tchelebi. He described a small country town set in a fertile plain of paradisaic beauty, with three hundred tile-roofed houses. Half the inhabitants of the town were Muslims and half were Christian. He records that there was a single mosque, without a minaret, and many small Christian chapels - some of which survive today.

The temperature in Kifissia tends to be significantly lower than that of the city, so following the independence of Greece, it quickly became a summer resort of the ruling class of the new state.

Its popularity faded somewhat during the middle of the Nineteenth Century when the danger of raids by brigands who infested the nearby mountains was very real. However, the suppression of brigandage, and the arrival of the railway in 1885, led to the dramatic development of the area.

It became the fashion for wealthy Athenian families to build summer houses in Kifissia, and keen social competition led to the creation of a unique architectural ambiance, as villas in ever more exotic styles proliferated. For those unable to afford a summer house, many hotels were built, where the slightly less affluent could spend the holiday months rubbing shoulders with their social betters.

The heyday of Kifissia was probably during the inter-war period, when the leaders of the two main rival political parties frequented different hotels in the town together with their most important supporters.

Following the liberation of Greece from German occupation in 1944, the British Royal Air Force
Royal Air Force
The Royal Air Force is the aerial warfare service branch of the British Armed Forces. Formed on 1 April 1918, it is the oldest independent air force in the world...
ill-advisedly made its headquarters in Kefalari, taking over several hotels. With the outbreak of the Greek Civil War
Greek Civil War
The Greek Civil War was fought from 1946 to 1949 between the Greek governmental army, backed by the United Kingdom and United States, and the Democratic Army of Greece , the military branch of the Greek Communist Party , backed by Bulgaria, Yugoslavia and Albania...
, the RAF personnel were first besieged, then forced to surrender, and marched across the mountains into northern Greece; being released in Trikala
Trikala
Trikala is a city in northwestern Thessaly, Greece. It is the capital of the Trikala peripheral unit, and is located NW of Athens, NW, of Karditsa, E of Ioannina and Metsovo, S of Grevena, SW of Thessaloniki, and W of Larissa...
only after a truce had been arranged.

Today, Kifissia is an upmarket shopping centre, although many villas have been preserved.

In July 2007, residents panicked as Kifissia was struck by a bush fire the origins of which are said to be arson
Arson
Arson is the crime of intentionally or maliciously setting fire to structures or wildland areas. It may be distinguished from other causes such as spontaneous combustion and natural wildfires...
related. The fire destroyed much of the eastern, partially forested parts of the area. It several houses and buildings that had been built near the forest boundaries but did not cause as much damage as the fire in the Penteli
Penteli
Pentéli or Pendeli, , and Vrilissos or Vrilittos , Mendeli in medieval times) is a tall mountain and mountain range situated northeast of Athens and southwest of Marathon. Its elevation is 1,109 m...
region. The fire lasted several hours, finally being put out at about midnight. Firefighters made use of helicopters as well as airplanes to battle the blaze.