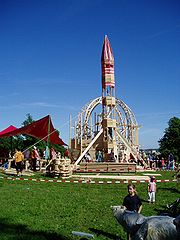 Kiel Week is an annual sailing event in Kiel
Kiel
Kiel is the capital and most populous city in the northern German state of Schleswig-Holstein, with a population of 238,049 .Kiel is approximately north of Hamburg. Due to its geographic location in the north of Germany, the southeast of the Jutland peninsula, and the southwestern shore of the...
, Germany
Germany
Germany , officially the Federal Republic of Germany , is a federal parliamentary republic in Europe. The country consists of 16 states while the capital and largest city is Berlin. Germany covers an area of 357,021 km2 and has a largely temperate seasonal climate...
. It is the largest sailing event in the world, and also one of the largest Volksfest
Volksfest
A Volksfest is a large event in Germany which combines a festival and a carnival. Admission to a Volksfest is free however you have to pay for each ride separately....
in Europe.

Kiel Week is held annually in the last complete week in June, and opens officially on the preceding Saturday with the official Glasen, followed by the Holstenbummel. The "Soundcheck" is on the Friday before the official opening; it is a music festival across all the stages within the city. Kiel Week ends with a large fireworks display at 11 p.m. on Sunday, fired from pontoons or the quays at the Howaldtswerke
Howaldtswerke
Howaldtswerke-Deutsche Werft is a German shipbuilding company, headquartered in Kiel. In 2009 it was the largest shipyard in Germany and has more than 2,400 employees. It has been part of ThyssenKrupp Marine Systems owned by ThyssenKrupp, since 2005...
, visible all across the Bay of Kiel
Bay of Kiel
The Bay of Kiel is a bay in the southwestern Baltic Sea, off the shores of Schleswig-Holstein in Germany and the islands of Denmark. It is connected with the Bay of Mecklenburg in the east, the Little Belt in the northwest, and the Great Belt in the North....
.

Most ship races begin at the Olympic harbor of Schilksee, also the center of most sporting activities during Kiel Week. Other good places to view sailing races of smaller ship types are along the Kiellinie at the west coast of the Bay of Kiel
Bay of Kiel
The Bay of Kiel is a bay in the southwestern Baltic Sea, off the shores of Schleswig-Holstein in Germany and the islands of Denmark. It is connected with the Bay of Mecklenburg in the east, the Little Belt in the northwest, and the Great Belt in the North....
.

While Kiel Week started out as a ship racing championship, it has long since become a large festival with many popular bands playing on public stages. They often play for free, although the corporate sponsors (many from the Schleswig-Holstein
Schleswig-Holstein
Schleswig-Holstein is the northernmost of the sixteen states of Germany, comprising most of the historical duchy of Holstein and the southern part of the former Duchy of Schleswig...
media and telecommunications industry) usually display their involvement prominently. Most of the stages can be found at the Kiellinie (the western side of the Kieler Förde from the Düsternbrook yacht harbor past the Schleswig-Holstein parliament building to the big inner city ferry harbor), and as of late, across the Hoernbridge
Hörn Bridge
The Hörn Bridge is a folding bridge in the city of Kiel in the German state of Schleswig-Holstein. The bridge spans over the end of the Kiel Fjord and was designed by Gerkan, Marg and Partners.-Design and construction:...
to the Germania harbor and the Hörn. Another area of rich cultural activity is the city center (Rathausplatz, Holstenbrücke) and the area connecting the city center with the ferry harbor (Alter Markt, Dänische Straße, Schloßpark). Between the public stages and especially on the International Market on the Rathausplatz, food specialties from different countries can be eaten. Small street performances and street comedy are performed in many places. A special children's program is available at the Spiellinie.

Another special event is the Tall Ships Parade, often led by the Gorch Fock
Gorch Fock (1958)
The Gorch Fock is a tall ship of the German Navy . She is the second ship of that name and a sister ship of the Gorch Fock built in 1933. Both ships are named in honor of the German writer Johann Kinau who wrote under the pseudonym "Gorch Fock" and died in the battle of Jutland/Skagerrak in 1916...
, with more than 100 tall ships and traditional sailing ships and hundreds of yachts. The Tall Ships Parade is usually in the morning of the closing Sunday of Kiel Week. Gorch Fock is a sister ship to the USCGC Eagle (WIX-327)
USCGC Eagle (WIX-327)
The is a barque used as a training cutter for future officers of the United States Coast Guard. She is one of only two active commissioned sailing vessels in American military service, the other being the USS Constitution....
.