Encyclopedia
Khamsin, khamseen, chamsin or hamsin (Arabic: خمسين khamsīn, "fifty"), also known as khamaseen (Arabic: خماسين khamāsīn, "fifties") refers to a dry, hot and dusty local wind blowing in North Africa
North Africa
North Africa or Northern Africa is the northernmost region of the African continent, linked by the Sahara to Sub-Saharan Africa. Geopolitically, the United Nations definition of Northern Africa includes eight countries or territories; Algeria, Egypt, Libya, Morocco, South Sudan, Sudan, Tunisia, and...
and the Arabian Peninsula
Arabian Peninsula
The Arabian Peninsula is a land mass situated north-east of Africa. Also known as Arabia or the Arabian subcontinent, it is the world's largest peninsula and covers 3,237,500 km2...
. Similar winds in the area are sirocco
Sirocco
Sirocco, scirocco, , jugo or, rarely, siroc is a Mediterranean wind that comes from the Sahara and reaches hurricane speeds in North Africa and Southern Europe. It is known in North Africa by the Arabic word qibli or ghibli Sirocco, scirocco, , jugo or, rarely, siroc is a Mediterranean wind...
and simoom
Simoom
Simoom is a strong, dry, dust-laden local wind that blows in the Sahara, Palestine, Israel, Jordan, Syria, and the deserts of Arabian Peninsula. Alternative spellings include samiel, sameyel, samoon, samun, simoun, and simoon...
. From the Arabic word for 'fifty', throughout the Levant, these dry, dust-filled windstorms often blow sporadically over fifty days, hence the name.

In Egypt
Egypt
Egypt , officially the Arab Republic of Egypt, Arabic: , is a country mainly in North Africa, with the Sinai Peninsula forming a land bridge in Southwest Asia. Egypt is thus a transcontinental country, and a major power in Africa, the Mediterranean Basin, the Middle East and the Muslim world...
, khamsin usually arrives in April but occasionally occur in March and May, carrying great quantities of sand and dust from the deserts, with a speed up to 140 kilometers per hour, and a rise of temperatures as much as 20°C in two hours. It is believed to blow "at intervals for about 50 days", although it rarely occurs "more than once a week and last for just a few hours at a time." A 19th-century account of khamsin in Egypt goes:

These winds, though they seldom cause the thermometer of Fahrenheit to rise above 95° in Lower Egypt
Lower Egypt
Lower Egypt is the northern-most section of Egypt. It refers to the fertile Nile Delta region, which stretches from the area between El-Aiyat and Zawyet Dahshur, south of modern-day Cairo, and the Mediterranean Sea....
, or in Upper Egypt
Upper Egypt
Upper Egypt is the strip of land, on both sides of the Nile valley, that extends from the cataract boundaries of modern-day Aswan north to the area between El-Ayait and Zawyet Dahshur . The northern section of Upper Egypt, between El-Ayait and Sohag is sometimes known as Middle Egypt...
105°, are dreadfully oppressive, even to the natives. When the plague visits Egypt, it is generally in the spring; and the disease is most severe in the period of the khamáseen.

The same account relates that Muslims in Egypt "calculate the period of khamáseen ... to commence on the day immediately following the Copt
Copt
The Copts are the native Egyptian Christians , a major ethnoreligious group in Egypt....
ic festival of Easter Sunday
Easter
Easter is the central feast in the Christian liturgical year. According to the Canonical gospels, Jesus rose from the dead on the third day after his crucifixion. His resurrection is celebrated on Easter Day or Easter Sunday...
, and to terminate on the Day of Pentecost
Pentecost
Pentecost is a prominent feast in the calendar of Ancient Israel celebrating the giving of the Law on Sinai, and also later in the Christian liturgical year commemorating the descent of the Holy Spirit upon the disciples of Christ after the Resurrection of Jesus...
(or Whitsunday); an interval of forty-nine days."

During Napoleon
Napoleon I of France
Napoleon Bonaparte was a French military and political leader during the latter stages of the French Revolution.As Napoleon I, he was Emperor of the French from 1804 to 1815...
's Egyptian Campaign, the French soldiers had a hard time with khamsin: when the storm appeared "as a blood-stint in the distant sky", the natives went to take cover, while the French "did not react until it was too late, then choked and fainted in the blinding, suffocating walls of dust." During the North African Campaign
North African campaign
During the Second World War, the North African Campaign took place in North Africa from 10 June 1940 to 13 May 1943. It included campaigns fought in the Libyan and Egyptian deserts and in Morocco and Algeria and Tunisia .The campaign was fought between the Allies and Axis powers, many of whom had...
of the World War II
World War II
World War II, or the Second World War , was a global conflict lasting from 1939 to 1945, involving most of the world's nations—including all of the great powers—eventually forming two opposing military alliances: the Allies and the Axis...
, "allied and German troops were several times forced to halt in mid-battle because of sandstorms caused by khamsin ... Grains of sand whirled by the wind blinded the soldiers and created electrical disturbances that rendered compasses useless."

In Israel
Israel
The State of Israel is a parliamentary republic located in the Middle East, along the eastern shore of the Mediterranean Sea...
, khamsin is known more formally as sharav (שרב), and the Biblical
Bible
The Bible refers to any one of the collections of the primary religious texts of Judaism and Christianity. There is no common version of the Bible, as the individual books , their contents and their order vary among denominations...
term for khamsin is ruah qadīm (רוח קדים) or "east wind". 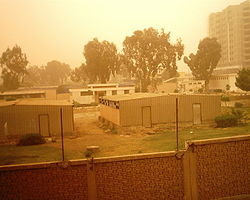 "This is not just a warm wind, but a dust-laden, suffocatingly hot wind! It blows in the desert regions of certain Arab-populated countries. Khamsin is the Arabic word for "fifty" and it is quite appropriate since this far from friendly wind blows for fifty days and during its "occupation" of the area all activity ceases and there is no outward sign of life. The natives merely remain inside their dwellings and resign themselves to waiting for Khamsin to use up the allotted time. It should be evident that the denizens of such a region have all learned how to count up to half a hundred...The music itself has a sort of lonely quality which is intended to portray the hopelessness of a situation that can only be met by perseverance and a determination to outlast the ever present Khamsin."