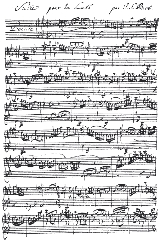 Overview
Music notation or musical notation is any system that represents aurally perceived music
Music
Music is an art form whose medium is sound and silence. Its common elements are pitch , rhythm , dynamics, and the sonic qualities of timbre and texture...
, through the use of written symbols
Modern musical symbols
Modern musical symbols are the marks and symbols that are widely used in musical scores of all styles and instruments today. This is intended to be a comprehensive guide to the various symbols encountered in modern musical notation.- Lines :- Clefs :...
.
The earliest form of musical notation can be found in a cuneiform
Cuneiform script
Cuneiform script )) is one of the earliest known forms of written expression. Emerging in Sumer around the 30th century BC, with predecessors reaching into the late 4th millennium , cuneiform writing began as a system of pictographs...
tablet that was created at Nippur
Nippur
Nippur was one of the most ancient of all the Sumerian cities. It was the special seat of the worship of the Sumerian god Enlil, the "Lord Wind," ruler of the cosmos subject to An alone...
, Iraq
Iraq
Iraq ; officially the Republic of Iraq is a country in Western Asia spanning most of the northwestern end of the Zagros mountain range, the eastern part of the Syrian Desert and the northern part of the Arabian Desert....
in about 2000 B.C. The tablet represents fragmentary instructions for performing music, that the music was composed in harmonies of thirds, and that it was written using a diatonic scale
Diatonic scale
In music theory, a diatonic scale is a seven note, octave-repeating musical scale comprising five whole steps and two half steps for each octave, in which the two half steps are separated from each other by either two or three whole steps...
.

I am trying to write western notation for an Indian song titled Tu jane naa. The print out gives me letters followed by plus signs. Can anyone tell me...
More
x