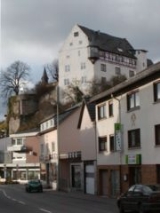 Katzenelnbogen originated as a castle
Castle
A castle is a type of fortified structure built in Europe and the Middle East during the Middle Ages by European nobility. Scholars debate the scope of the word castle, but usually consider it to be the private fortified residence of a lord or noble...
built on a promontory over the river Lahn
Lahn
The Lahn River is a -long, right tributary of the Rhine River in Germany. Its course passes through the federal states of North Rhine-Westphalia , Hesse , and Rhineland-Palatinate ....
around 1095. The lords of the castle became important local magnates, acquiring during the centuries some key and highly lucrative customs
Customs
Customs is an authority or agency in a country responsible for collecting and safeguarding customs duties and for controlling the flow of goods including animals, transports, personal effects and hazardous items in and out of a country...
rights on the Rhine. The Counts of Katzenelnbogen also built Burg Neukatzenelnbogen
Burg Katz
Katz Castle is a castle above the German town of St. Goarshausen in Rhineland-Palatinate. This magnificent castle stands on a ledge looking downstream from the riverside at St. Goarthe. It was first built around 1371 by Count Wilhelm II of Katzenelnbogen. The castle was bombarded in 1806 by...
and Burg Rheinfels
Burg Rheinfels
Rheinfels Castle is a castle ruin located in Sankt Goar, Germany overlooking the Rhine. It was started in 1245 by Count Diether V of Katzenelnbogen and was partially destroyed by French Revolutionary Army troops in 1797...
on the Rhine. The German family died out in 1479, while the Austrian lineage continued, and the county became disputed between Hesse
Hesse
Hesse or Hessia is both a cultural region of Germany and the name of an individual German state.* The cultural region of Hesse includes both the State of Hesse and the area known as Rhenish Hesse in the neighbouring Rhineland-Palatinate state...
and Nassau. In 1557, the former finally won, but when Hesse was split due to the testament of Philipp the Magnanimous, Katzenelnbogen was split as well, between Hesse-Darmstadt
Landgraviate of Hesse-Darmstadt
The Landgraviate of Hesse-Darmstadt was a member state of the Holy Roman Empire. It was formed in 1567 following the division of the Landgraviate of Hesse between the four sons of Philip I, the last Landgrave of Hesse....
and the small new secondary principality of Hesse-Rheinfels
Hesse-Rheinfels
Hesse-Rheinfels was created as a cadet line of Hesse for Philip II, Landgrave of Hesse-Rheinfels , landgrave from 1567 until 1583, and as a cadet line of Hesse-Kassel for Ernest, Landgrave of Hesse-Rheinfels , landgrave from 1627 until 1658.-First creation:Philip was the third son of Philip the...
. When the latter line expired in 1583, its property went to Hesse-Kassel
Hesse-Kassel
The Landgraviate of Hesse-Kassel or Hesse-Cassel was a state in the Holy Roman Empire under Imperial immediacy that came into existence when the Landgraviate of Hesse was divided in 1567 upon the death of Philip I, Landgrave of Hesse. His eldest son William IV inherited the northern half and the...
(or Hesse-Cassel), which added the inherited part of Katzenelnbogen to its side-line principality of Hesse-Rotenburg
Hesse-Rotenburg
Hesse-Rotenburg is a former German landgraviate created from the landgraviate of Hesse-Cassel in 1627. Independence ended in 1834 when the estates not bequeathed to princes Victor and Chlodwig of Hohenlohe-Waldenburg-Schillingsfurst were reunited with Hesse-Kassel.-History:The line of Hesse-Kassel ...
. After the Congress of Vienna
Congress of Vienna
The Congress of Vienna was a conference of ambassadors of European states chaired by Klemens Wenzel von Metternich, and held in Vienna from September, 1814 to June, 1815. The objective of the Congress was to settle the many issues arising from the French Revolutionary Wars, the Napoleonic Wars,...
, this part of Katzenelnbogen was given to Nassau in exchange for property that had been taken away from it; after the War of 1866
Austro-Prussian War
The Austro-Prussian War was a war fought in 1866 between the German Confederation under the leadership of the Austrian Empire and its German allies on one side and the Kingdom of Prussia with its German allies and Italy on the...
, with all Nassau, it became part of Prussia
Prussia
Prussia was a German kingdom and historic state originating out of the Duchy of Prussia and the Margraviate of Brandenburg. For centuries, the House of Hohenzollern ruled Prussia, successfully expanding its size by way of an unusually well-organized and effective army. Prussia shaped the history...
.

In 1945, Hesse-Darmstadt was united with most of the Prussian province of Hesse-Nassau, which included the former Hesse-Kassel
Hesse-Kassel
The Landgraviate of Hesse-Kassel or Hesse-Cassel was a state in the Holy Roman Empire under Imperial immediacy that came into existence when the Landgraviate of Hesse was divided in 1567 upon the death of Philip I, Landgrave of Hesse. His eldest son William IV inherited the northern half and the...
along with Nassau and the formerly Free City of Frankfurt
Frankfurt
Frankfurt am Main , commonly known simply as Frankfurt, is the largest city in the German state of Hesse and the fifth-largest city in Germany, with a 2010 population of 688,249. The urban area had an estimated population of 2,300,000 in 2010...
, to form the federal state of Hesse
Hesse
Hesse or Hessia is both a cultural region of Germany and the name of an individual German state.* The cultural region of Hesse includes both the State of Hesse and the area known as Rhenish Hesse in the neighbouring Rhineland-Palatinate state...
. Thus, Hesse now includes the larger part of former county of Katzenelnbogen
County of Katzenelnbogen
The County of Katzenelnbogen was an immediate state of the Holy Roman Empire. It existed between 1095 and 1479, when it was inherited by the Landgraves of Hesse.The estate comprised two separate territories...
. A smaller part of Nassau, including the old castle and village bearing the name of Katzenelnbogen, ended up as part of Rhineland-Palatinate
Rhineland-Palatinate
Rhineland-Palatinate is one of the 16 states of the Federal Republic of Germany. It has an area of and about four million inhabitants. The capital is Mainz. English speakers also commonly refer to the state by its German name, Rheinland-Pfalz ....
(part of the Rhein-Lahn and Westerwaldkreis
Westerwaldkreis
The Westerwaldkreis is a district in the east of Rhineland-Palatinate, Germany...
districts). One of the titles of the Queen of the Netherlands (the House of Orange-Nassau) is that of Countess of Katzenelnbogen.

The name Katzenelnbogen derives from the old Cattimelibocus. It consists of the ancient Germanic tribal name of the Chatti
Chatti
The Chatti were an ancient Germanic tribe whose homeland was near the upper Weser. They settled in central and northern Hesse and southern Lower Saxony, along the upper reaches of the Weser River and in the valleys and mountains of the Eder, Fulda and Weser River regions, a district approximately...
and Melibokus
Melibokus
The Melibokus is at 517 metres , the highest mountain in the Bergstraße region of southern Hesse, central Germany. The mountain overlooks the Rhine valley on the western fringe of the Odenwald region and is a local landmark, clearly visible for many miles...
, the Roman name of any mountains like the Harz
Harz
The Harz is the highest mountain range in northern Germany and its rugged terrain extends across parts of Lower Saxony, Saxony-Anhalt and Thuringia. The name Harz derives from the Middle High German word Hardt or Hart , latinized as Hercynia. The legendary Brocken is the highest summit in the Harz...
or the Teutoburg Forest
Teutoburg Forest
The Teutoburg Forest is a range of low, forested mountains in the German states of Lower Saxony and North Rhine-Westphalia which used to be believed to be the scene of a decisive battle in AD 9...
. Over the centuries the name changed to Katzenelnbogen: "cat
Cat
The cat , also known as the domestic cat or housecat to distinguish it from other felids and felines, is a small, usually furry, domesticated, carnivorous mammal that is valued by humans for its companionship and for its ability to hunt vermin and household pests...
's elbow".

In the history of wine
Wine
Wine is an alcoholic beverage, made of fermented fruit juice, usually from grapes. The natural chemical balance of grapes lets them ferment without the addition of sugars, acids, enzymes, or other nutrients. Grape wine is produced by fermenting crushed grapes using various types of yeast. Yeast...
, Katzenelnbogen is famous for the first documentation of Riesling
Riesling
Riesling is a white grape variety which originated in the Rhine region of Germany. Riesling is an aromatic grape variety displaying flowery, almost perfumed, aromas as well as high acidity. It is used to make dry, semi-sweet, sweet and sparkling white wines. Riesling wines are usually varietally...
grapes in the world: this was in 1435, when the storage inventory of Count John IV of Katzenelnbogen, a member of the Holy Roman high nobility, lists the purchase of vines of "Rieslingen".