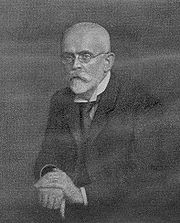 Karl Krumbacher was a German
Germany
Germany , officially the Federal Republic of Germany , is a federal parliamentary republic in Europe. The country consists of 16 states while the capital and largest city is Berlin. Germany covers an area of 357,021 km2 and has a largely temperate seasonal climate...
scholar who was an expert on Byzantine
Byzantine Empire
The Byzantine Empire was the Eastern Roman Empire during the periods of Late Antiquity and the Middle Ages, centred on the capital of Constantinople. Known simply as the Roman Empire or Romania to its inhabitants and neighbours, the Empire was the direct continuation of the Ancient Roman State...
culture.

He was born at Kürnach im Allgäu
Wiggensbach
Wiggensbach is a municipality in Bavaria. It is situated about 7 kilometres west of Kempten, the next greater town.Neighbour municipalities are Altusried in the north and Buchenberg in the south of the village. The municipality consists of Wiggensbach as the main village and Ermengerst and...
in Bavaria
Bavaria
Bavaria, formally the Free State of Bavaria is a state of Germany, located in the southeast of Germany. With an area of , it is the largest state by area, forming almost 20% of the total land area of Germany...
, and was educated at the Universities of Munich and Leipzig
University of Leipzig
The University of Leipzig , located in Leipzig in the Free State of Saxony, Germany, is one of the oldest universities in the world and the second-oldest university in Germany...
, and held the professorship of the middle ages
Medieval Greek
Medieval Greek, also known as Byzantine Greek, is the stage of the Greek language between the beginning of the Middle Ages around 600 and the Ottoman conquest of the city of Constantinople in 1453. The latter date marked the end of the Middle Ages in Southeast Europe...
and modern Greek language and literature in the former from 1897 to his death.

His greatest work is his Geschichte der byzantinischen Literatur von Justinian bis zum Ende des Ostroemischen Reiches (History of Byzantine literature from Justinian
Justinian I
Justinian I ; , ; 483– 13 or 14 November 565), commonly known as Justinian the Great, was Byzantine Emperor from 527 to 565. During his reign, Justinian sought to revive the Empire's greatness and reconquer the lost western half of the classical Roman Empire.One of the most important figures of...
to the fall of the Eastern Empire
Byzantine Empire
The Byzantine Empire was the Eastern Roman Empire during the periods of Late Antiquity and the Middle Ages, centred on the capital of Constantinople. Known simply as the Roman Empire or Romania to its inhabitants and neighbours, the Empire was the direct continuation of the Ancient Roman State...
, 1453), a second edition of which was published in 1897, with the collaboration of Albert Ehrhard (section on theology
Theology
Theology is the systematic and rational study of religion and its influences and of the nature of religious truths, or the learned profession acquired by completing specialized training in religious studies, usually at a university or school of divinity or seminary.-Definition:Augustine of Hippo...
) and Heinrich Gelzer
Heinrich Gelzer
Not to be confused with the German classical scholar Matthias Gelzer, who wrote on Julius Caesar and the Late Roman Republic.Heinrich Gelzer was a German classical scholar. He wrote also on Armenian mythology. He was the son of the Swiss historian Johann Heinrich Gelzer...
(general sketch of Byzantine history, AD 395-1453). The value of the work is greatly enhanced by the elaborate bibliographies contained in the body of the work and in a special supplement.

Krumbacher also founded the Byzantinische Zeitschrift (1892) and the Byzantinisches Archiv (1898). He travelled extensively and the results of a journey to Greece
Greece
Greece , officially the Hellenic Republic , and historically Hellas or the Republic of Greece in English, is a country in southeastern Europe....
appeared in his Griechische Reise (1886). Other works by him are: Kassia
Kassia
Kassia was a Byzantine abbess, poet, composer, and hymnographer. She is one of the first medieval composers whose scores are both extant and able to be interpreted by modern scholars and musicians...
(1897), a treatise on a 9th century Byzantine poetess, with the fragments; Michael Glykas (1894); Die griechische Litteratur das Mittelalters in Paul Hinneberg’s Die Kultur der Gegenwart, i.8 (1905); Das Problem der neugriechischen Schriftsprache (1902), in which he strongly opposed the efforts of the purists
Katharevousa
Katharevousa , is a form of the Greek language conceived in the early 19th century as a compromise between Ancient Greek and the Modern Greek of the time, with a vocabulary largely based on ancient forms, but a much-simplified grammar. Originally, it was widely used both for literary and official...
to introduce the classical style into modern Greek literature, and Populäre Aufsätze (1900).