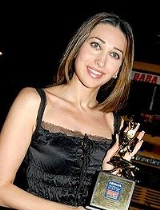 Encyclopedia
Karisma Kapoor often informally referred to as Lolo, is an India
India
India , officially the Republic of India , is a country in South Asia. It is the seventh-largest country by geographical area, the second-most populous country with over 1.2 billion people, and the most populous democracy in the world...
n actress who made her debut in 1991, and appears in Bollywood
Bollywood
Bollywood is the informal term popularly used for the Hindi-language film industry based in Mumbai , Maharashtra, India. The term is often incorrectly used to refer to the whole of Indian cinema; it is only a part of the total Indian film industry, which includes other production centers producing...
films. During her career, she has been part of many commercially and critically successful films, Raja Hindustani
Raja Hindustani
The soundtrack was composed by Nadeem Shravan. It consisted of tracks like "Kinna Sona Tenu" which was based on a song with the same title by Nusrat Fateh Ali Khan, and "Pardesi Pardesi" .- 1996 Filmfare Awards :Won* Filmfare...
being the most notable of them, as it was her biggest commercial success, and won Kapoor her first Filmfare Award for Best Actress. She won another Filmfare Award and a National Film Award for Best Supporting Actress
National Film Award for Best Supporting Actress
The National Film Award for Best Supporting Actress winners:...
for Dil To Pagal Hai
Dil To Pagal Hai
Dil To Pagal Hai is a Bollywood comedy/drama, released October 31, 1997, depicting the love lives of dancers in a musical dance troupe. The tag line is "Someone somewhere is made for you..." It was directed by Yash Chopra. It stars Shahrukh Khan, Madhuri Dixit and Karisma Kapoor, with an extended...
(1997). She surprised critics and audiences with her performances in films such as Fiza
Fiza
Fiza is a 2000 Indian film written and directed by Khalid Mohammed. The film stars Karisma Kapoor, Hrithik Roshan and Jaya Bachchan.- Synopsis :...
(2000) and Zubeidaa
Zubeidaa
Zubeidaa is a 2001 Indian film directed by Shyam Benegal and written by Khalid Mohammed. It stars Karisma Kapoor, Rekha, Manoj Bajpai, Surekha Sikri, Rajit Kapoor, Lillete Dubey, Amrish Puri, Farida Jalal, and Shakti Kapoor...
(2001), for which she earned Best Actress and Filmfare Critics Award for Best Actress
Filmfare Critics Award for Best Actress
The Filmfare Critics Award for Best Actress is given by Filmfare as part of its annual Filmfare Awards for Hindi films. The award is given by the chosen jury of critics assigned to the function, and is a derivation from a previous award known as the Filmfare Critics Award for Best Performance,...
trophies at Filmfare
Filmfare Awards
The Filmfare Awards are presented annually by The Times Group to honour both artistic and technical excellence of professionals in the Hindi language film industry of India. The Filmfare ceremony is one of the oldest and most prominent film events given for Hindi films in India. The awards were...
. Since 2003, Kapoor has been less active in cinema.

Kapoor was born in Mumbai
Mumbai
Mumbai , formerly known as Bombay in English, is the capital of the Indian state of Maharashtra. It is the most populous city in India, and the fourth most populous city in the world, with a total metropolitan area population of approximately 20.5 million...
to Randhir Kapoor
Randhir Kapoor
Randhir Kapoor is a Bollywood actor, producer and director. His nickname is Daboo.-Early life:Randhir Kapoor hails from the legendary Kapoor family. He is the eldest son of Raj Kapoor. He is a fourth generation Kapoor and comes from a distinguished Punjabi Hindu family who have been part of the...
, an actor popular during the 1970s and 80s, and actress Babita
Babita
Babita is an Indian actress. She is now better known as the mother of actresses Kareena Kapoor and Karisma Kapoor and the wife of Randhir Kapoor.- Early life :...
. She is the granddaughter of actor and filmmaker Raj Kapoor
Raj Kapoor
Known as Ranbir Raj Kapoor Rāj Kapūr, 14 December 1924 – 2 June 1988), also known as The Show-Man, was an Indian film actor, producer and director of Hindi cinema. He was the winner of nine Filmfare Awards, while his films Awaara and Boot Polish were nominated for the Palme d'Or at the...
, great-granddaughter of actor Prithviraj Kapoor
Prithviraj Kapoor
Prithviraj Kapoor , 3 November 1906 – 29 May 1972) was a pioneer of Indian theatre and of the Hindi film industry, who started his career as an actor, in the silent era of Hindi cinema, associated with IPTA and who founded Prithvi Theatres, a travelling theatre company based in Mumbai, in...
, sister of actress Kareena Kapoor
Kareena Kapoor
Kareena Kapoor , often informally referred to as Bebo, is an Indian actress who appears in Bollywood films. During her career, Kapoor has received six Filmfare Awards, among nine nominations, and has been noted for her performances in a range of film genres; these include her work from contemporary...
and niece of actor Rishi Kapoor
Rishi Kapoor
Rishi Kapoor is an Indian Bollywood actor, film producer and director.-Early life:Born in Chembur Mumbai, Kapoor is the second son of film director and star Raj Kapoor. He did his schooling with his brothers at Campion School,Mumbai. His brothers are well-known actors: Randhir Kapoor and Rajiv...
. Kapoor studied at the Cathedral and John Connon School
Cathedral and John Connon School
The Cathedral and John Connon School is a co-educational, private school located in Mumbai, Maharashtra, India, established in 1860.According to the Education World-C fore Survey of Schools 2010, the school has been ranked first in the all India ranking of the best schools in India.It was ranked...
in Mumbai until grade six.
She recently was found to be pregnant with twins.

Kapoor made her debut in the 1991 movie Prem Qaidi
Prem Qaidi
Prem Qaidi is 1991 Hindi movie directed by K. Murali Mohan Rao and starring debutante Karishma Kapoor, Harish Kumar, Paresh Rawal, Dalip Tahil, Asrani, Shafi Inamdar and Bharat Bhushan.-Soundtrack:...
, which was a semi-hit. Although most of her multiple releases from 1992-1996 failed to do well at the box office, she had some success with films like Jigar
Jigar
Jigar is a Bollywood 1992 Indian film directed by Farogh Siddique. It was inspired by the Hollywood blockbuster Bloodsport. Jigar was released in Diwali weekend and proved to be successful.-Storyline:...
(1992), Anari
Anari (1993 film)
Anari is 1993 Hindi film directed by K. Muralimohana Rao and starring Karishma Kapoor, Venkatesh, Suresh Oberoi. This film is a remake of 1991 Tamil film Chinna Thambi.- Plot :...
(1993), Raja Babu & Suhag (1994), Coolie No. 1
Coolie No. 1
Coolie No. 1 is a 1995 Hindi language movie directed by David Dhawan.The film stars Karisma Kapoor, Govinda, Shakti Kapoor, Kadar Khan, Sadashiv Amrapurkar with music by Anand-Milind. This movie was one of the first successful movie of Karisma Kapoor. Actor Govinda got Star Screen Award Special...
& Gopi Kishan (1995), Saajan Chale Sasural
Saajan Chale Sasural
Saajan Chale Sasural is a 1996 Bollywood comedy starring Govinda, Karisma Kapoor, Tabu, Kader Khan and Satish Kaushik. The film was directed by David Dhawan. It is based on the Mohan Babu starrer 1992 Telugu film Allari Mogudu...
(1996) and Jeet
Jeet (1996 film)
Jeet is a 1996 Indian Bollywood film directed by Raj Kanwar and produced by Sajid Nadiadwala. The film stars Sunny Deol, Salman Khan and Karisma Kapoor in lead roles...
(1996) Judwaa & Hero No 1(1997).

Kapoor also collaborated for the first time with the Rajshri Productions
Rajshri Productions
Rajshri Productions Pvt. Ltd. is a Hindi film production company. Rajshri partially works as a film distributor also. On 15 August 1947, Tarachand Barjatya established Rajshri Pictures Ltd., the film distribution division of Rajshri....
banner with Hum Saath-Saath Hain: We Stand United
Hum Saath-Saath Hain: We Stand United
Hum Saath-Saath Hain : We Stand United is a 1999 Indian film written and directed by Sooraj R. Barjatya. The film was distributed by the home production of Sooraj Barjatya, Rajshri Productions. The film stars Salman Khan, Karisma Kapoor, Saif Ali Khan, Sonali Bendre, Neelam Kothari, Mohnish Behl...
which also resulted in a hit. Her last release, Jaanwar opposite Akshay Kumar
Akshay Kumar
Akshay Kumar is an Indian film actor, producer and martial artist who has appeared in over a hundred Hindi films. When he began his acting career in the 1990s, he primarily starred in action films and was particularly known for his appearances in feature films commonly called the "Khiladi series",...
, was another box office hit, making her the most successful actress of the year.

In 2003, she played the leading role in the television series Karishma: A Miracle of Destiny. After her film, Baaz: A Bird In Danger which also released in 2003, she took a sabbatical from full time acting for three years. Mere Jeevan Saathi (2006) in which she played a negative role, was a delayed release.

In October 2008, alongside actor Arjun Rampal
Arjun Rampal
Arjun Rampal , born 26 November 1972, is an award-winning Indian actor who appears in Bollywood films, as well as a fashion model.- Film career :...
and director/choreographer Farah Khan
Farah Khan
Farah Khan is an Indian film director and choreographer. She is best known for her choreographical work in numerous Bollywood films. Khan has choreographed dance routines for more than a hundred songs in over 80 Hindi films. Khan has since become a noted Hindi film director as well...
, Kapoor began judging the dance show Nach Baliye 4
Nach Baliye
Nach Baliye is a dance, reality-television series on the Indian STAR Plus channel. The contestants are couples who are television stars. The first and second season aired on Star One and then shifted to Star Plus. Its name in Punjabi is inspired by a song from the Bollywood film Bunty Aur Babli .-...
.

In 2011, she officially announced she is returning to movies in a Vikram Bhatt's next, a 3D film titled Dangerous Ishq.

Karisma was engaged to Abhishek Bachchan
Abhishek Bachchan
Abhishek Bachchan is an Indian actor and producer. He is the son of Indian actors Amitabh Bachchan and Jaya Bachchan and is married to actress and former Miss World Aishwarya Rai....
. The engagement was announced in October 2002 on the 60th birthday of Abhishek's father, Amitabh Bachchan
Amitabh Bachchan
Amitabh Bachchan is an Indian film actor. He first gained popularity in the early 1970s as the "angry young man" of Hindi cinema, and has since appeared in over 180 Indian films in a career spanning more than four decades...
. Four months later in February 2003, they split up.
On 29 September 2003, she married industrialist Sanjay Kapur, CEO of Sixt India
Sixt india
SIXT International is a multinational corporation of India involved with automobile rental and automobile sales. Sixt India currently operates out of Delhi, Mumbai, Pune and Bangalore currently....
. In typical Kapoor tradition, Karisma was married at the home of her grandfather (the late Raj Kapoor): R K Cottage. They opted for an hour-long Sikh wedding ceremony. The couple's daughter Samaira was born on 11 March 2005. After the birth of her daughter, there was considerable rift between her and her husband. The couple has subsequently patched-up. She gave birth to their second child, son Kiaan Raj Kapoor on 12 March 2010.