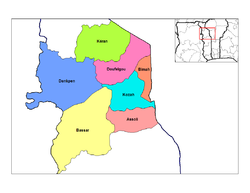 Kara is one of Togo's five regions
Regions of Togo
||Togo is divided into five regions :*Centrale *Kara *Maritime *Plateaux *Savanes The regions are divided into 30 prefectures and 1 commune.-See also:...
. Kara
Kara (Togo)
Kara is a city in northern Togo, situated in Kara Region, 413 km north of the capital Lomé. Situated in the country of Togo, near the other western African countries of Ghana, Burkina Faso and Benin. Kara is the capital of the region of the Kara and has a population of 109,287. The Haugeau...
is the regional capital.

Other major cities in the Kara region include Bafilo
Bafilo
Bafilo is a city in Togo south of Kara, in Kara Region, known for its large mosque, good wagassi cheese, its weaving industry and the nearby Bafilo Falls....
, Bassar
Bassar
Bassar is a town in Bassar Prefecture, Kara Region in Togo, situated west of Kara. The town has a population of 64,888.-Culture:Bassar was originally a centre for iron making. It now is known as the yam capital of Togo...
, and Niamtougou
Niamtougou
Niamtougou is a market town in Doufelgou District , Kara Region, Togo. It is located north of Kara on the nation's main North-South road, the Route Nationale No. 1. It is also the district capital and houses facilities of the Interior, Education, and Rural Development Ministries. There is a modest...
.

Kara is located north of Centrale Region
Centrale Region
Centrale is one of Togo's five regions. Sokodé is the regional capital. It is the smallest region in terms of population.Other major cities in the Centrale region include Tchamba and Sotouboua....
and south of Savanes Region
Savanes Region, Togo
Savanes is the northernmost of the five Regions of Togo. Dapaong is the regional capital. Another major town in the region is Mango.Savanes is divided into the prefectures of Kpendjal, Oti, Tandjouaré, and Tône....
. To the west lies the Northern Region
Northern Region (Ghana)
The Northern Region is the largest area of Ghana. As of 2009, it is divided into 20 districts. The region's capital is Tamale. Climatically, religiously, linguistically, and culturally, the region differs greatly from the politically and economically dominating regions of central and southern...
of Ghana
Ghana
Ghana , officially the Republic of Ghana, is a country located in West Africa. It is bordered by Côte d'Ivoire to the west, Burkina Faso to the north, Togo to the east, and the Gulf of Guinea to the south...
, and to the east lie the Atakora
Atakora Department
Atakora is the northwestern department of Benin, bordering Togo to the west and Burkina Faso to the north. Also, it borders the departments of Alibori, Borgou, and Donga. It is the most mountainous region of Benin, and the birth place of the president, Mathieu Kérékou...
(farther north) and Donga
Donga Department
Donga is one of the twelve departments of Benin. Donga was created in 1999 when the government split up the original six departments into twelve. Donga was split from Atakora. The capital of Donga is Djougou. The total area is 10,691 km.² or 4,128mi.²....
(farther south) Departments of Benin
Benin
Benin , officially the Republic of Benin, is a country in West Africa. It borders Togo to the west, Nigeria to the east and Burkina Faso and Niger to the north. Its small southern coastline on the Bight of Benin is where a majority of the population is located...
.
The source of this article is wikipedia, the free encyclopedia.  The text of this article is licensed under the GFDL.