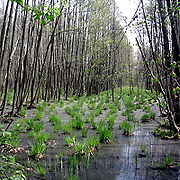 Kampinos Forest is a large forest complex located to the west of Warsaw
Warsaw
Warsaw is the capital and largest city of Poland. It is located on the Vistula River, roughly from the Baltic Sea and from the Carpathian Mountains. Its population in 2010 was estimated at 1,716,855 residents with a greater metropolitan area of 2,631,902 residents, making Warsaw the 10th most...
in Poland
Poland
Poland , officially the Republic of Poland , is a country in Central Europe bordered by Germany to the west; the Czech Republic and Slovakia to the south; Ukraine, Belarus and Lithuania to the east; and the Baltic Sea and Kaliningrad Oblast, a Russian exclave, to the north...
. It covers a large part of the ancient valley of Vistula
Vistula
The Vistula is the longest and the most important river in Poland, at 1,047 km in length. The watershed area of the Vistula is , of which lies within Poland ....
, between Vistula and Bzura
Bzura
Bzura is a river in central Poland, a tributary of the Vistula river , with a length of 166 kilometres and the basin area of 7,788 km2.-Towns and townships:*Zgierz*Aleksandrów Łódzki*Ozorków*Łęczyca*Łowicz*Sochaczew...
rivers. Once a gigantic forest covering 670 km² of central Poland, it currently covers roughly 240 km².

Most of the Kampinos forest is currently covered by Kampinos National Park
Kampinos National Park
Kampinos National Park is a National Park in east-central Poland, in Masovian Voivodeship, on the north-west outskirts of Warsaw. It has a sister park agreement with Indiana Dunes National Lakeshore, Indiana, United States....
(Kampinoski Park Narodowy). Among the distinctive features of the area is a combination of sandy dune
Dune
In physical geography, a dune is a hill of sand built by wind. Dunes occur in different forms and sizes, formed by interaction with the wind. Most kinds of dunes are longer on the windward side where the sand is pushed up the dune and have a shorter "slip face" in the lee of the wind...
s and marsh
Marsh
In geography, a marsh, or morass, is a type of wetland that is subject to frequent or continuous flood. Typically the water is shallow and features grasses, rushes, reeds, typhas, sedges, other herbaceous plants, and moss....
es, with dense pine
Pine
Pines are trees in the genus Pinus ,in the family Pinaceae. They make up the monotypic subfamily Pinoideae. There are about 115 species of pine, although different authorities accept between 105 and 125 species.-Etymology:...
and spruce
Spruce
A spruce is a tree of the genus Picea , a genus of about 35 species of coniferous evergreen trees in the Family Pinaceae, found in the northern temperate and boreal regions of the earth. Spruces are large trees, from tall when mature, and can be distinguished by their whorled branches and conical...
forest.
The source of this article is wikipedia, the free encyclopedia.  The text of this article is licensed under the GFDL.