Kam Tin or Kam Tin Heung (錦田鄉), is an area in the New Territories
New Territories
New Territories is one of the three main regions of Hong Kong, alongside Hong Kong Island and the Kowloon Peninsula. It makes up 86.2% of Hong Kong's territory. Historically, it is the region described in The Convention for the Extension of Hong Kong Territory...
, Hong Kong
Hong Kong
Hong Kong is one of two Special Administrative Regions of the People's Republic of China , the other being Macau. A city-state situated on China's south coast and enclosed by the Pearl River Delta and South China Sea, it is renowned for its expansive skyline and deep natural harbour...
. It is north of Tai Mo Shan
Tai Mo Shan
Tai Mo Shan has the highest peak in Hong Kong, with an altitude of 957 m. It is located approximately at the geographical centre of the New Territories....
and east of Yuen Long
Yuen Long
Yuen Long , formerly Un Long, is an area and town located in the northwest of Hong Kong, on the Yuen Long Plain. To its west lie Hung Shui Kiu and Ha Tsuen, to the south Shap Pat Heung and Tai Tong, to the east Au Tau and Kam Tin, and to the north Nam Sang Wai.-Name:The Cantonese name Yuen Long 元朗...
. It was formerly known as Sham Tin (岑田). Administratively, it is part of Yuen Long District
Yuen Long District
Yuen Long District , is one of the districts of Hong Kong located in the northwest of the New Territories. It had a population of 449,070 in 2001. The district has the youngest population of Hong Kong and the lowest income in the New Territories.-Geography:...
.

Many of Kam Tin's residents are from the Tang Clan
Tang Clan
The Tang Clan is one of the Great Five Clans of Hong Kong. The others are Man , Hau , Pang and Liu . The Tangs originated from Jishui of Jiangxi province and are considered to be native Hong Kong people, as they were the first immigrants to settle in what is now Hong Kong from what is now...
, who are of the Punti
Punti
The Punti, a rough transliteration of the Cantonese term for "original locality," refers to the Cantonese-speaking populations of Guangdong province in southern China...
culture, not Hakka
Hakka people
The Hakka , sometimes Hakka Han, are Han Chinese who speak the Hakka language and have links to the provincial areas of Guangdong, Jiangxi, Guangxi, Sichuan, Hunan and Fujian in China....
as is often misattributed. 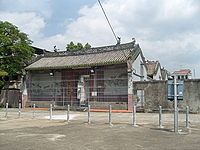 Kam Tin is the origin of the biggest indigenous Tang Clan
Tang Clan
The Tang Clan is one of the Great Five Clans of Hong Kong. The others are Man , Hau , Pang and Liu . The Tangs originated from Jishui of Jiangxi province and are considered to be native Hong Kong people, as they were the first immigrants to settle in what is now Hong Kong from what is now...
(鄧) in Hong Kong. The ancestor of indigenous Tang, Tang Hon Fat (鄧漢黻) settled his family from Jiangxi
Jiangxi
' is a southern province in the People's Republic of China. Spanning from the banks of the Yangtze River in the north into hillier areas in the south, it shares a border with Anhui to the north, Zhejiang to the northeast, Fujian to the east, Guangdong to the south, Hunan to the west, and Hubei to...
to Sham Tin in 973.

During the reign of Wanli Emperor
Wanli Emperor
The Wanli Emperor was emperor of China between 1572 and 1620. His era name means "Ten thousand calendars". Born Zhu Yijun, he was the Longqing Emperor's third son...
(1572–1620) of Ming Dynasty
Ming Dynasty
The Ming Dynasty, also Empire of the Great Ming, was the ruling dynasty of China from 1368 to 1644, following the collapse of the Mongol-led Yuan Dynasty. The Ming, "one of the greatest eras of orderly government and social stability in human history", was the last dynasty in China ruled by ethnic...
, Sham Tin was renamed Kam Tin.

Kat Hing Wai
Kat Hing Wai
Kat Hing Wai is a famous Punti walled village in Yuen Long District of Hong Kong. It often mistakenly believed to be Hakka, whose people have similar traditions. However the Punti people were from Southern China and the first to settle in Hong Kong. Kat Hing Wai's residents speak the Cantonese...
, is the most famous walled settlement
Walled villages of Hong Kong
Once common throughout China, walled villages can still be found in southern China and Hong Kong. Most of the walled villages in Hong Kong are located in the New Territories...
located in Kam Tin. It is a compact village consisting mainly of narrow row-houses and temples separated by small winding alleys. The wall was erected to fend off pirates and bandits who were common in the area in the last millennium. It was the site of a rebellion against British rule in 1899.

There is also the Yi Tai study hall in Kam Tin. It was built by the Tangs for the local students to study for the Chinese civil servants qualifications. It also houses a temple to the god of study, Man Cheung. 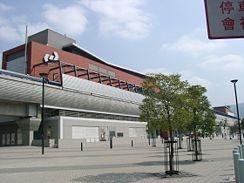 Kam Tin is served by the Kam Sheung Road Station of the MTR
MTR
Mass Transit Railway is the rapid transit railway system in Hong Kong. Originally opened in 1979, the system now includes 211.6 km of rail with 155 stations, including 86 railway stations and 69 light rail stops...
.