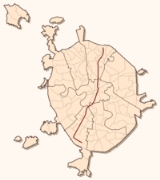 Encyclopedia
The Kaluzhsko–Rizhskaya Line is a line of the Moscow Metro
Moscow Metro
The Moscow Metro is a rapid transit system serving Moscow and the neighbouring town of Krasnogorsk. Opened in 1935 with one line and 13 stations, it was the first underground railway system in the Soviet Union. As of 2011, the Moscow Metro has 182 stations and its route length is . The system is...
, that originally existed as two separate radial lines, Rizhskaya and Kaluzhskaya opened in 1958 and 1962, respectively. Only in 1971 were they united into a single line as the central section connecting the stations Oktyabrskaya to Prospekt Mira was completed. It was also the first line in Moscow to have a cross-platform transfer. The Rizhsky radius is roughly aligned with a northern avenue Prospekt Mira, while the Kaluzhskiy radius generally follows a southwestern street Profsoyuznaya Ulitsa. Presently, the Kaluzhsko-Rizhskaya Line is the third busiest in the system with a passenger traffic rate of 1.015 million per day. It has a bi-directional length of 37.6 kilometres (23.4 mi), and a travel time of 56 minutes, typically it is coloured orange on Metro maps.

The Kaluzhsko–Rizhskaya Line was the first one in Moscow to be built in the time of the new epoch, when contrary to the old time-consuming manual work that produced the most famous stations in the system the De-Stalinization
De-Stalinization
De-Stalinization refers to the process of eliminating the cult of personality, Stalinist political system and the Gulag labour-camp system created by Soviet leader Joseph Stalin. Stalin was succeeded by a collective leadership after his death in March 1953...
policies of Nikita Khrushchev
Nikita Khrushchev
Nikita Sergeyevich Khrushchev led the Soviet Union during part of the Cold War. He served as First Secretary of the Communist Party of the Soviet Union from 1953 to 1964, and as Chairman of the Council of Ministers, or Premier, from 1958 to 1964...
forced the modernisation and development of new saving techniques.

Nonetheless the overall layout of the Metro was completed in 1954 when the ring
Koltsevaya Line
The Koltsevaya Line , , is a railway line of the Moscow Metro. The line was built in 1950-1954 encircling the central Moscow, and became crucial to the transfer patterns of passengers....
became fully operational. Moscow Metro planners immediately drew new areas of development which would come in radii starting at the ring. The first such radius became the Rizhsky, which would expand northwards from the Botanichesky Sad (now Prospekt Mira) station along the Mira avenue past the Rizhsky Rail Terminal
Rizhsky Rail Terminal
Rizhsky Rail Terminal is one of the nine rail terminals in Moscow, Russia. It was built in 1901.-Long distance:-Other destinations:-Suburban destinations:...
and terminate at the newly built All-Russia Exhibition Centre
All-Russia Exhibition Centre
All-Russia Exhibition Centre is a permanent general-purpose trade show in Moscow, Russia....
. Construction began in the mid 1950s and in 1958 the first four stations of the new radius opened. Already the first stations show a clear transition away from the Stalinist elements
Stalinist architecture
Stalinist architecture , also referred to as Stalinist Gothic, or Socialist Classicism, is a term given to architecture of the Soviet Union between 1933, when Boris Iofan's draft for Palace of the Soviets was officially approved, and 1955, when Nikita Khrushchev condemned "excesses" of the past...
in architecture, where it is obvious how the original project was altered to make it simpler and aesthetic. New construction methods, such as shortening the station vault diameters from 9.5 to 8.5 metres and new element junction methods dramatically reduced the building time.

On the opposite end of the ring, a second new radius was planned to be built – Kaluzhsky, which would follow on a southeast contour to the first newly built Cheryomushki
Cheryomushki District
Cheryomushki is a district of South-Western Administrative Okrug of Moscow, Russia. District's population: The district is delimited by Nakhimovsky Prospekt , Obrucheva Street , Sevastopolsky Prospekt , Profsoyuznaya Street, and Vlasova Street . The district is mostly residential, with an...
bedroom districts made from Khrushchyovka houses. Like the cheap buildings it expanded into the Kaluzhsky radius was made completely of any decorative architecture whatsoever. For the first time a joint project for a sub-surface station – the Sorkonozhka (Centepede) was created. Consisting of an enclosed concrete prism, it featured two supporting rows of pillars for the ceiling. The original design was standardised to the point where stations differed only in the colour of marble on the pillars and the ceramic tiling patterns of the walls. However the method allowed for even further increase in construction methods. A rational combination of using deep-level shield
Tunnel boring machine
A tunnel boring machine also known as a "mole", is a machine used to excavate tunnels with a circular cross section through a variety of soil and rock strata. They can bore through anything from hard rock to sand. Tunnel diameters can range from a metre to almost 16 metres to date...
tunnels and a sub-surface station pit allowed for this, and would become the most widely used technique in many . In 1962 the Kaluzhskaya Line was opened, and in 1964 it had its first extension to the new Kaluzhskoye depot where a temporary surface station was opened.

Originally it was thought that the two radii could exist on their own and terminate at the ring, however the dynamic passenger inflow immediately made the Metro planners realise the mistake. In an effort to correct this, it was decided to link the radii into a diameter and relieve the ring by allowing several transfer points inside the circumference. In 1970 the first extension northwards from Oktyabrskaya took place where the line met up with the Tagansko-Krasnopresnenskaya Line
Tagansko-Krasnopresnenskaya Line
The Tagansko-Krasnopresnenskaya is the busiest line of the Moscow Metro...
at Kitay-gorod, for the first time, a combined cross-platform
Cross-platform
In computing, cross-platform, or multi-platform, is an attribute conferred to computer software or computing methods and concepts that are implemented and inter-operate on multiple computer platforms...
transfer was opened with both stations built simultaneously. Finally at the end of 1971 the lines linked up with the central section forming the Kaluzhsko-Rizhskaya Line. The two stations that formed the final junction, used a new method of mounting hydroisolation, which was made separately and then suspended instead of mounting it piece by piece. This allowed a three-month work to be finished in little more than a week.

After the joining of the radii the line became a full transport artery. Several more extension projects were carried out. A northern one opened in 1978 finally allowed the late Soviet decorative architecture to blossom, four stations long, it extended past the Russian Botanical Gardens
Moscow Botanical Garden of Academy of Sciences
Tsytsin Main Moscow Botanical Garden of Academy of Sciences, founded in April 1945, is the largest in Europe. It covers a territory of approximately 3.61 km², bordering the All-Russian Exhibition Center, and contains a live exhibition of more than twenty thousand different species of plants...
into the new northern districts of Babushkinsky
Babushkinsky District, Moscow
Babushkinsky District, Moscow is an administrative district of North-Eastern Administrative Okrug, and one of the 125 raions of Moscow, Russia....
and Medvedkovo. The extensio also featured a new depot. Part of the track lies across Yauza River
Yauza River
This article is about a river in Moscow, a tributary of the Moskva River. There are three other Yauza rivers in Central Russia: tributaries of the Lama, Gzhat and Sestra....
though passengers can not see it as the track bridge is a covered tunnel.

At the same time several projects on the southern radius took place. In 1974 the temporary depot station was closed and the line expanded into Belyayevo. In 1980 Shabolovskaya was opened between Oktyabrskaya and Leninsky Prospekt stations. The original stretch was built under very difficult geological conditions, with pressure as much as 2.3 bars. The planned deep-level station was abandoned due to difficulties in building an escalator tunnel. However in 1980 the continued development in engineering techniques allowed for this to finish and the station was opened without any disruption to the service.

Currently the line spans through the entire city and no extensions are planned in the nearby future. However several projects exist. The first one was to connect the town of Mytishchi
Mytishchi
Mytishchi is a city and the administrative center of Mytishchinsky District of Moscow Oblast, Russia, which lies to the northeast of Russia's capital Moscow, on the Yauza River and the Moscow–Yaroslavl railroad. The city is the oblast's largest center for industry and education...
in the Moscow Oblast
Moscow Oblast
Moscow Oblast , or Podmoskovye , is a federal subject of Russia . Its area, at , is relatively small compared to other federal subjects, but it is one of the most densely populated regions in the country and, with the 2010 population of 7,092,941, is the second most populous federal subject...
with the Moscow Metro, this was however declared unnecessary by the mayor of the city. Another one was to extend from Bitsevsky Park to Annino of the Serpukhovsko-Timiryazevskaya Line
Serpukhovsko-Timiryazevskaya Line
Serpukhovsko–Timiryazevskaya Line , sometimes colloquially referred to as Grey Line , is a line of the Moscow Metro. Originally opened in 1983, it was extended throughout the 1980s and early 90s and again in the early 2000s...
, however it is unlikely this will be realized due to the preserved area of the Bitsa Park, and a newer project to bring the Butovskaya Light Metro Line
Butovskaya Light Metro Line
Butovskaya Line is a Light Metro line of the Moscow Metro. The line symbolizes an experiment of building rapid-transit in areas where tunnel boring is considered expensive and impractical...
to the southern radius.

The lack of transfer to the Serpukhovsko-Timiryazevskaya Line has been has led to a plan to build Yakimanka station between Oktyabrskaya and Tretyakovskaya, which will offer a transfer to Polyanka.

Several projects also exist to modernize the older stations. A second entrance was added to VDNKh in 1997 and Akademicheskaya has had a restoration of its ceramic tiled walls replacing them with aluminium planes. Recently it has emerged that the Moscow circular railway will be converted into a form of urban transport. If so then the conserved transfer from Leninsky Prospekt to the railway station Ploschad Gagarina will be opened.
The source of this article is wikipedia, the free encyclopedia.  The text of this article is licensed under the GFDL.