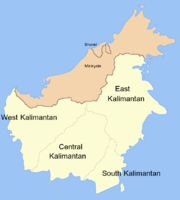 In English, the term Kalimantan refers to the Indonesia
Indonesia
Indonesia , officially the Republic of Indonesia , is a country in Southeast Asia and Oceania. Indonesia is an archipelago comprising approximately 13,000 islands. It has 33 provinces with over 238 million people, and is the world's fourth most populous country. Indonesia is a republic, with an...
n portion of the island of Borneo
Borneo
Borneo is the third largest island in the world and is located north of Java Island, Indonesia, at the geographic centre of Maritime Southeast Asia....
, while in Indonesian
Indonesian language
Indonesian is the official language of Indonesia. Indonesian is a normative form of the Riau Islands dialect of Malay, an Austronesian language which has been used as a lingua franca in the Indonesian archipelago for centuries....
, the term "Kalimantan" refers to the whole island of Borneo.

The Indonesian territory makes up 73% of the island by area, and 69.5% (13,772,543 at the 2010 Census of Indonesia) by population. The non-Indonesian parts of Borneo are of Brunei
Brunei
Brunei , officially the State of Brunei Darussalam or the Nation of Brunei, the Abode of Peace , is a sovereign state located on the north coast of the island of Borneo, in Southeast Asia...
(400,000) and East Malaysia
East Malaysia
East Malaysia, also known as Malaysian Borneo, is the part of Malaysia located on the island of Borneo. It consists of the Malaysian states of Sabah and Sarawak, and the Federal Territory of Labuan. It lies to the east from Peninsular Malaysia , which is located on the Malay Peninsula. The two are...
(5,625,000). The region within Indonesia is also known as Indonesian Borneo.