Encyclopedia
Kaleva, registered OH-ALL, was a civilian Junkers Ju 52
Junkers Ju 52
The Junkers Ju 52 was a German transport aircraft manufactured from 1932 to 1945. It saw both civilian and military service during the 1930s and 1940s. In a civilian role, it flew with over 12 air carriers including Swissair and Deutsche Luft Hansa as an airliner and freight hauler...
passenger and transport plane, belonging to the Finnish carrier Aero O/Y
Finnair
Finnair Plc is the flag carrier and largest airline of Finland, with its headquarters on the grounds of Helsinki Airport in Vantaa, Finland, and its main hub at Helsinki Airport. Finnair and its subsidiaries dominate both the domestic and international air travel markets in Finland. The largest...
. The aircraft was shot down by two Soviet
Soviet Union
The Soviet Union , officially the Union of Soviet Socialist Republics , was a constitutionally socialist state that existed in Eurasia between 1922 and 1991....
Ilyushin DB-3
Ilyushin DB-3
The Ilyushin DB-3 was a Soviet bomber aircraft of World War II. It was a twin-engined, low-wing monoplane that first flew in 1935. It was the precursor of the Ilyushin Il-4...
bombers during peacetime
Interim Peace
The Interim Peace was a short period in the history of Finland during the Second World War. The term is used for the time between the Winter War and the Continuation War, lasting a little over a year, from 13 March 1940 to 24 June 1941...
between the Soviet Union and Finland on June 14, 1940, while en route from Tallinn
Tallinn
Tallinn is the capital and largest city of Estonia. It occupies an area of with a population of 414,940. It is situated on the northern coast of the country, on the banks of the Gulf of Finland, south of Helsinki, east of Stockholm and west of Saint Petersburg. Tallinn's Old Town is in the list...
to Helsinki
Helsinki
Helsinki is the capital and largest city in Finland. It is in the region of Uusimaa, located in southern Finland, on the shore of the Gulf of Finland, an arm of the Baltic Sea. The population of the city of Helsinki is , making it by far the most populous municipality in Finland. Helsinki is...
, killing all 9 onboard.

A few minutes after taking off in Tallinn, Kaleva was joined at close range by two Soviet DB-3T torpedo bombers. The bombers opened fire with their machine guns and badly damaged Kaleva, making it crash into the water a few kilometers northeast of Keri lighthouse. All nine passengers and crew members on board were killed.

Estonian fishermen had witnessed the attack and crash of the plane. Shortly after the crash the Soviet submarine Shch-301
Shchuka class submarine
The Shchuka class submarines , also referred to as Shch or SC class submarines were a medium-sized class of Soviet submarines, built in large numbers and used during World War II...
(Щ-301) surfaced and inspected the fishing boats. After confiscating items taken from the wreck by the fishermen, the Soviets picked up diplomatic mail from the wreck and the sea. The future top-scoring Finnish pilot Ilmari Juutilainen
Ilmari Juutilainen
Eino Ilmari Juutilainen was a fighter pilot of the Ilmavoimat , and the top scoring non-German fighter pilot of all time...
was sent to inspect the crash site. After the Soviets spotted the Finnish airplane, the submarine hid its flag.

At the time of the incident Finland
Finland
Finland , officially the Republic of Finland, is a Nordic country situated in the Fennoscandian region of Northern Europe. It is bordered by Sweden in the west, Norway in the north and Russia in the east, while Estonia lies to its south across the Gulf of Finland.Around 5.4 million people reside...
was not at war with the Soviet Union. The attack was probably part of the Soviet preparations for the full-scale occupation of Estonia
Occupation of Baltic Republics
The occupation of the Baltic states refers to the military occupation of the three Baltic states: Estonia, Latvia and Lithuania by the Soviet Union under the auspices of the Molotov–Ribbentrop Pact on 14 June 1940 followed by their incorporation into the USSR as constituent republics, unrecognised...
, which took place two days after the Kaleva incident, on 16 June 1940. The occupation was preceded for several days by a Soviet air and naval blockade, which included preventing diplomatic mail from being sent abroad from Estonia. The passengers on the last flight of Kaleva included two German businessmen, two French
French people
The French are a nation that share a common French culture and speak the French language as a mother tongue. Historically, the French population are descended from peoples of Celtic, Latin and Germanic origin, and are today a mixture of several ethnic groups...
embassy couriers, one Swede, an American courier, and an Estonian woman. The French couriers had over 120 kilogram
Kilogram
The kilogram or kilogramme , also known as the kilo, is the base unit of mass in the International System of Units and is defined as being equal to the mass of the International Prototype Kilogram , which is almost exactly equal to the mass of one liter of water...
s of diplomatic mail in the plane. The American courier was reportedly transporting the U.S. military codes to safety from Estonia.

The Government of Finland
Government of Finland
Finland is a republic with a representative democracy governed accordingly to the principles of parliamentarism. Legislative power is vested in the Parliament of Finland . Executive power is exercised by the Cabinet, officially termed Council of State , which is led by the Prime Minister, the Head...
did not send any complaints or questions to the Soviets out of fear of hostile Soviet response, and the true reason for the crash was hidden from the public. This was due to the heavy pressure put upon Finland during the Interim Peace
Interim Peace
The Interim Peace was a short period in the history of Finland during the Second World War. The term is used for the time between the Winter War and the Continuation War, lasting a little over a year, from 13 March 1940 to 24 June 1941...
by the Soviets. After the outbreak of the Continuation War
Continuation War
The Continuation War was the second of two wars fought between Finland and the Soviet Union during World War II.At the time of the war, the Finnish side used the name to make clear its perceived relationship to the preceding Winter War...
, the incident was described in detail by the government. 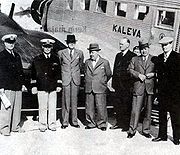 The commander of Shch-301 G. Golderg's report on the incident hold in the Russian State Naval Archives starts with the notice of a Finnish airplane on its way from Tallinn to Helsinki on June 14, 1940 at 15.05 PM. According to the report, the airplane was chased by two Soviet Tupolev SB
Tupolev SB
The Tupolev ANT-40, also known by its service name Tupolev SB , and development co-name TsAGI-40, was a high speed twin-engined three-seat monoplane bomber, first flown in 1934....
high-speed bombers. At 15.06 PM, the Finnish airplane caught fire and fell into the sea, 5.8 miles from the submarine. At 15.09 PM the submarine took course to the crash site and made it to the location by 15.47 PM. The submarine was met by 3 Estonian fishing boats near the detritus of the airplane. The Estonian fishermen were searched by lieutenants Aladzhanov, Krainov and Shevtshenko. All valuables found from the fishermen and in the sea were brought on board of the submarine: the items included about 100 kg. of diplomatic post, valuables and foreign currencies.
At 15.58 a Finnish fighter plane was noticed with the course towards the submarine. The airplane made 3 circles above the site and then flew towards Helsinki. The exact coordinates of the crash site were determined to be at 59°47′1"N 25°01′6"E.

Captain A. Matvejev's report states that on the board of Shch-301 was noticed an airplane crash on June 14, 1940 at 15.06 on 5.8 miles distance from the submarine. At the crash site 3 Estonian fishing boats and the remains of the airplane were found. At 15.58 PM a Finnish fighter plane made 3 circles above the crash site. By 16.10 PM all items found from the sea and from the hands of the fishermen were brought on board of the submarine. The items included about 100 kg of diplomatic mail, and valuables and currencies including: 1) 2 golden medals, 2) 2000 Finnish mark
Finnish mark
The Finnish markka was the currency of Finland from 1860 until 28 February 2002, when it ceased to be legal tender. The markka was replaced by the euro , which had been introduced, in cash form, on 1 January 2002....
s, 3) 10.000 Romanian leu
Romanian leu
The leu is the currency of Romania. It is subdivided into 100 bani . The name of the currency means "lion". On 1 July 2005, Romania underwent a currency reform, switching from the previous leu to a new leu . 1 RON is equal to 10,000 ROL...
s, 4)13.500 French franc
French franc
The franc was a currency of France. Along with the Spanish peseta, it was also a de facto currency used in Andorra . Between 1360 and 1641, it was the name of coins worth 1 livre tournois and it remained in common parlance as a term for this amount of money...
s, 5) 100 Yugoslav dinar
Yugoslav dinar
The dinar was the currency of the three Yugoslav states: the Kingdom of Yugoslavia , the Socialist Federal Republic of Yugoslavia and the Federal Republic of Yugoslavia between 1918 and 2003. The dinar was subdivided into 100 para...
s, 6) 90 Italian lira
Italian lira
The lira was the currency of Italy between 1861 and 2002. Between 1999 and 2002, the Italian lira was officially a “national subunit” of the euro...
s, 7) 75 US dollars, 8) 521 Soviet ruble
Soviet ruble
The Soviet ruble or rouble was the currency of the Soviet Union. One ruble is divided into 100 kopeks, ....
s, 9) 10 Estonian kroon
Estonian kroon
In 1992, coins were introduced in denominations of 5, 10, 20 & 50 senti, as well as 1 kroon. The 1 kroon was struck in cupronickel, the others in aluminum-bronze. However, in 1997, nickel-plated steel 20 senti were introduced, followed by aluminum-bronze 1 kroon in 1998. 5 senti coins were not...
s. All items were put on board of patrol boat "Sneg" and sent to Kronstadt
Kronstadt
Kronstadt , also spelled Kronshtadt, Cronstadt |crown]]" and Stadt for "city"); is a municipal town in Kronshtadtsky District of the federal city of St. Petersburg, Russia, located on Kotlin Island, west of Saint Petersburg proper near the head of the Gulf of Finland. Population: It is also...
.
The source of this article is wikipedia, the free encyclopedia.  The text of this article is licensed under the GFDL.