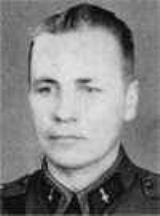 Encyclopedia
Eino Ilmari Juutilainen was a fighter
Fighter aircraft
A fighter aircraft is a military aircraft designed primarily for air-to-air combat with other aircraft, as opposed to a bomber, which is designed primarily to attack ground targets...
pilot of the Ilmavoimat (Finnish Air Force
Finnish Air Force
The Finnish Air Force is one of the branches of the Finnish Defence Forces. Its peacetime tasks are airspace surveillance, identification flights, and production of readiness formations for wartime conditions...
), and the top scoring non-German fighter pilot of all time. This makes him the top flying ace
Flying ace
A flying ace or fighter ace is a military aviator credited with shooting down several enemy aircraft during aerial combat. The actual number of aerial victories required to officially qualify as an "ace" has varied, but is usually considered to be five or more...
of the Finnish Air Force, leading all Finnish pilots in score against Soviet aircraft in World War II
World War II
World War II, or the Second World War , was a global conflict lasting from 1939 to 1945, involving most of the world's nations—including all of the great powers—eventually forming two opposing military alliances: the Allies and the Axis...
(1939–40 and 1941–1944), with 94 confirmed aerial combat victories in 437 sortie
Sortie
Sortie is a term for deployment or dispatch of one military unit, be it an aircraft, ship, or troops from a strongpoint. The sortie, whether by one or more aircraft or vessels, usually has a specific mission....
s. According to himself he achieved a total of 126 victories. He achieved 34 of his victories while flying the Brewster Buffalo
Brewster Buffalo
The Brewster F2A Buffalo was an American fighter aircraft which saw limited service early in World War II. Though the Buffalo won a competition against the Grumman F4F Wildcat in 1939 to become the US Navy's first monoplane fighter aircraft, it turned out to be a big disappointment...
fighter.

Juutilainen is the top scoring Finnish fighter pilot. He flew Fokker D.XXI
Fokker D.XXI
-See also:-References:NotesBibliography* De Jong, Peter. Le Fokker D.21 . Outreau, France: Éditions Lela Presse, 2005. ISBN 2-914017-26-X....
, Brewster Buffalo
Brewster Buffalo
The Brewster F2A Buffalo was an American fighter aircraft which saw limited service early in World War II. Though the Buffalo won a competition against the Grumman F4F Wildcat in 1939 to become the US Navy's first monoplane fighter aircraft, it turned out to be a big disappointment...
and Messerschmitt Bf 109
Messerschmitt Bf 109
The Messerschmitt Bf 109, often called Me 109, was a German World War II fighter aircraft designed by Willy Messerschmitt and Robert Lusser during the early to mid 1930s...
fighter planes. He was one of the four people who twice received the highest Finnish military decoration, the Mannerheim Cross
Mannerheim Cross
The Mannerheim Cross of Liberty is the highest Finnish military decoration. The medal was introduced after the Winter War and named after Field Marshal Carl Gustaf Emil Mannerheim...
, and is considered the highest scoring non-German ace of all time. Juutilainen finished the war without a single hit to his plane from enemy fighter airplanes (once he was forced to land after a friendly anti-aircraft
Anti-aircraft warfare
NATO defines air defence as "all measures designed to nullify or reduce the effectiveness of hostile air action." They include ground and air based weapon systems, associated sensor systems, command and control arrangements and passive measures. It may be to protect naval, ground and air forces...
gun fired at his Bf 109). Like fighter aces Erich Hartmann
Erich Hartmann
Erich Alfred Hartmann , nicknamed "Bubi" by his comrades and "The Black Devil" by his Soviet enemies, was a German World War II fighter pilot and is the highest-scoring fighter ace in the history of aerial warfare...
and Saburo Sakai
Saburo Sakai
Sub-Lieutenant was a Japanese naval aviator and flying ace of the Imperial Japanese Navy during World War II. Sakai was the Imperial Navy's fourth-ranking ace and Japan's second leading fighter pilot to survive the war ....
, Juutilainen never lost a wingman in combat. 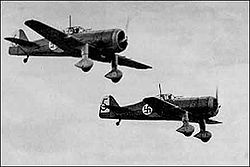 Juutilainen entered the Finnish military on 9 September 1932 for his compulsory military service, serving as a pilot in the Finnish Air Force
Finnish Air Force
The Finnish Air Force is one of the branches of the Finnish Defence Forces. Its peacetime tasks are airspace surveillance, identification flights, and production of readiness formations for wartime conditions...
starting from 1935. On 1 May 1935, Juutilainen was promoted to sergeant. He was transferred to LeLv 24 on March 3, 1939. This unit operated from Utti
Utti
Utti is a village in Kouvola, Finland. In 1789 the Battle of Utti took place there between Swedish and Russian forces. In 1918 General Carl Gustaf Mannerheim set up the first Finnish Air Force base in the village. Today, Utti is best known for the Utti Jaeger Regiment, a helicopter base and a...
. In October 1939, with the situation worsening, the squadron moved to Immola, closer to the Finnish-Soviet frontier. During the Winter War (that broke on 30 November 1939 ) he flew the Fokker D.XXI.
During that conflict he achieved two individual victories and one shared.

Still a sergeant, Juutilainen scored his first victory on 19 December 1939, shooting down an Ilyushin DB-3
Ilyushin DB-3
The Ilyushin DB-3 was a Soviet bomber aircraft of World War II. It was a twin-engined, low-wing monoplane that first flew in 1935. It was the precursor of the Ilyushin Il-4...
bomber and damaging two more.

He became a Brewster Buffalo "ace" on 21 July 1941 when he destroyed a Polikarpov I-153
Polikarpov I-153
The Russian Polikarpov I-153 Chaika was a late 1930s Soviet biplane fighter. Developed as an advanced version of the I-15 with a retractable undercarriage, the I-153 fought in the Soviet-Japanese combats in Mongolia and was one of the Soviet's major fighter types in the early years of the Second...
'Chaika'. He was flying one of six 3/Llv 24 Buffaloes scrambled to intercept Soviet fighters from 65th ShAP that were strafing Finnish troops near Käkisalmi.
Few days later, on 1 August, Ist Lt Karhunen's seven fighters destroyed six I-16s near Rautjarvi
Rautjärvi
Rautjärvi is a municipality of Finland.It is located in the province of Southern Finland and is part of the South Karelia region. The municipality has a population of and covers an area of ofwhich is water. The population density is....
and WO
Warrant Officer
A warrant officer is an officer in a military organization who is designated an officer by a warrant, as distinguished from a commissioned officer who is designated an officer by a commission, or from non-commissioned officer who is designated an officer by virtue of seniority.The rank was first...
Juutilainen claimed two of them.
On the morning of 6 February, while reconnoitring the Petrovkiy-Jam region with other LLv 24 pilots he intercepted seven SB
Tupolev SB
The Tupolev ANT-40, also known by its service name Tupolev SB , and development co-name TsAGI-40, was a high speed twin-engined three-seat monoplane bomber, first flown in 1934....
bombers escorted by 12 MiG-3s.

Juutilainen claimed two SBs.
He later recalled:
On 27–28 March 1942, 3/LLv 24 moved to Immola in preparation for a Finnish Army offensive on Suursaari, in the Gulf of Finland. On 28 March, WO Juutilainen, in patrol with Sgt Huotari, attacked some "Chaikas" of 11 IAP over the Suurkyla shoreline, at Gogland, and shot down two of them. These air victories took Juutilainen's tally to 22, some 20 of which had been scored flying the Brewster, between 9 July 1941 and 28 March 1942. A month later, on 26 April, he became his unit's first recipient of the Mannerheim Cross, the highest Finnish military decoration.
Although being grossly outnumbered, over the Gulf of Finland, LeLv 24 pilots were more experienced than their Soviet opponents from Red Banner Baltic Fleet. Even when they had the advantage of surprise and height, Soviet pilots did not succeed in shooting down Finnish pilots.

Still, on 20 September, he took off with Capt Jorma Karhunen and 3/LeLv 24 pilots for a patrol of the Kronstadt
Kronstadt
Kronstadt , also spelled Kronshtadt, Cronstadt |crown]]" and Stadt for "city"); is a municipal town in Kronshtadtsky District of the federal city of St. Petersburg, Russia, located on Kotlin Island, west of Saint Petersburg proper near the head of the Gulf of Finland. Population: It is also...
-Tolbukhin
Tolbukhin
Tolbukhin can refer to:* The former name of Dobrich, a Bulgarian town* Fyodor Tolbukhin, Soviet military commander* Aro Tolbukhin, Hungarian salesman and presumed serial killer, executed in 1981...
-Seiskari
Seiskari
Seskar is an island in the Gulf of Finland, part of the Leningrad Oblast of Russia. The island was an independent municipality of Finland populated by Finns at least since 16th century, until 1940, when ownership was transferred to the Soviet Union following the Moscow Peace Treaty...
region. Near the Estonian coast, they were bounced by ten Soviet fighters. But the Finnish quickly reacted and managed to down three of their opponents. WO Juutilainen was credited with two kills in his Buffalo BW-364.

He refused an officer commission, fearing it would keep him from flying.

After the wars, he served in the air force until 1947. He worked as a professional pilot until 1956, flying people in his De Havilland Moth
De Havilland Moth
The de Havilland Moths were a series of light aircraft, sports planes and military trainers designed by Geoffrey de Havilland. In the late 1920s and 1930s they were the most common civil aircraft flying in Britain and during that time every light aircraft flying in the UK was commonly referred to...
. He flew for the last time in 1997, piloting a Finnish Air Force F-18 Hornet
F/A-18 Hornet
The McDonnell Douglas F/A-18 Hornet is a supersonic, all-weather carrier-capable multirole fighter jet, designed to dogfight and attack ground targets . Designed by McDonnell Douglas and Northrop, the F/A-18 was derived from the latter's YF-17 in the 1970s for use by the United States Navy and...
.