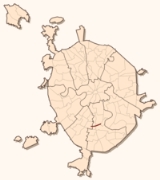 The history of this small line begins in the Moscow urban development plan that was adopted in the early 1960s. The plan focused on extending the Zamoskvoretsky radius of the then Gorkovsko-Zamoskvoretskaya Line (GZL) to the south. Using the ideal of simplified singular architectural pillar-trispan station design (sorokonozhka) that was prominent at the time, construction began in the mid 1960s of extending the Metro past the Kolomenskoye
Kolomenskoye
Kolomenskoye is a former royal estate situated several kilometers to the south-east of the city-centre of Moscow, Russia, on the ancient road leading to the town of Kolomna...
nature reserve and Nagatino industrial zone up to the station of Kashirskaya and then splitting into two directions one into the rapidly growing districts of Saburovo and Zyuzino and the other one into the future districts of Orekhovo and Borisovo. The former branch was to open as part of the extension and would feature a new depot, whilst the second branch would remain in perspective for a decade more whilst the latter districts were being built. It was the feature of the first (Kakhovskaya) branch that made the whole line appear unlike the standard layout that Moscow Metro radii, which follow a more or less tangental path to the central ring, instead after Kashirskaya the line becomes almost parallel.

Although it was a practical reason, as the stations of the Kakhovskaya Line connect three major transport arteries, the Kashira Highway which continues on to become the M4 (E111) motorway going southwards to the Caucasus; the Varshava highway, although named after Warsaw, its direction is actually southwards as the M2 (E105) towards Ukraine and Crimea. In addition the line also crosses the Paveletsky direction railway. Thereby the unorthodox layout was justified in its transport importance. In addition most of the residents who were settled in the districts which the line expanded into were families of workers of the Likhachev Factory Plant
Zavod Imeni Likhacheva
Zavod imeni Likhachova, more commonly called ZIL is a major Russian truck and heavy equipment manufacturer, which also produced armored cars for most Soviet leaders, as well as buses, armored fighting vehicles, and aerosani...
(ZiL), the largest in Moscow, who aided the construction of the Metro so that the residents would have a direct transport to work via Avtozavodskaya station. However the most inspiring reasons of all would be the actual development plan itself rather than the practical reasons. The plan had a very ambitious project that coincided with the traditional radial layout of Moscow - to feature a second parallel ring that would allow passengers to bypass the city centre altogether, and in the future the stations of the Kakhovskaya Line would become part of it.

The line formally opened in August 1969 and for more than a decade the operation was continuous. However by the early 1980s the future districts of Orekhovo and Zyablikovo were actively growing and were in desperate need of a Metro, thus construction began on the second branch. However the original idea was that upon the completion of the second, longer branch, the Kakhovskaya would close and remain closed until the large ring would be complete. On December 30, 1984 the Orekhovo branch was opened, and the Kakhovskaya was closed.

And on December 31, 1984 the Orekhovo branch was closed and Kakhovskaya was reopened. A flood in the new tunnel forced the closure of the new stations, and the extensive insistence of ZiL convinced the city authorities not to close the shorter branch. This however created a number of problems. One of which was the track arrangement at Kashirskaya where the southbound trains directions' separate only after the station, not before, thus preventing proper use of the cross-platform ability
Cross-platform interchange
A cross-platform interchange is a type of interchange between different lines in a metro system. The term originates with the London Underground; such layouts exist in other networks but are not commonly so named...
. Moreover the new branch resulted in massive rise of passengers, and the 2:1 ratio was not enough to deal with the more important Orekhovo passengers.

In early 1995 construction was completed on the reversal sidings behind Kashirskaya and finally the Kakhovskaya branch was separated into separate a formal line. This took place on August 11, 1995.

The line shares the Zamoskvoretskoye depot (№ 7) with the Zamoskvoretskaya line, and seven 81-717/714 and four 81-720/721 yauza trains previously from depot petchatniki trains were allocated to the line and shortened to six carriages.

The future of the three station segment is questionable, although the second ring is indeed inside Moscow Metro's planned objectives, often its pathway is corrected and sometimes leaves the Kakhovskaya Line out. In any case the present financial situation means that the large ring line is as distant as it was forty years ago when the stations first opened. But in spite of reasons, all passengers say that this line must be extended anyway to lines 6 and 1 (Westbound) and eastbound extenstion is also vital to service full 8-cars trains.
The source of this article is wikipedia, the free encyclopedia.  The text of this article is licensed under the GFDL.