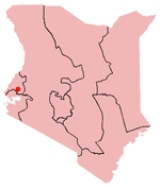 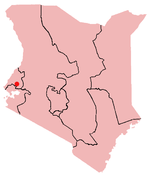 Kakamega is a town in western Kenya
Kenya
Kenya , officially known as the Republic of Kenya, is a country in East Africa that lies on the equator, with the Indian Ocean to its south-east...
lying about 30 km north of the Equator
Equator
An equator is the intersection of a sphere's surface with the plane perpendicular to the sphere's axis of rotation and containing the sphere's center of mass....
. It is the headquarters of kakamega county. The town has a population of 73,607 (1999 census).

Kakamega is 52 km north of Kisumu
Kisumu
Kisumu is a port city in western Kenya at , with a population of 355,024 . It is the third largest city in Kenya, the principal city of western Kenya, the immediate former capital of Nyanza Province and the headquarters of Kisumu County. It has a municipal charter but no city charter...
, the third largest city in Kenya and a port city on Lake Victoria
Lake Victoria
Lake Victoria is one of the African Great Lakes. The lake was named for Queen Victoria of the United Kingdom, by John Hanning Speke, the first European to discover this lake....
.

Local Inhabitants are mostly the Luhya tribe, whose economic activity is mainly farming and fishing.

Kakamega serves as the headquarters of Kenya's largest sugar producing firm, Mumias Sugar, located in the village of Mumias.

Kakamega Forest
Kakamega Forest
Kakamega Forest is situated in Western Province Kenya, north-west of the capital Nairobi, and near to the border with Uganda. It is said to be Kenya's last remnant of the ancient Guineo-Congolian rainforest that once spanned the continent....
is the main tourist destination in the area. Another attraction is the Crying Stone of Ilesi located along the highway towards Kisumu. It is a 40 metres high rock dome resembling a human figure whose "eyes" drop water.

Kakamega forms a municipality with ten wards (Amalemba, Bukhulunya, Central, Mahiakalo, Maraba, Matende, Milimani, Musaa, Shibiriri and Sichilayi). All of them belong to Lurambi Constituency, which has a total of fifteen wards. The remaining five are located within Kakamega County Council, the rural council of Kakamega District.

Kakamega area receives a very high amount of annual precipitation and contains Kakamega Forest
Kakamega Forest
Kakamega Forest is situated in Western Province Kenya, north-west of the capital Nairobi, and near to the border with Uganda. It is said to be Kenya's last remnant of the ancient Guineo-Congolian rainforest that once spanned the continent....
, a preserve which is a remnant of a rainforest that stretched west through Uganda
Uganda
Uganda , officially the Republic of Uganda, is a landlocked country in East Africa. Uganda is also known as the "Pearl of Africa". It is bordered on the east by Kenya, on the north by South Sudan, on the west by the Democratic Republic of the Congo, on the southwest by Rwanda, and on the south by...
.

As a rainforest, the canopy of the trees has grown into a thin mesh of interlocking top branches that block most sunlight from reaching the ground below, resulting in less vegetation at the ground level. With few bushes along the darkened forest floor, the main obstacle is ancient fallen tree trunks blocking the paths between the standing trees. The German funded project BIOTA East is working in the forest since 2001, whereby firstly forest inventories for all sorts of life forms were performed and the aim is to find strategies for a sustainable use of the forest.

More than 400 species of birds have been found in the Kakamega rainforest. The many song birds fill the air with various birdcalls.

Kakamega is also home to Africa's largest and most aggressive cobra, the Kakamega forest cobra
Naja melanoleuca
The Forest Cobra, also known as the Black and White Cobra is a species of cobra in the Elapidae family, native to Africa....
. Reputed by locals to spend a lot of time in the trees, stories abound of fearsome attacks on unsuspecting passers-by. Other snakes in the area include the forest adder
Bitis gabonica
Bitis gabonica is a venomous viper species found in the rainforests and savannas of Sub-Saharan Africa. This is not only the largest member of the genus Bitis, but also the world's heaviest viperid and it has the longest fangs ,and the highest venom yield of any venomous snake...
, black mamba, and the green mamba.

Although Kakamega is not the focus of a large number of aid agencies, some international non-profits are involved in the area. Among them are the ones listed below.

Kakamega Orphan Project
Kakamega Orphan Project
The Kakamega Orphan Project is a partnership between a local community in Kakamega, Kenya and its supporting organization based in the US. Together the Kenyans and the Friends of Kakamega offer shelter, education, food, and love to vulnerable children orphaned by the AIDS epidemic in western...
is a Quaker founded initiative that helps local Kakamega children who have been orphaned by AIDS. This non-profit provides meals, education, shelter, healthcare, and other essential support structures to over one hundred needy orphans. It is funded by a US partner organization, the Friends of Kakamega.

CES Canada (Community Education Services Canada) est. 2004 is a Canadian non-profit based in the greater Toronto area. Based on the four cornerstones of education, water, health and nutrition, it provides hope for secondary school aged youth orphaned by the HIV/Aids pandemic. Operating in a 1600 sq km area surrounding Kakamega, CES Kenya impacts on some 5,000 students. This organization provides access to education for AIDS orphans and other AIDS-affected children.

ACCES (African Canadian Continuing Education Society) is a Canadian non-profit that provides long-term funding to needy students from primary school all the way through technical college, nursing school, or university.

Kenya Aid is an Australian based organisation that helps inhabitants of rural Kenya access quality preventative and primary health care solutions. Committed to reducing the burden of disease and improving the quality of health services in developing countries, Kenya Aid's main focus is on preventing and effectively treating Kenya's three biggest killers - HIV, malaria and TB. Additionally, Kenya Aid is tackling two often neglected health issues in Western Kenya; the adequate management of female menstruation and Tungiasis, an inflammatory skin disease that is caused by the parasitic sand flee Tunga penetrans, or jiggers. See and

The "Health Aid Kenya" project is improving the qualities of health services - collecting surplus laboratory and hospital equipment at Danish hospitals etc., and create changes at dispensaries and health centres in the Kakamega district and surrounding areas in Western Kenya. The main focus is to install microscopes and electricity (solar cell panels) at specific locations and thereby secure proper diagnoses of malaria in the rural areas. The project also provide needed equipment to Kakamega Provincial General Hospital - and support the hospital create a pathological department which the hospital is preparing in cooperation with the local university.

Kakamega is home to Masinde Muliro University of Science and Technology
Masinde Muliro University of Science and Technology
Masinde Muliro University of Science and Technology, formerly Western College of Science and Technology, is a public university in Kenya. The university is named after Masinde Muliro, a beloved Kenyan politician who helped found the school. Muliro died in 1992....
. This campus offers courses in Engineering
Engineering
Engineering is the discipline, art, skill and profession of acquiring and applying scientific, mathematical, economic, social, and practical knowledge, in order to design and build structures, machines, devices, systems, materials and processes that safely realize improvements to the lives of...
, Computer Science
Computer science
Computer science or computing science is the study of the theoretical foundations of information and computation and of practical techniques for their implementation and application in computer systems...
, Education
Education
Education in its broadest, general sense is the means through which the aims and habits of a group of people lives on from one generation to the next. Generally, it occurs through any experience that has a formative effect on the way one thinks, feels, or acts...
, Disaster Management, Journalism and Mass Communication, Science, Nursing, Criminology and many others.
The source of this article is wikipedia, the free encyclopedia.  The text of this article is licensed under the GFDL.