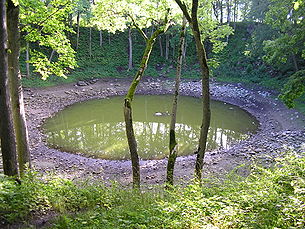 Kaali is a group of 9 meteorite
Meteorite
A meteorite is a natural object originating in outer space that survives impact with the Earth's surface. Meteorites can be big or small. Most meteorites derive from small astronomical objects called meteoroids, but they are also sometimes produced by impacts of asteroids...
crater
Impact crater
In the broadest sense, the term impact crater can be applied to any depression, natural or manmade, resulting from the high velocity impact of a projectile with a larger body...
s located on the Estonia
Estonia
Estonia , officially the Republic of Estonia , is a state in the Baltic region of Northern Europe. It is bordered to the north by the Gulf of Finland, to the west by the Baltic Sea, to the south by Latvia , and to the east by Lake Peipsi and the Russian Federation . Across the Baltic Sea lies...
n island of Saaremaa
Saaremaa
Saaremaa is the largest island in Estonia, measuring 2,673 km². The main island of Saare County, it is located in the Baltic Sea, south of Hiiumaa island, and belongs to the West Estonian Archipelago...
. Formed in the 7th century BC
7th century BC
The 7th century BC started the first day of 700 BC and ended the last day of 601 BC.The Assyrian Empire continued to dominate the Near East during this century, exercising formidable power over neighbors like Babylon and Egypt. In the last two decades of the century, however, the empire began to...
or about 4000 years ago (estimates vary), it is one of the most recent craters created by an impact event
Impact event
An impact event is the collision of a large meteorite, asteroid, comet, or other celestial object with the Earth or another planet. Throughout recorded history, hundreds of minor impact events have been reported, with some occurrences causing deaths, injuries, property damage or other significant...
and the only known major impact event that has occurred in a populated area.

Prior to the 1930s, the main crater was thought to have been a volcanic caldera
Caldera
A caldera is a cauldron-like volcanic feature usually formed by the collapse of land following a volcanic eruption, such as the one at Yellowstone National Park in the US. They are sometimes confused with volcanic craters...
. Its meteoritic origins were first conclusively demonstrated by Ivan Reinvald in 1937.

The impact is thought to have occurred in the Holocene
Holocene
The Holocene is a geological epoch which began at the end of the Pleistocene and continues to the present. The Holocene is part of the Quaternary period. Its name comes from the Greek words and , meaning "entirely recent"...
, around 4000 ± 1000 years ago. The craters were formed by an incoming meteor with an estimated impact velocity of between 10 and 20 km/s with a total mass of between 20 and 80 metric tonnes.

At an altitude of 5–10 km, the meteorite broke into pieces and fell to the Earth in fragments, the greatest of which produced a crater with a diameter of 110 m and a depth of 22 m. Kaali Lake exists in the bottom of this crater. Eight smaller craters are also associated with this bombardment. Their diameters range from 12 to 40 meters and their respective depths vary from one to four meters. They are all within one kilometer of the main crater.

At the time of the impact, Estonia was in the Nordic Bronze Age
Nordic Bronze Age
The Nordic Bronze Age is the name given by Oscar Montelius to a period and a Bronze Age culture in Scandinavian pre-history, c. 1700-500 BC, with sites that reached as far east as Estonia. Succeeding the Late Neolithic culture, its ethnic and linguistic affinities are unknown in the absence of...
and the site was forested with a small human population. The impact energy of about 80 TJ (20 kilotons of TNT) is comparable with that of the Hiroshima bomb
Little Boy
"Little Boy" was the codename of the atomic bomb dropped on Hiroshima on August 6, 1945 by the Boeing B-29 Superfortress Enola Gay, piloted by Colonel Paul Tibbets of the 393rd Bombardment Squadron, Heavy, of the United States Army Air Forces. It was the first atomic bomb to be used as a weapon...
blast. It incinerated forests within a 6 km radius.

Scholars maintain that the event figured prominently in regional mythology
Estonian mythology
Estonian mythology is a complex of myths belonging the Estonian folk heritage and literary mythology.Information about the pre-Christian and medieval Estonian mythology is scattered in historical chronicles, travellers' accounts and in ecclesiastical registers...
. It was, and still is, considered a sacred lake. There is archaeological evidence that it may well have been a place of ritual sacrifice
Sacrifice
Sacrifice is the offering of food, objects or the lives of animals or people to God or the gods as an act of propitiation or worship.While sacrifice often implies ritual killing, the term offering can be used for bloodless sacrifices of cereal food or artifacts...
. At some point during the early Iron Age
Iron Age
The Iron Age is the archaeological period generally occurring after the Bronze Age, marked by the prevalent use of iron. The early period of the age is characterized by the widespread use of iron or steel. The adoption of such material coincided with other changes in society, including differing...
, the lake was surrounded by a stone wall measuring 470 meters in length, with a median width of about 2.5 meters and an average height of 2.0 meters.

Finnish mythology
Finnish mythology
Finnish mythology is the mythology that went with Finnish paganism which was practised by the Finnish people prior to Christianisation. It has many features shared with fellow Finnic Estonian mythology and its non-Finnic neighbours, the Balts and the Scandinavians...
has stories that may originate with the formation of Kaali. One of them is in runes 47, 48 and 49 of the Kalevala
Kalevala
The Kalevala is a 19th century work of epic poetry compiled by Elias Lönnrot from Finnish and Karelian oral folklore and mythology.It is regarded as the national epic of Finland and is one of the most significant works of Finnish literature...
epic: Louhi
Louhi
Louhi is a queen of the land known as Pohjola in Finnish mythology and the mythology of Lapland.-In mythology:Louhi is described as a powerful witch with the ability to change shape and weave mighty enchantments. She is also the main opponent of Väinämöinen and his group in the battle for the...
, the evil wizard, steals the Sun and fire from people, causing total darkness. Ukko
Ukko
In Finnish mythology, Ukko, in Estonian mythology Uku, is a god of sky, weather, crops and other natural things. He is the most significant god in Finnish and Estonian mythologies, and created the goddess Ilmatar, creator of the world. The Finnish word ukkonen, thunderstorm, is derived from his...
, the god of the sky, orders a new Sun to be made from a spark. The virgin of the air starts to make a new Sun, but the spark drops from the sky and hits the ground. This spark goes to an "Aluen" or "Kalevan" lake and causes its water to rise. Finnish heroes see the ball of fire falling somewhere "behind the Neva river
Neva River
The Neva is a river in northwestern Russia flowing from Lake Ladoga through the western part of Leningrad Oblast to the Neva Bay of the Gulf of Finland. Despite its modest length , it is the third largest river in Europe in terms of average discharge .The Neva is the only river flowing from Lake...
" (the direction of Estonia from Karelia
Karelia
Karelia , the land of the Karelian peoples, is an area in Northern Europe of historical significance for Finland, Russia, and Sweden...
). The heroes head that direction to seek fire, and they finally gather flames from a forest fire.

According to a theory first proposed by Lennart Meri
Lennart Meri
Lennart Georg Meri was a writer, film director and statesman who served as the second President of Estonia from 1992 to 2001. Meri was a leader of the Estonian independence movement.-Early life:...
, it is possible that Saaremaa was the legendary Thule
Thule
Thule Greek: Θούλη, Thoulē), also spelled Thula, Thila, or Thyïlea, is, in classical European literature and maps, a region in the far north. Though often considered to be an island in antiquity, modern interpretations of what was meant by Thule often identify it as Norway. Other interpretations...
island, first mentioned by ancient Greek geographer Pytheas
Pytheas
Pytheas of Massalia or Massilia , was a Greek geographer and explorer from the Greek colony, Massalia . He made a voyage of exploration to northwestern Europe at about 325 BC. He travelled around and visited a considerable part of Great Britain...
, whereas the name "Thule" could have been connected to the Finnic word tule ("(of) fire") and the folklore of Estonia, which depicts the birth of the crater lake in Kaali. Kaali was considered the place where "The sun went to rest."